PAUL ACROSS AMERICA
US Route 49 runs from Gulfport, Mississippi, on the Gulf Coast, northwesterly and northerly to Piggott, in far northeastern Arkansas.  In downstate Mississippi, US Route 49 is a very important route, connecting Gulfport, Hattiesburg, and Jackson.  North of Jackson, US Route 49 runs more northerly than northwesterly, splitting in Yazoo City and reconvening in the village of Tutwiler.  (The branches are labeled "49W" and "49E".)  In northwestern Mississippi, US Route 49 joins US Route 61 for a short distance starting in Clarksdale, but then US Route 49 turns away across the Mississippi River, penetrating into Arkansas.  In Arkansas, US Route 49 passes through Brinkley, Jonesboro, and Paragould, before ending at US Route 62 in Piggott.  The southern end in Gulfport is an intersection with US Route 90.  That southern segment south of Jackson is what gives US Route 49 its number; for the rest of its routing, the number is too low to be as far west as it is.  But what are you going to do when a route has a diagonal part? 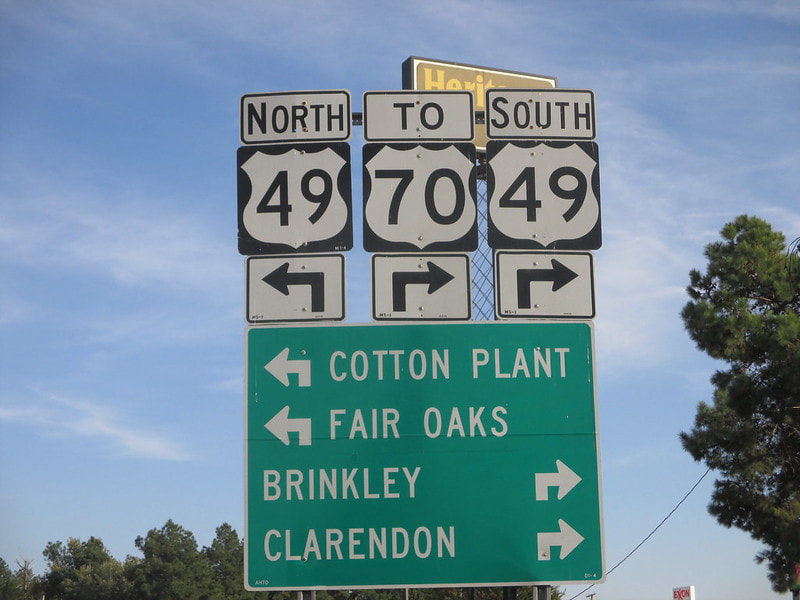 My photo for US Route 49 was taken on the eastbound offramp from Interstate 40 that meets up with US Route 49 in Brinkley, Arkansas.  Most US highway markers in Arkansas use the skinny font and skinny shield symbol like the one on the left side in the photo, but I was delighted to find the full-sized one on the right side.  This photo was taken in October 2014, on the final leg of the first Gulf Coast trip.  I used the same photo for my US Route 70 shield.
Back to the nationwide main page.
Back to the home page.