PAUL ACROSS AMERICA
Interstate 96 runs from Detroit, Michigan, west-northwesterly across all of Michigan's Lower Peninsula, to a city on the Lake Michigan shoreline known as Muskegon.  The purpose of Interstate 96 is to connect Detroit, Lansing, Grand Rapids, and Muskegon.  It never leaves the state of Michigan.  The eastern end is at Interstate 75, just west of downtown Detroit.  From there, Interstate 96 heads northwest and west to a 4-way junction where it joins Interstate 275 north; continuing west is the Michigan Highway 14 freeway with a seamless transition to Interstate 94 at Ann Arbor.  Interstate 96 follows Interstate 275 north for a while before splitting west-northwesterly to head away from Metro Detroit. It wraps around the southern and western sides of Lansing, but Interstate 496 is provided as an alternate directly through the city.  From the Lansing area, Interstate 96 continues west-northwest to secure its distinction as the highway connecting Michigan's largest city to the state's second-largest city, Grand Rapids.  Beyond Grand Rapids is another thirty miles of lightly-trafficked freeway, linking Grand Rapids to Muskegon.  The western end of Interstate 96 is at US Route 31 in Muskegon, Michigan. 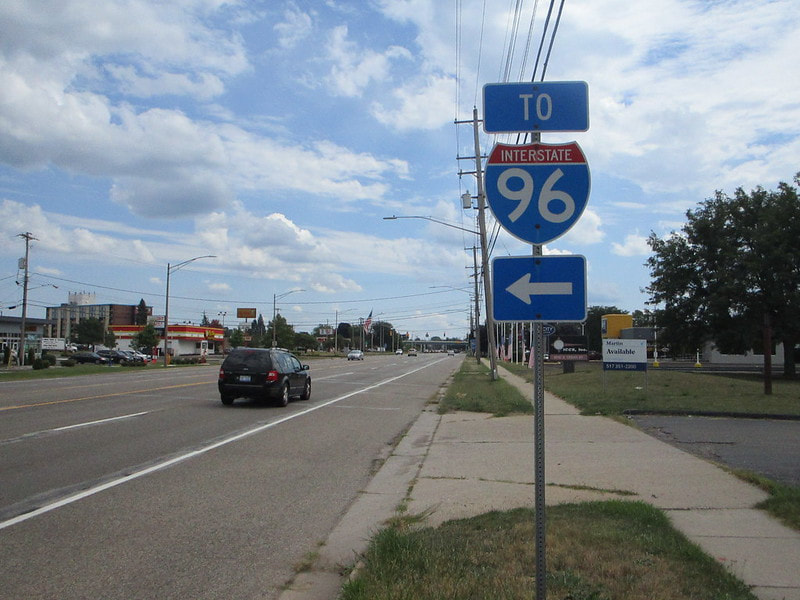 My photo of an Interstate 96 was taken looking south along Cedar Street in Lansing Michigan, at its junction with Interstate 96's exit number 104. Most of Michigan's signs mentioning freeways are unisigns with a green background, and Interstate 96 only enters Michigan. This means that finding a cutout shield of Interstate 96 is rather difficult.  I did find this one, though.  This photo was taken on a Michigan trip in August 2020.
Back to the nationwide main page.
Back to the home page.