PAUL ACROSS AMERICA
US Route 25 is a north-south route from Cincinnati, Ohio, to Brunswick, Georgia.  The highway's northern end is at the north end of the Clay Wade Bailey Bridge in Cincinnati, Ohio.  US Routes 42 and 127 also make their way across this bridge, and a turn east on Third Street will bring traffic to US Routes 27, 50, and 52, as well.  From Cincinnati, US Route 25 runs southward alongside the Interstate 75 corridor into eastern Tennessee, where it takes a drastic eastern turn across the Great Smoky Mountains.  Between Corbin, Kentucky, and Newport, Tennessee, US Route 25 splits into two separate alignments, labeled "US Route 25W" and "US Route 25E".  US Route 25W heads straight south to Knoxville before turning easterly; US Route 25E cuts southeast to Middlesboro, Kentucky, before heading south through Morrisville, Tennessee.  After re-converging at Newport, Tennessee, US Route 25 continues east to Asheville, North Carolina, where it finally resumes going in a southward direction. US Route 25 reaches Greenville, South Carolina, and Greenwood, South Carolina, in the west-central part of the state.  It crosses into Augusta, Georgia, and leads south to Statesboro, Georgia, where it probably should have ended.  The remainder of US Route 25 overlays the designations of US Route 301 and US Route 341, until the very last mile.  The very last mile runs independently of US Route 341 in Brunswick, Georgia, just before ending at US Route 17. 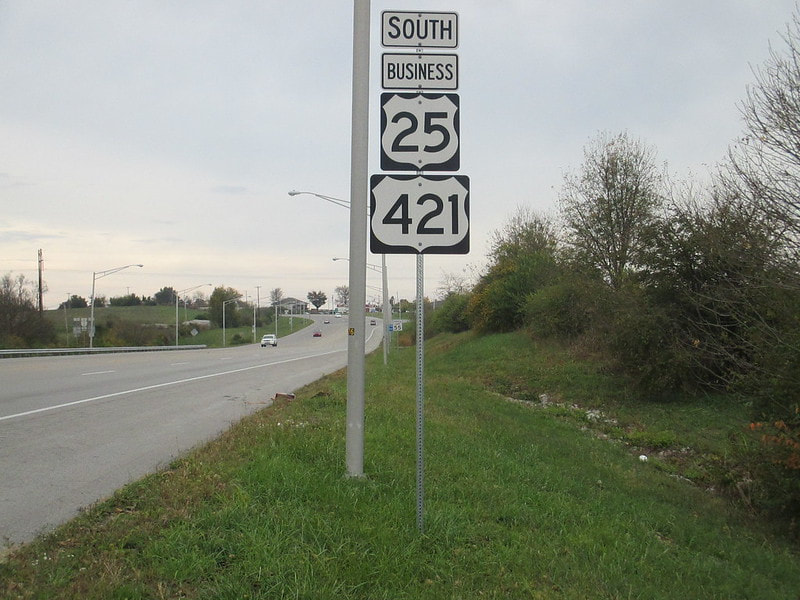 My photo for US Route 25 comes from Main Street in Richmond, Kentucky.  A pit stop for gas led me to encounter this northward-facing sign, as I was making my way home from my second Gulf Coast trip in November, 2016.  Even though this photo was taken with the aperture facing south toward the sun, a rare occurrence in my routesnapping, the overcast skies meant that this wouldn't sabotage the lighting.  In the Richmond, Kentucky area, US Routes 421 and 25 wrap around a the north and east sides of town via a highway bypass, but the business alignment, shown here, still carries traffic through downtown.
Back to the nationwide main page.
Back to the home page.