PAUL ACROSS AMERICA
US Route 206 runs north-south, splitting down the middle of New Jersey's northern section, and continuing midway through the southern part of the state.  It runs from Milford, Pennsylvania, a mile outside of New Jersey's northern tip, south to Trenton and Hammonton.  That northern end in Milford is at US Route 6, and US Route 206 starts down US Route 209 before soon splitting away from it across the Delaware River.  US Route 206 cuts south to Trenton, at the point where New Jersey's western border caves the farthest inward.  US Route 206 wraps around the western side of the bend in the Delaware River (the one that causes the western border's concavity), and heads nearly due-south again.  The southern end is at US Route 30 in Hammonton, northwest of Atlantic City. 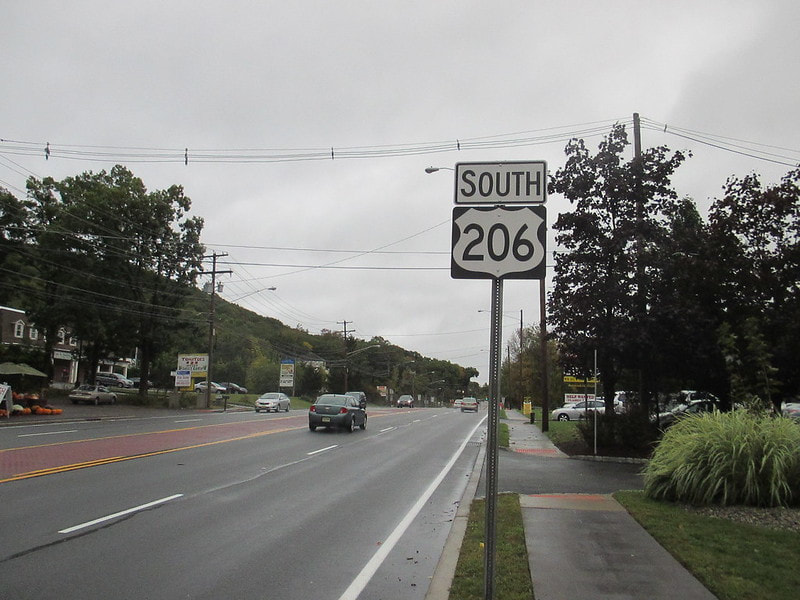 My photo of US Route 206 is a southbound reassurance marker in Stanhope, New Jersey.  The route marker shown in the photo faces north toward southbound traffic on US Route 206, just north of Interstate 80. Along my October 2015 trip to the Northeast, stopped in the Stanhope-Netcong area to photograph both US highways that are (nearly) exclusive to New Jersey: US Route 206 and US Route 46.
Back to the nationwide main page.
Back to the home page.