PAUL ACROSS AMERICA
US Route 221 runs from Lynchburg, Virginia, southwest to become a southward route through the highlands of the Carolinas, across Georgia to end in the eastern part of the Florida panhandle.  The start in Lynchburg is at an interchange with US Route 29's business alignment.  From there US Route 221 zigzags west through Lynchburg, leaving town to head for Roanoke, Virginia, alongside US Route 460.  It heads southwest from Roanoke, Virginia, to Boone, North Carolina, where it starts to head roughly due south.  US Route 221 passes through the hills and mountains of the western Carolinas, making its way through Marion, Rutherfordton, and Spartanburg.  US Route 221 continues south-southwesterly across west-central South Carolina, east-central Georgia, and south-central Georgia, before entering its final state of Florida.  US Route 221's southern end is at Perry, Florida, where the panhandle meets the peninsula, at US Route 19 and US Route 98. 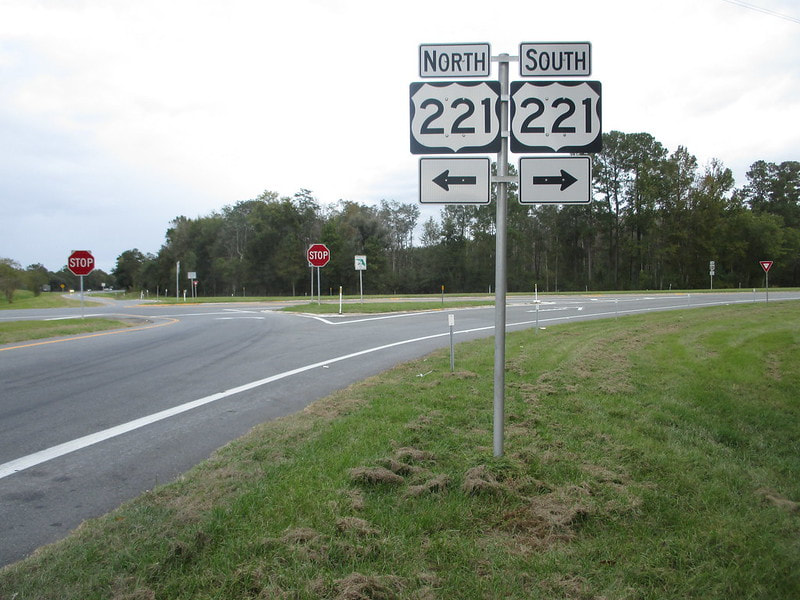 My photo for US Route 221 comes from the eastbound offramp at its interchange with Interstate 10.  This is near Greenville, Florida, the next incorporated village north of Perry at the highway's southern end.  I took this photo along the detour east to Florida that took place during my second Gulf Coast trip in November, 2016.
Back to the nationwide main page.
Back to the home page.