PAUL ACROSS AMERICA
US Route 201 runs north out of southern Maine, bound for Quebec City in Canada.  It doesn't enter any state other than Maine.  The southern end is at a junction with US Route 1 in a town called Brunswick, fairly close to the Atlantic Coast; easy access to Portland is provided by continuing south on US Route 1 from here.  US Route 201 heads north alongside Interstate 295 to Gardiner, and it continues alongside Interstate 95 through Augusta to Fairfield.  At Fairfield, US Route 201 diverges from the Interstate 95 corridor, heading into the wilderness. In northwestern Maine, US Route 201 crosses into Quebec, Canada, becoming Route 173, and eventually Autoroute 73, the main north-south freeway into Quebec City. 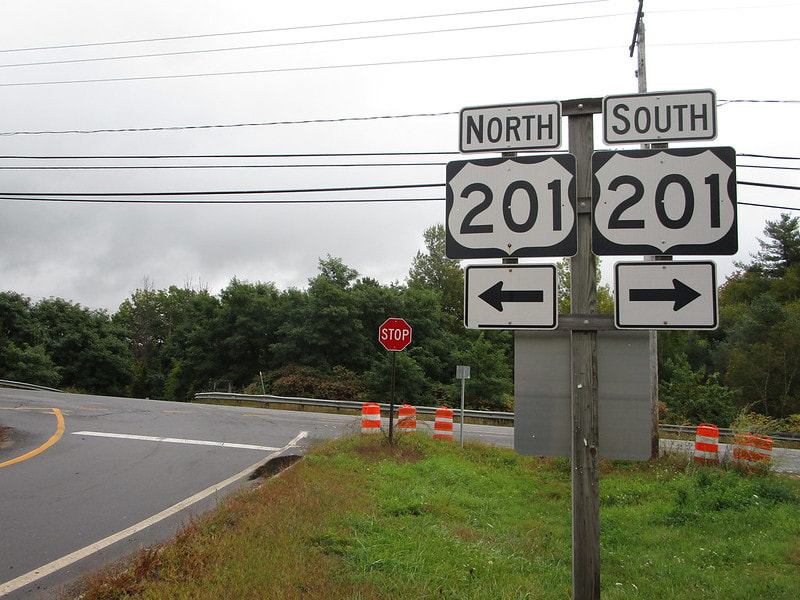 My photo for US Route 201 comes from the interchange it uses to connect to Interstate 95, near Fairfield, Maine.  The southbound offramp from Interstate 95 wraps around and points drivers east at a stop sign with US Route 201; the sign assembly shown faces those travelers pointing themselves east.  In other words, the assembly in the photo faces west on the north side of the interchange.  This photo was taken on the way home from eastern Canada and Acadia National Park, in October 2019.
Back to the nationwide main page.
Back to the home page.