PAUL ACROSS AMERICA
US Route 14 runs from Chicago, Illinois, to the eastern entrance to Yellowstone National Park, in northwestern Wyoming.  The northern end occurs at US Route 41 at the far northern end of the City of Chicago, right near the northern end of Lake Shore Drive.  The first stretch of US Route 14 runs northwesterly from there to Janesville, Madison, and La Crosse, in Wisconsin.  It crosses the Mississippi River out of La Crosse into Minnesota, so it can run through Winona and across the southern part of the state.  US Route 14 continues across central South Dakota to the town of Wall, right next to Badlands National Park, where it joins Interstate 90 west through Rapid City and into Wyoming.  US Route 14 detours from Interstate 90 once from Sundance to Moorcroft; then it actually, factually departs from Interstate 90 at Gillette, following a separate route nearer to Wyoming's northern border. US Route 14 passes through Sheridan before reaching Greybull, where US Route 16 and US Route 20 both join the highway from the south.  The three concurrent routes continue west through Cody to the eastern gate of Yellowstone National Park, where US Route 14 and US Route 16.  US Route 20 continues farther west, into the park and beyond. 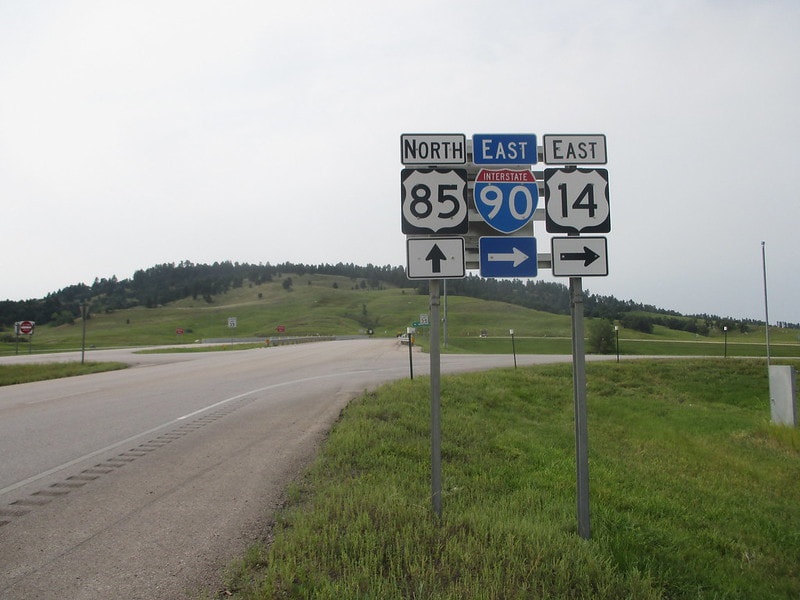 My photo for US Route 14 comes from an interchange along Interstate 90 near Spearfish, South Dakota.  US Route 14 runs concurrently with Interstate 90 across all of western South Dakota, and this interchange in particular is where US Route 85 joins in from the south.  US Route 85 turns westerly along Interstate 90 and US Route 14 for a short distance around Spearfish, and the signage depicted sits at the interchange where that happens.  The sign assembly faces south, at the southeast corner of the junction where the eastbound ramps meet, telling northbound traffic on US Route 85 what their options are.  This photo was taken in August 2018, returning home from the drive to the Pacific Ocean.
Back to the nationwide main page.
Back to the home page.