PAUL ACROSS AMERICA
US Route 4 runs east-west across southern New Hampshire and southern Vermont, protruding westward into New York where the route turns from westerly to southerly, ending near Albany.  US Route 4's western end is at US Route 20, across the Hudson River from Albany, New York, near the town of Rensselaer.  From there, it heads north along the eastern bank of the river, through Troy, to Hudson Falls, where the river suddenly turns westerly (rather, the easterly course becomes a southerly course). At that point, US Route 4 turns northeasterly away from the Hudson.  Near Whitehall, New York, US Route 4 crosses into Vermont and finally starts going easterly, as a good even-numbered route should. It passes through Rutland, reaching the New Hampshire border at White River Junction, Vermont.  US Route 4 then crosses into Lebanon, New Hampshire, continuing east through Concord to Portsmouth, where it ends.  The easternmost stretch is concurrent with New Hampshire Route 16, and both routes end at an interchange with Interstate 95 and US Route 1. 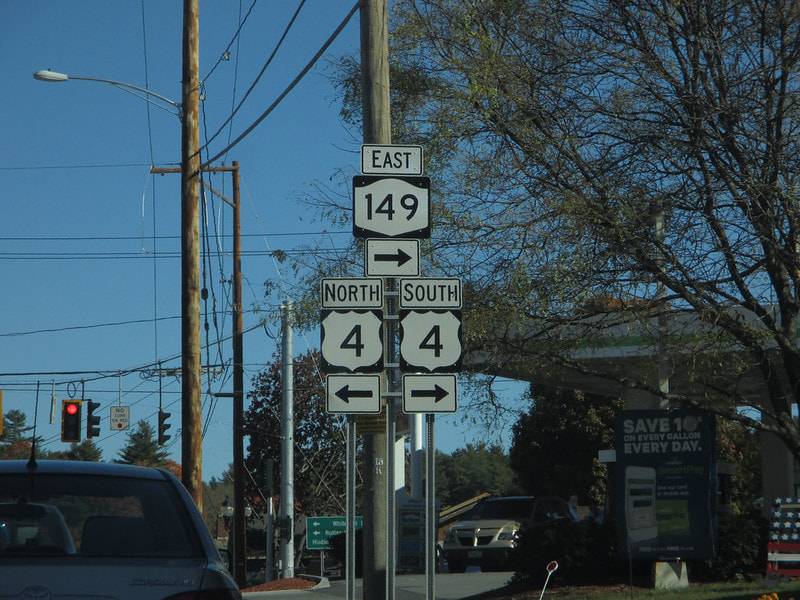 My photo for US Route 4 comes from Fort Ann, New York, the second town over from the Vermont border. The assembly shown in the photo faces west to eastbound traffic on New York Route 149.  Note that US Route 4 is signed north-south in the state of New York, as shown here, and that's a logical way to do it.  New York Route 149 turns right at the junction in the photo, to join US Route 4 south for a short concurrency.  This photo was taken in October 2015, as part of my trip to the Northeast.
Back to the nationwide main page.
Back to the home page.