PAUL ACROSS AMERICA
US Route 7 runs north-south across the full extent of western New England.  From northwestern Vermont through the Berkshires to southwestern Connecticut, US Route 7 sits just east of mainland New York's entire eastern border.  The northern end is an interchange with Interstate 89, allowing traffic on US Route 7 to merge with the same Canadian border crossing as the Interstate. The crossing leads to Quebec Highway 133, which soon will reach the southern end of Autoroute 35, a freeway moving toward Montreal.  US Route 7 heads south through Burlington, Middlebury, and Rutland in western Vermont.  In Massachusetts, US Route 7 hugs the western edge of the state, passing through Pittsfield and other locales in the Berkshires.  The highway continues southerly through western Connecticut, passing through Danbury before ending in the southwestern corner of the state. An interchange with Interstate 95 at Norwalk, Connecticut, serves at the southern terminus. 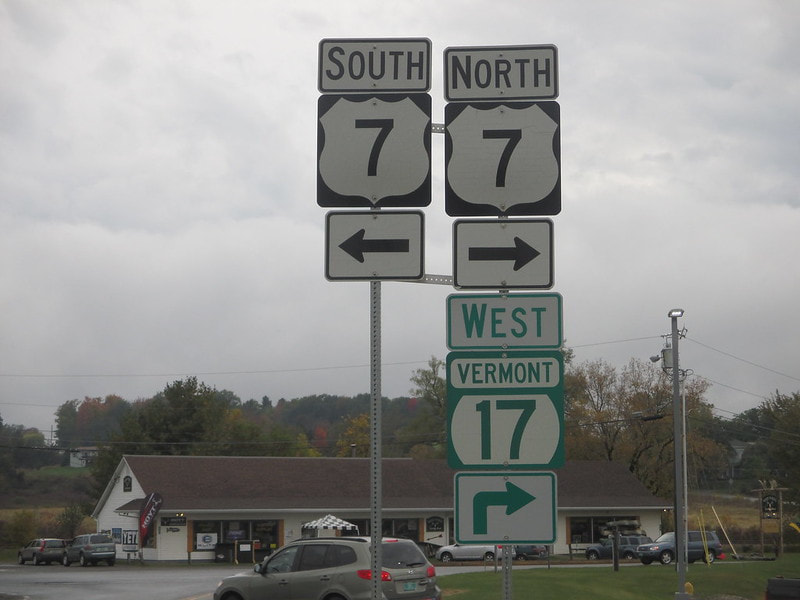 My photo of US Route 7 comes from western Vermont, at a small town called New Haven (no, not the New Haven in Connecticut).  The sign assembly depicted faces east on Vermont Route 17, communicating to traffic heading west as they first encounter US Route 7.  Vermont Route 17 joins US Route 7 north for just a few hundred feet before turning westerly again.  The photo, like most of my photos taken in New England, was taken during my tour of the Northeastern States in October 2015.
Back to the nationwide main page.
Back to the home page.