PAUL ACROSS AMERICA
US Route 15 runs north-south in the eastern United States.  The northern end is at Interstate 86 near Corning, New York, and the southern end is at Interstate 95 in Walterboro, South Carolina.  The route once extended farther north to the Rochester area in New York, but the route has been supplanted by Interstate 390.  Today, US Route 15 begins near the center of the straight east-west border doing most of the separation between New York and Pennsylvania, and just north of it.  From that northern endpoint, US Route 15 heads south to Williamsport, where it begins to follow the Susquehanna River Valley until reaching Harrisburg.  There, it diverts south-southwesterly through Gettysburg, Pennsylvania, and Frederick, Maryland.  US Route 15 cuts down the middle of Virginia and into North Carolina, hitting no major cities until Durham, North Carolina.  In South Carolina, US Route 15 initially goes southwesterly, but straightens out near its junction with Interstate 20, to head south into Sumter.  After Sumter, US Route 15 hugs the Interstate 95 corridor until Interstate 95 cuts it off at Walterboro, South Carolina. 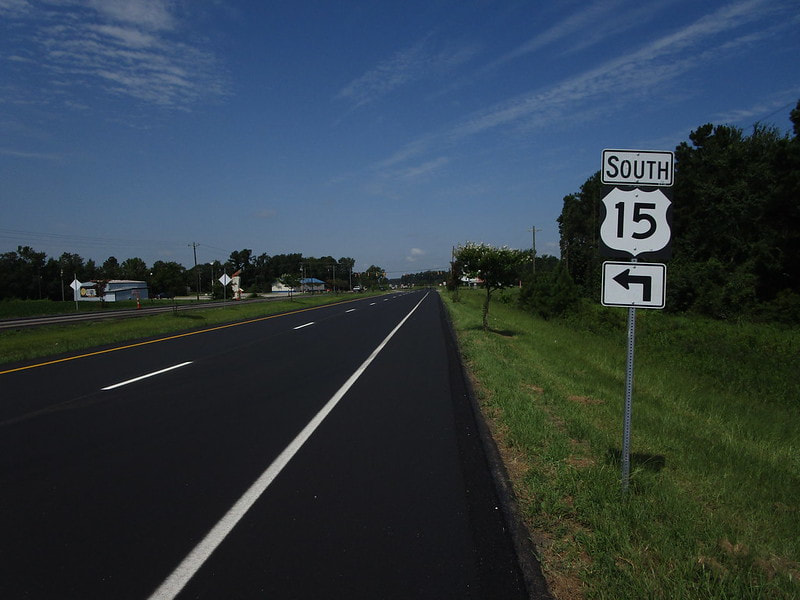 My photo of US Route 15 comes from Santee, South Carolina, the northern extent of US Route 15's section that hugs the Interstate 95 corridor.  The photo looks westward down US Route 301, which US Route 15 uses to transfer from a concurrency with Interstate 95 to a new independent surface road.  Downtown Santee lies just to the north, accessed by a right turn at the intersection in the photo's background.  The sign assembly faces east, telling westbound traffic how to stay on US Route 15's southbound journey. I took this photo as part of the South Carolina detour from my Wilmington, North Carolina trip, in July 2019.
Back to the nationwide main page.
Back to the home page.