PAUL ACROSS AMERICA
US Route 24 is an east-west route with a slight northeast-southwest diagonal, leading through central Colorado, Kansas, Missouri, Illinois, and Indiana, with the eastern end curling northward into northwestern Ohio and southeastern Michigan.  The western end in Colorado curls northward a bit too, through Leadville to end at Interstate 70 and US Route 6 near Vail.  From that western end, US Route 24 heads south through Leadville, and east through Colorado Springs to join Interstate 70 east into Kansas.  Near Colby, Kansas, US Route 24 splits from Interstate 70 to connect with the next row of Kansas counties north of the row traversed by the Interstate.  US Route 24 eventually joins the Interstate 70 corridor again, though, from Lawrence to Kansas City.  In Missouri, US Route 24 starts gradually gaining latitude as it heads east-northeast from Kansas City to it Mississippi River crossing into Quincy, Illinois.  The east-northeasterly angle continues until Peoria, Illinois, where the route straightens out to proceed due east across eastern Illinois and much of northern Indiana.  In Huntington, Indiana, however, US Route 24 makes a sudden turn to the northwest, so it can reach Fort Wayne, Indiana, and Toledo, Ohio.  (At Huntington, US Route 224 takes over as the highway continuing eastward.) US Route 24 continues beyond Toledo in a northward direction, flanking Interstate 75 and the west shore of Lake Erie to the west.  It continues north into the Detroit area, following the north-south Telegraph Road before ending at an interchange with Interstate 75 near Pontiac, Michigan. 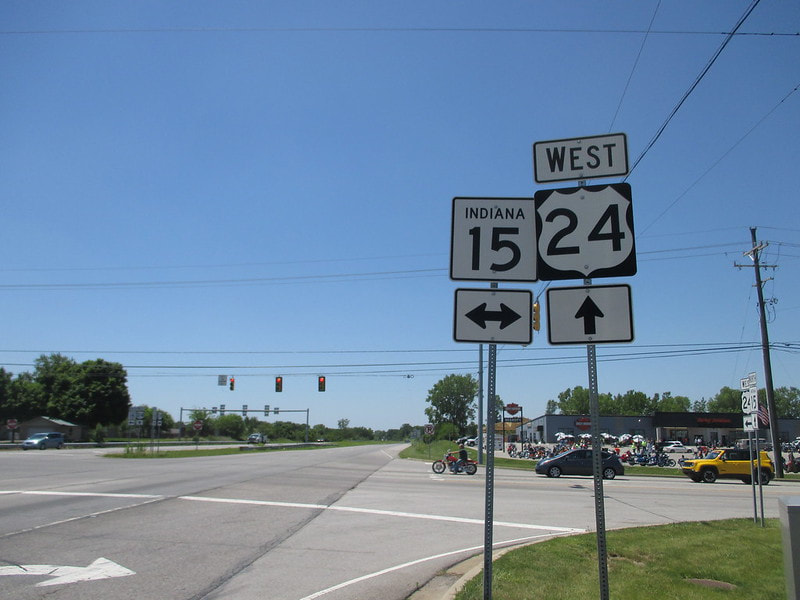 My US Route 24 photo comes from Wabash, Indiana, at the junction with Indiana State Route 15.  The photo shows a pair of guide markers erected for westbound travelers on US Route 24, sitting at the northeast corner of the intersection.  This shot comes from a trip across Indiana, photographing the state's route markers for my state-level collection.  It was taken in June 2016.  Wabash is a town, predictably on the Wabash River, in north-central Indiana.  US Route 24 is a nice, smooth-running four-lane highway from Logansport, Indiana, to Toledo, Ohio.
Back to the nationwide main page.
Back to the home page.