PAUL ACROSS AMERICA
US Route 57 runs east-west in south Texas, linking Interstate 35 to the northern end of Mexico's National Highway 57.  US Route 57 was not numbered by any American convention; rather it was named (numbered) after the adjoining Mexican highway, which runs all the way to Mexico City! Piedras Negas, Mexico, and Eagle Pass, Texas, mark either end of the border crossing that serves as US Route 57's western terminus.  The eastern terminus is at Interstate 35 near Pearsall, Texas, about 40 miles southwest of San Antonio.  Though US Route 57 in the United States runs mainly east-west, it is signed north-south in accordance with the overall north-south alignment traversed by the international stretch of roadway labeled "57".  The ground covered by US Route 57 is rural, passing through only a couple of small towns. 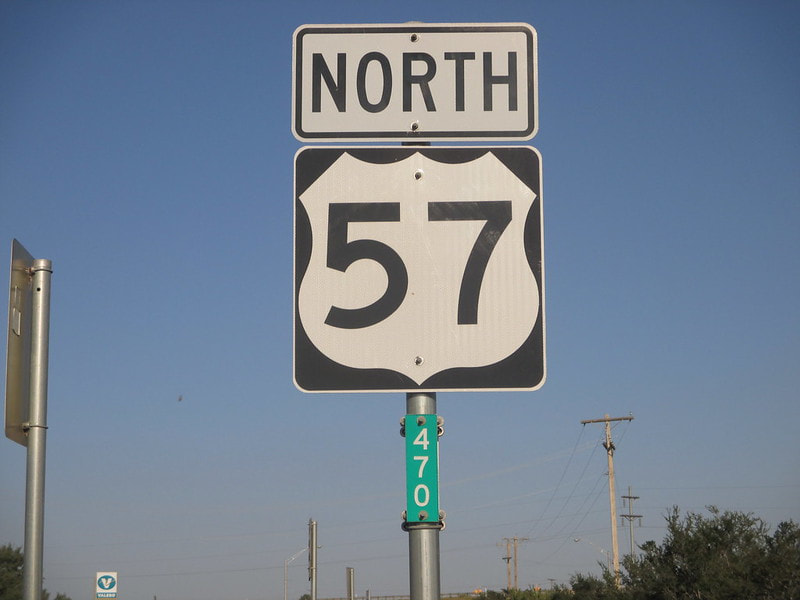 My photo for US Route 57 is the last eastbound trailblazer (though it says "north") before reaching the eastern end at Interstate 35. The signage depicted faces west. This photo marked the western extent of my massive detour west into Texas, the second leg of the first Gulf Coast trip of October, 2014. Since it was so late in the day, I really wanted a sign that faced west toward the setting sun (backlit photos turn out poorly).  This was the last photo taken before retiring for the night in Pearsall, Texas, just to the south.  I'll always remember walking around that town to stretch my legs at the end of a long day of driving, to find chickens roaming the streets.
Back to the nationwide main page.
Back to the home page.