US Route 77 barely exists in Iowa, but it does, since its northern end is in Sioux City.  A north-south bridge brings US Route 77 out of South Sioux City, Nebraska, across the Missouri River into Iowa.  But US Route 77 barely makes it any farther than the northern approach to the bridge, as an east-west bend in Interstate 29 abruptly cuts the route off from progressing any further.  Interstate 29 is flanking the south side of downtown Sioux City, Iowa at this point.  All of US Route 77's distance in Iowa, amounting to a fraction of a mile, is concurrent with a Business alignment of US Route 20, which turns easterly into downtown Sioux City just north of this. 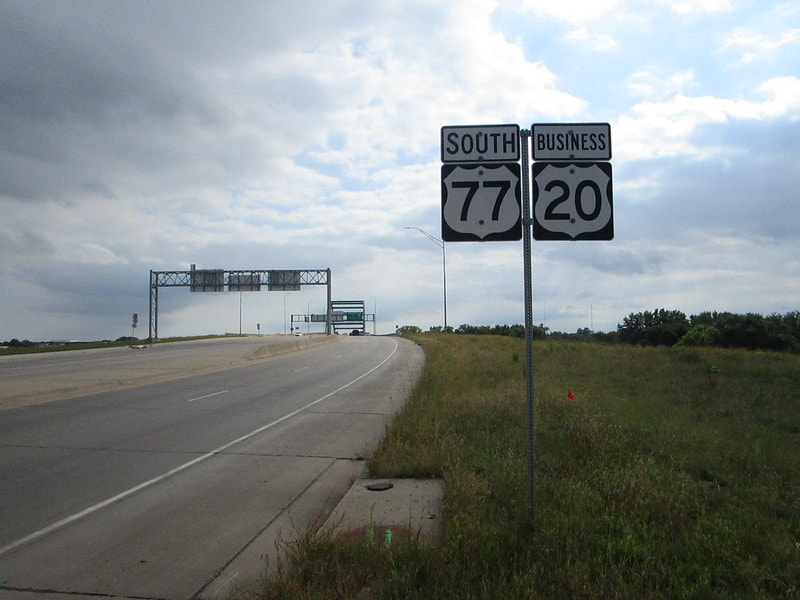 My photo of US Route 77 from Iowa has to come from one exact spot, as US Route 77's time in Iowa is so very short. The signage depicted shows the first southbound reassurance marker along US Route 77, facing travelers who are departing from the interchange with Interstate 29. Not only is this the first southbound trailblazer on Iowa's section of US Route 77; it's the northernmost trailblazer for US Route 77 in general. Note the companionship with Business US Route 20. This photo was taken in September 2019 as part of my northern Iowa trip.
Back to the Iowa main page.
Back to the home page.