US Route 151 is a northeast-southwest highway through Iowa and Wisconsin, but in Iowa, it runs from the Amana area through Cedar Rapids to Dubuque. The southern end, actually, is a bit south of Amana, at Interstate 80.  This endpoint is a rural diamond interchange west of Iowa City.  From there, US Route 151 gets started by passing through the Amana colonies and bending northeasterly into the Cedar Rapids area.  A business alignment of US Route 151 heads through the heart of Cedar Rapids, but the main alignment has been rerouted as a bypass around the southern and eastern sides of the city.  The eastbound part of the bypass, along the south side, follows the US Route 30 freeway, and the northbound portion around the east side of town follows Iowa Route 13. Then, at Marion, US Route 151 converges into a single route and leaves the area toward the northeast.  US Route 151 passes through Anamosa, Monticello, and Cascade, before joining US Route 61 north into Dubuque. US Routes 151 and 61 stay together to cross the Mississippi River out of Dubuque into the very southwestern corner of Wisconsin. 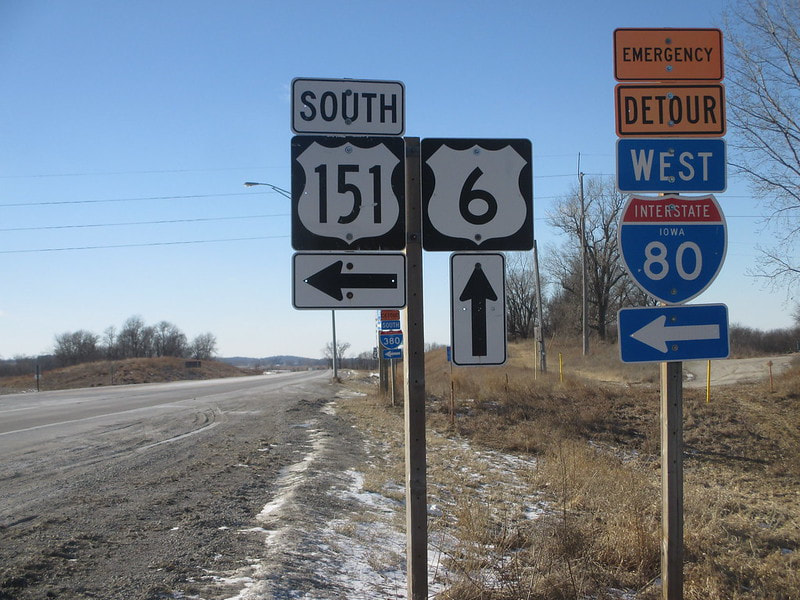 My photo of US Route 151 signage comes from its interaction with US Route 6, very near its southern end.  US Route 151 has a short jog to the east along US Route 6 as it's trying to make its way northward.  This photo was taken at the west end of that jog along US Route 6; the signage depicted faces east for westbound travelers reaching the conclusion of the concurrency. This photo was taken in February 2016 as I was making my way to Omaha down Interstate 80, which is just to the south of this photo's place of origin.
Back to the Iowa main page.
Back to the home page.