PAUL ACROSS AMERICA
US Route 3 is the backbone of New Hampshire, continuing south through parts of Massachusetts, to end in the inner portions of the Boston area. US Route 3 once continued south to Cape Cod, but that section from Boston to Cape Cod is now Massachusetts State Highway 3.  The northern end of US Route 3 occurs at the only border crossing from New Hampshire into Canada, at the northern tip of the U.S. state.  Pittsburg is the northernmost town traversed by US Route 3, and from the northern part of the state, US Route 3 heads south, joining Interstate 93 south near Franconia and the site of the Old Man of the Mountain.  For the rest of its life, US Route 3 stays near Interstate 93, and the two routes share a corridor south through Concord to Manchester (US Route 3 is the surface road alternative).  At Manchester, US Route 3 forms a separate freeway from Interstate 93, staying west of the Interstate. At Burlington, Mass., US Route 3 joins Interstate 95 northeast for a short spell, diverting onto a surface road bound for Cambridge, Massachusetts.  US Route 3 ends at a bridge in Cambridge, just across the Charles River from Boston.  US Route 20 lies just to the south, across the bridge. 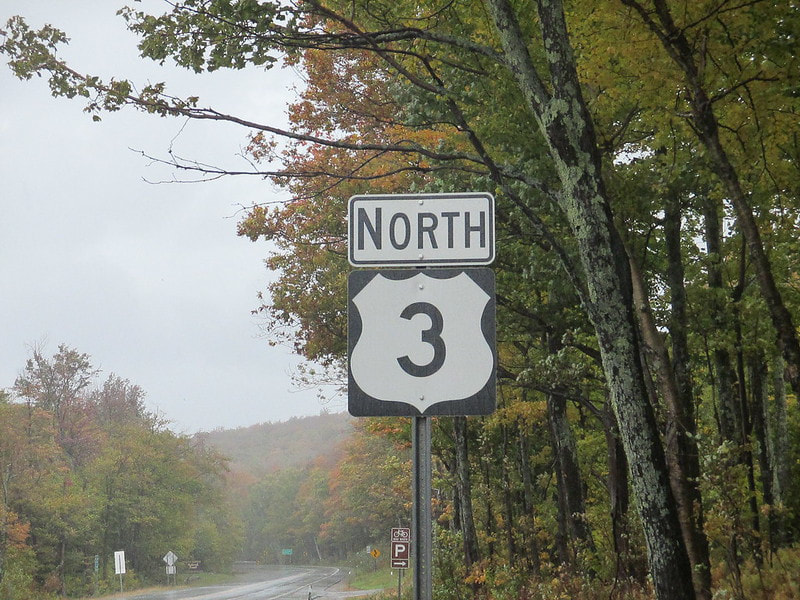 My photo for US Route 3 is a northbound trailblazer, notifying traffic that they have chosen to stay on US Route 3 instead of Interstate 93.  This is at the northernmost split between the two routes near Franconia, where US Route 3 does its own thing for the rest of the way from here to Canada.  This is probably the wettest sign I've ever had to photograph.  This rainy day in October 2015 was part of my trip to the Northeastern States. A short detour south from Littleton led me to this sign and to the Old Man of the Mountain site, something I found amusingly pointless, as the original rock face shaped like a man's face collapsed in the early 2010s.
Back to the nationwide main page.
Back to the home page.