PAUL ACROSS AMERICA
US Route 26 is a route through northwestern and central Oregon, Idaho's Snake River Valley, northwestern and central Wyoming, and western Nebraska.  The western end is at US Route 101 near the Pacific coastline, at a point situated between Seaside and Cannon Beach (those town names certainly sound like coastal town names, don't they?).  This is in northwestern Oregon, south of Astoria, where US Route 30 has its western terminus.  US Route 26, like US Route 30, heads east from the coast to play a role in Portland's highway layout.  But past the Portland area, US Route 26 dives southward away from the Columbia River, into the mountains, passing by Mount Hood, the highest point in Oregon.  US Route 26 continues southeast and easterly across mid-northern Oregon (a bit north of Oregon's middle), converging with US Routes 20 and 30 near Ontario, Oregon, at the state's eastern border.  It is here that US Route 26 crosses into Idaho, serving as a surface highway through downtown Boise and the surrounding metroplex.  But soon after that, US Route 26 joins right back with US Routes 20 and 30, plus Interstate 84. Near Bliss, Idaho, in the middle of the state, US Route 26 splits away as a surface road running north of Interstate 84, passing by Craters of the Moon National Monument.  US Route 26 then passes through Blackfoot and Idaho Falls to cross into Wyoming, where it joins US Route 89 north through Jackson and Grand Teton National Park.  In the national park, US Route 26 splits easterly across central Wyoming.  At Casper, it joins Interstate 25 south for a while, and then it splits southeastward into western Nebraska.  The eastern end of US Route 26 is at Interstate 80, just south of US Route 30, in Ogallala, Nebraska. 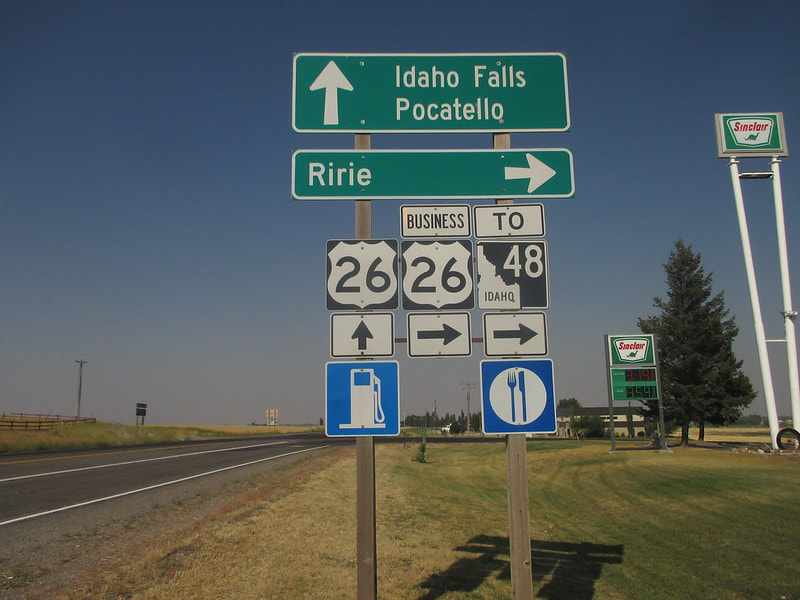 My photo for US Route 26 comes from a tiny town in eastern Idaho, named Ririe.  This signage faces east along US Route 26, at the southern end of Idaho State Route 48. This photo was taken during a pit stop at the gas station whose signage is visible in the frame. That pit stop occurred along the eastward return trip of our big excursion to the Pacific Ocean and back, in August 2018.  I used this piece of US Route 26 for the leg of our trip extending from the Columbia River Gorge to Grand Teton National Park.
Back to the nationwide main page.
Back to the home page.