PAUL ACROSS AMERICA
US Route 58 runs across southern Virginia, spanning the width of the state's widest extent and having more mileage than any other route in that state.  Though US Route 58 is remarkable to Virginia, it is remarkable to no other states.  The western extent of US Route 58 barely pokes south into Tennessee near Virginia's very southwestern corner; the endpoint is at a trumpet interchange with US Route 25E in Cumberland Gap, Tennessee, less than a mile from Virginia.  US Route 58 heads east from there across all of Virginia to end at US Route 60 in Virginia Beach, near that route's eastern terminus.  That eastern endpoint is a block or two from the Atlantic Ocean. Between its two endpoints, US Route 58 is a major highway through places in Virginia such as Martinsville, Danville, South Hill, Portsmouth, and Norfolk.  In western Virginia, US Route 58 has an alternate alignment between Duffield and Abingdon, providing access to towns farther north such as Norton and St. Paul, Virginia.  US Route 58 lies south of US Route 60, making it a slight violation of the numbering convention.  All the other even numbers in the sixties were taken, though, and Interstate 64 is close by, to boot. 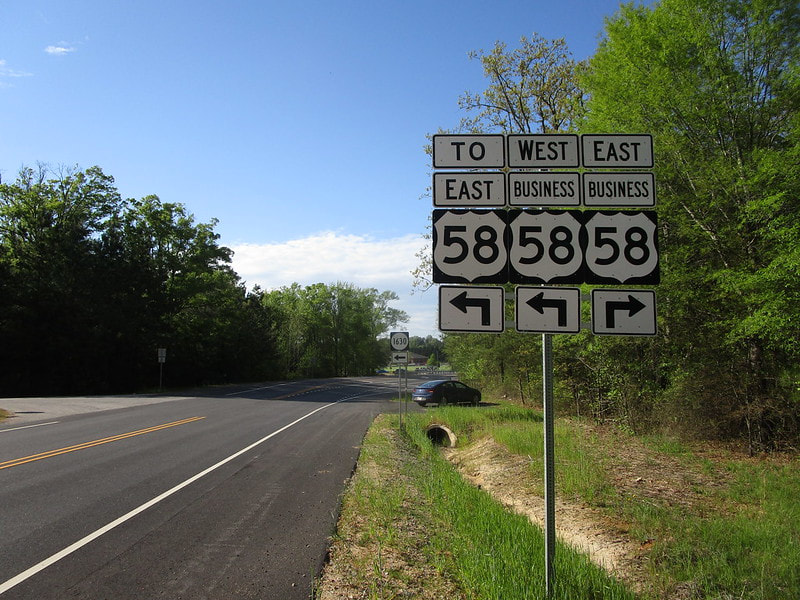 My photo for US Route 58 comes from the northern end of US Route 311 on the west side of Danville, Virginia.  The intersection home to US Route 311's northern end, hidden in the background of this photo, sits at the business alignment of US Route 58 for servicing Danville, Virginia. Specifically, it's very near the western end of that business alignment of US Route 58, where it rejoins the freeway bypass constructed for US Route 58 around the south side of town.  The sign assembly depicted faces south, communicating options to those who reach the end of US Route 311.  This photo was taken in April 2021 as part of the Virginia trip.
Back to the nationwide main page.
Back to the home page.