In Indiana, Interstate 64 runs east-west across the western half of its southern extent.  The overall intent in constructing Interstate 64 in this region was to provide a direct connection from Saint Louis, Missouri, to Louisville, Kentucky.  Louisville sits right across the river from the center of Indiana's southern border with Kentucky, and from there, Interstate 64 heads west across southern Indiana, skirting the northern outskirts of the Evansville area, and across the Wabash River into Illinois toward the St. Louis area.  Exits will be listed on this page, from west to east, to follow with the national numbering convention.

To start things off, Interstate 64 crosses into Illinois via a bridge over the Wabash River near Grayville, Illinois: 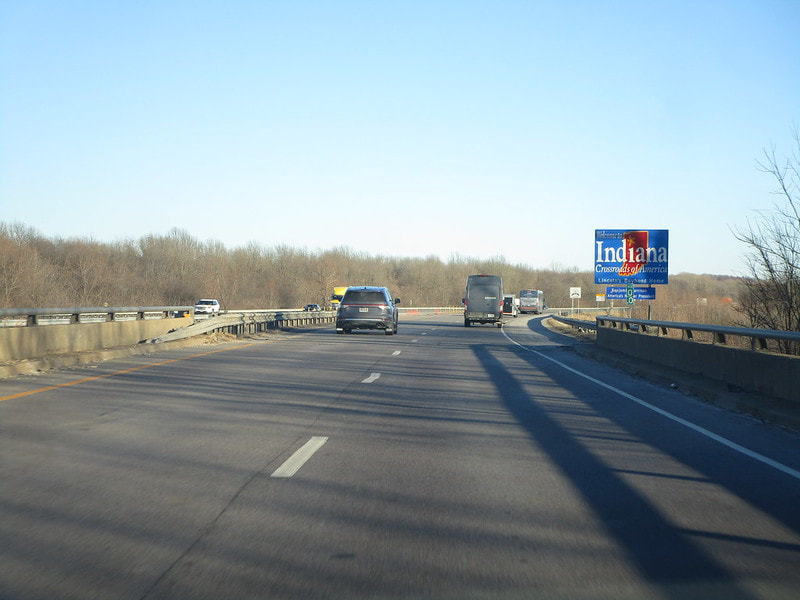 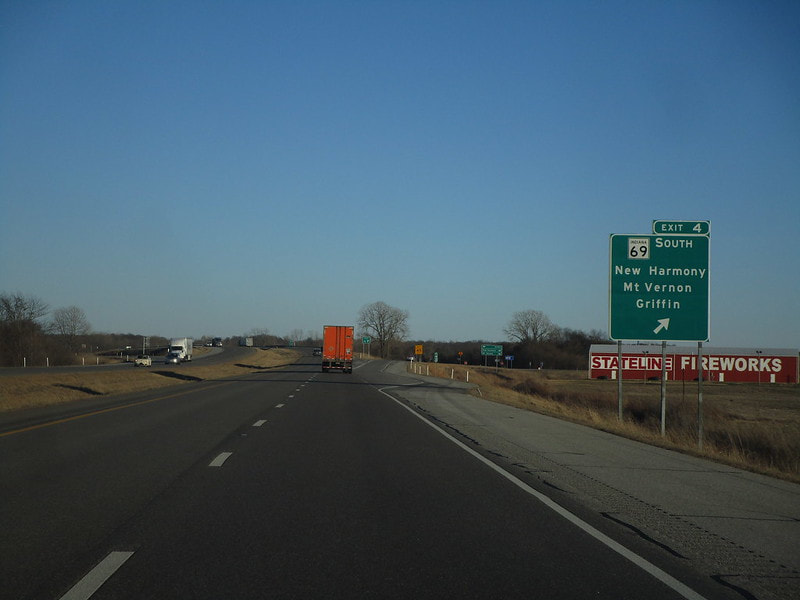 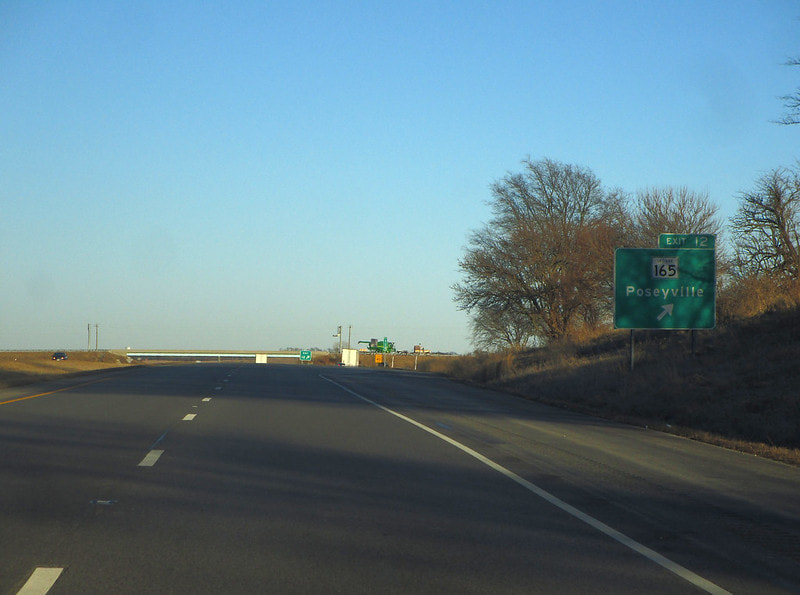 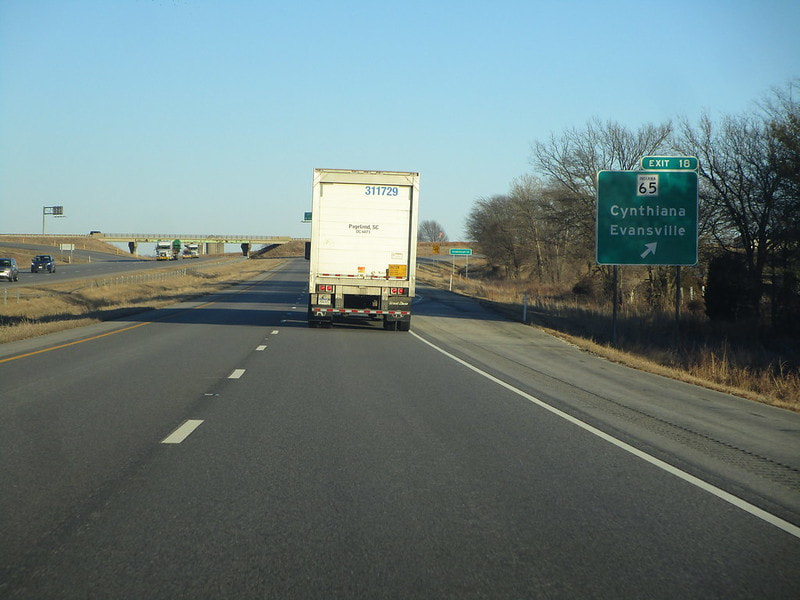 Exit 25A is the first of a pair of interchange ramps at a cloverleaf to US Route 41; this first exit leads to US Route 41 south, toward Evansville: 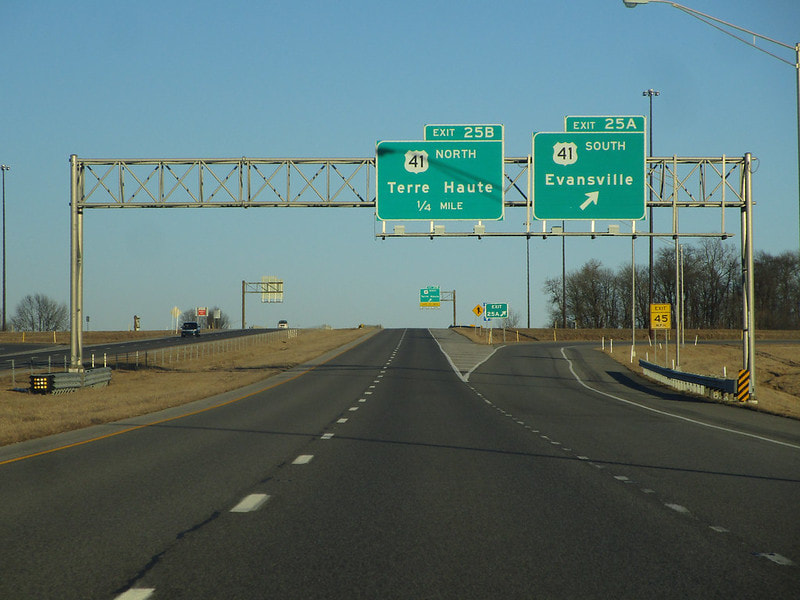 Exit 25B, the latter of the cloverleaf ramps, leads to US Route 41 north toward Terre Haute: 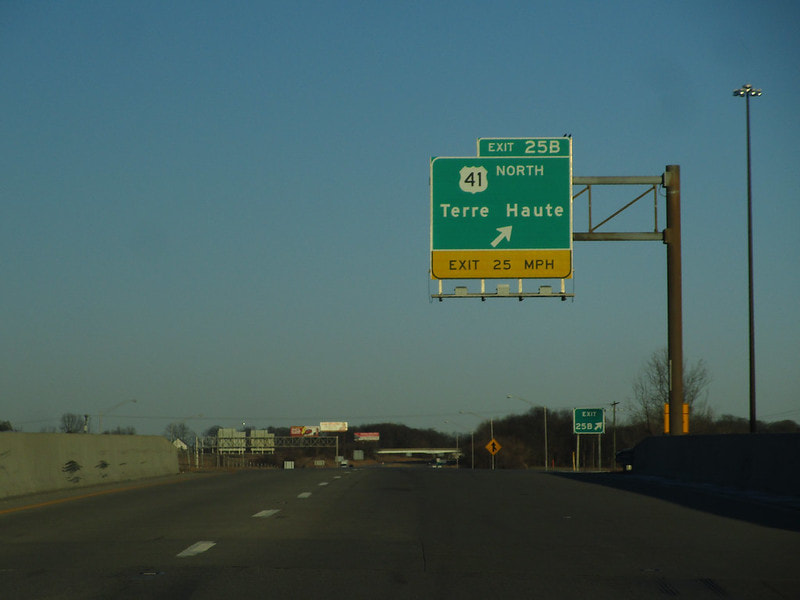 Exit 29A is the first ramp of another cloverleaf, with this ramp leading to Interstate 69 and Indiana Route 57 south, toward Evansville and Henderson, Kentucky: 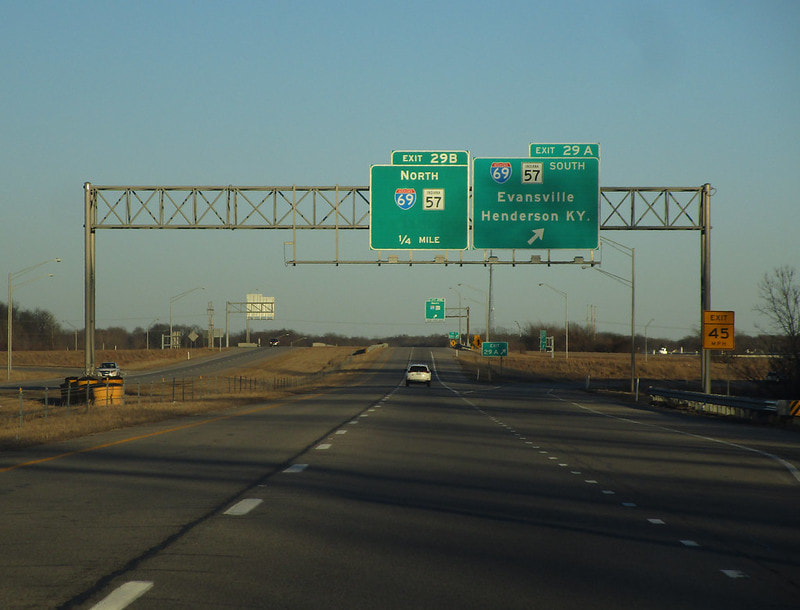 Exit 29B, the latter ramp of the cloverleaf, leads to Interstate 69 and Indiana Route 57 north, but no control cities are shown on the sign; I think the sign will eventually say "Indianapolis" once Interstate 69 is completed between Indianapolis and Martinsville: 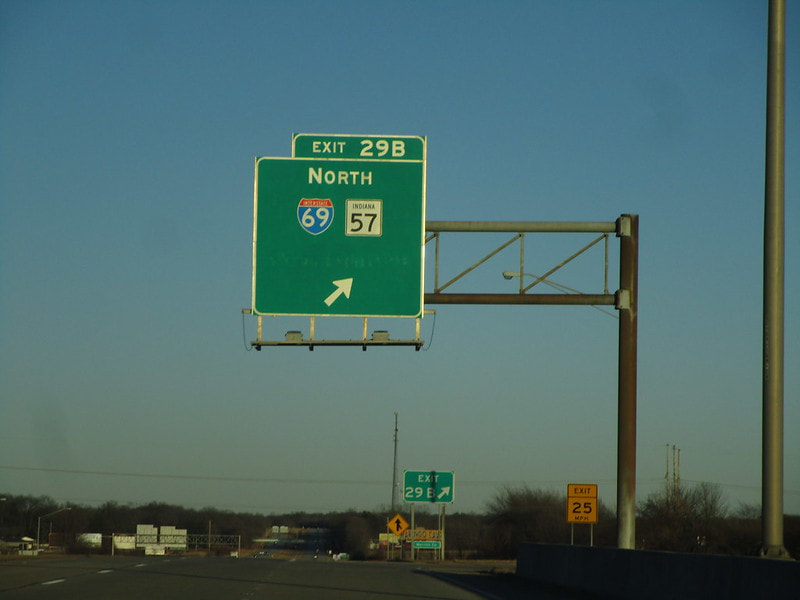 Exit 39 is for Indiana Route 61, connecting to Lynnville and Boonville: 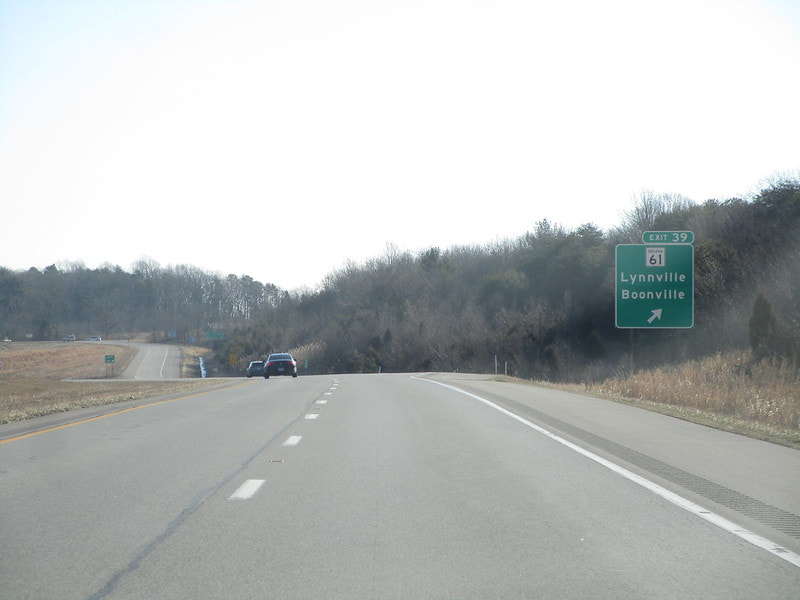 Exit 54, fifteen miles later, is for Indiana Route 161 with access to Tennyson and Holland: 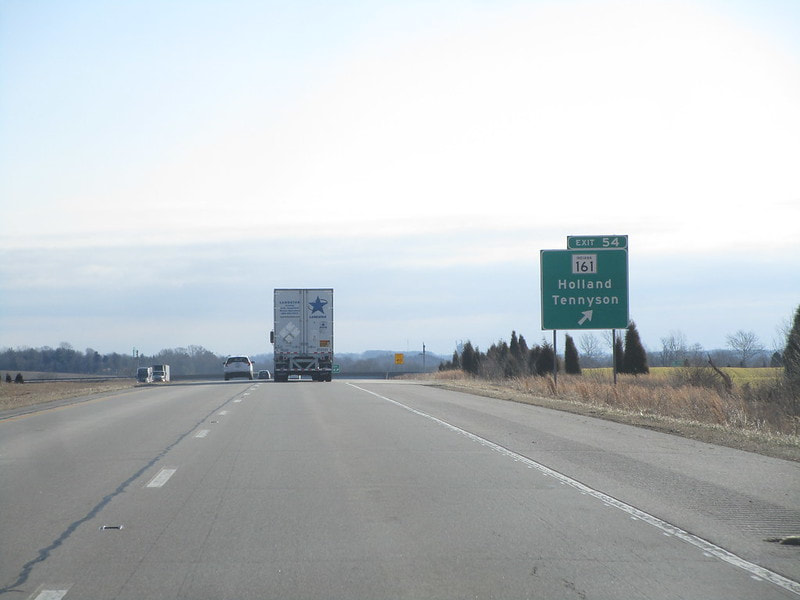 Exit 57A is the first half of a partial cloverleaf interchange, leading to US Route 231 south toward Dale and Owensboro: 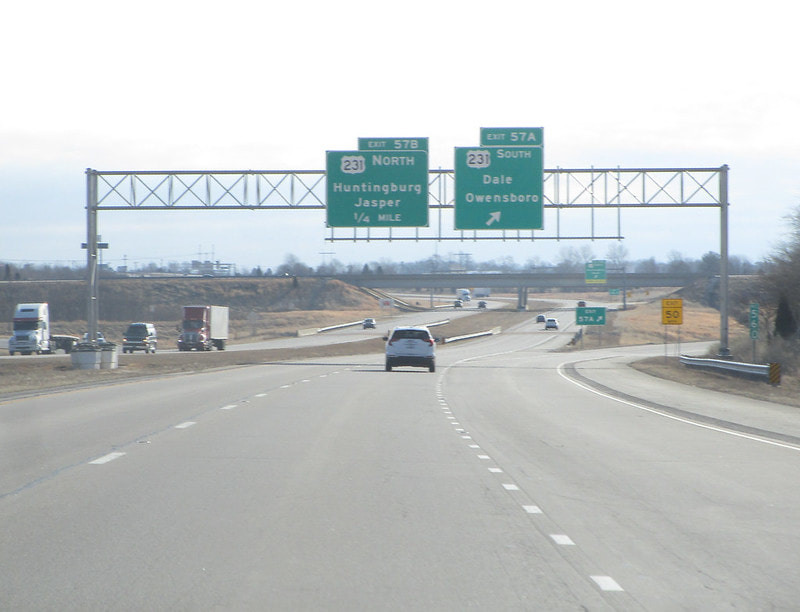 Exit 57B is the latter half of the partial cloverleaf, leading to US Route 231 north toward Huntingburg and Jasper: 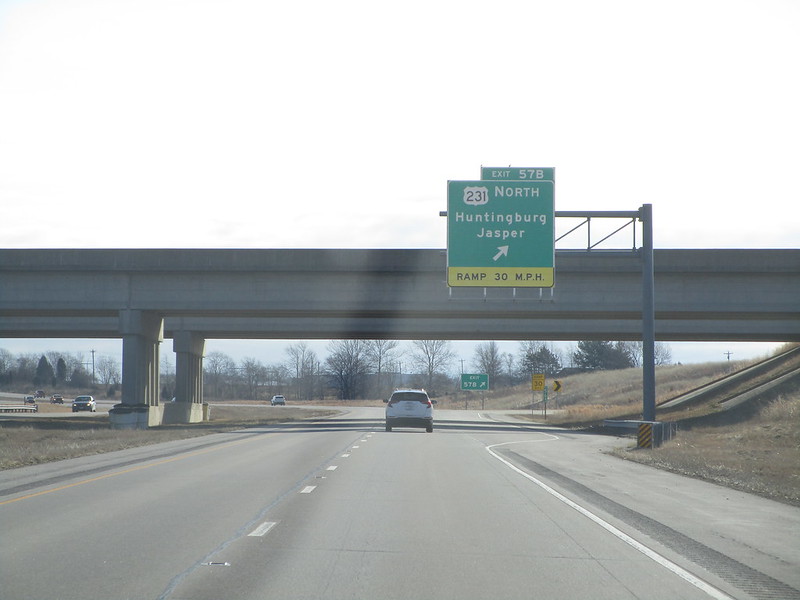 Exit 63 is a typical diamond interchange to Indiana Route 162, with Ferdinand, Jasper, and Santa Claus all listed as control cities: 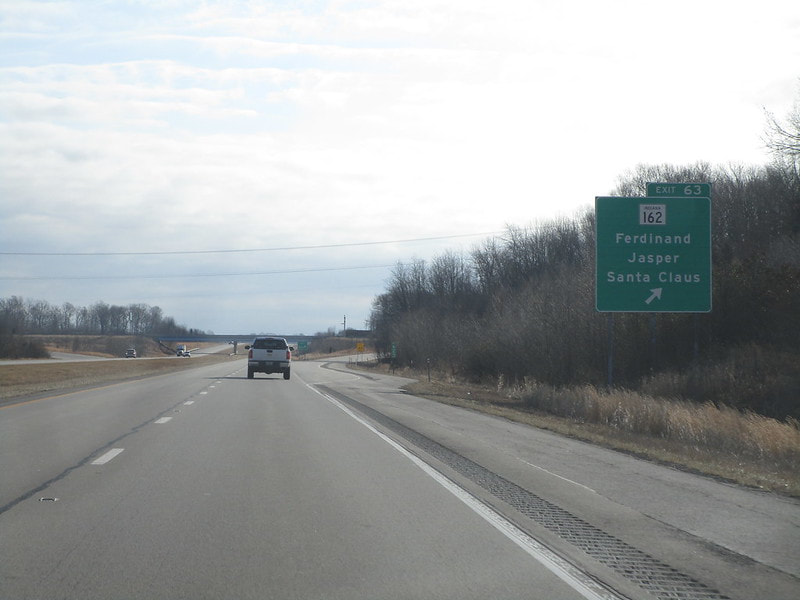 Exit 72 is for Indiana Route 145, which links travelers to Birdseye and Bristow: 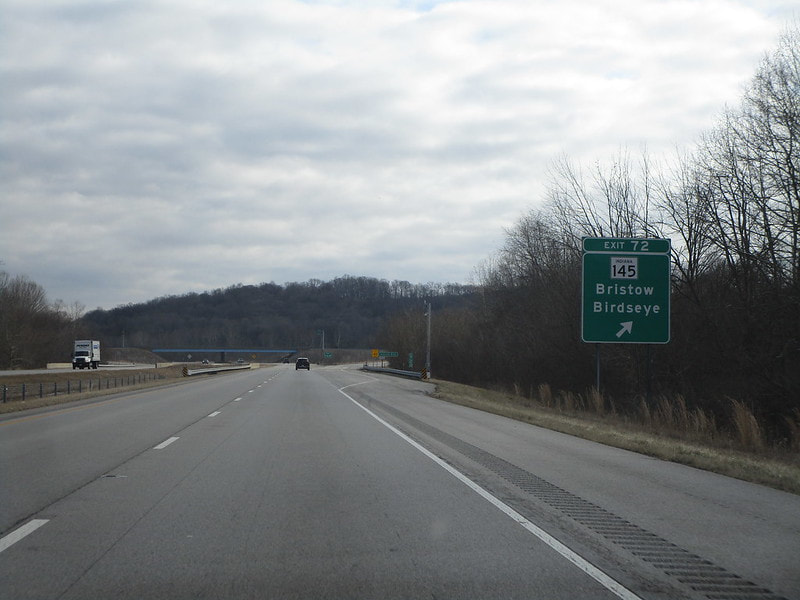 Exit 79 is for Indiana Route 37, providing access to Tell City and French Lick: 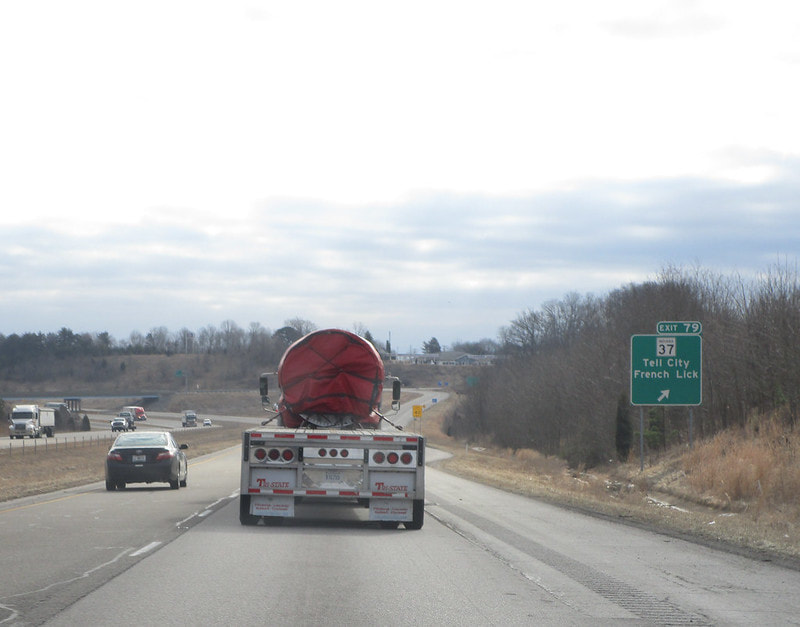 Exit 86 is to the southern extent of Indiana Route 237, with access to English and Sulphur: 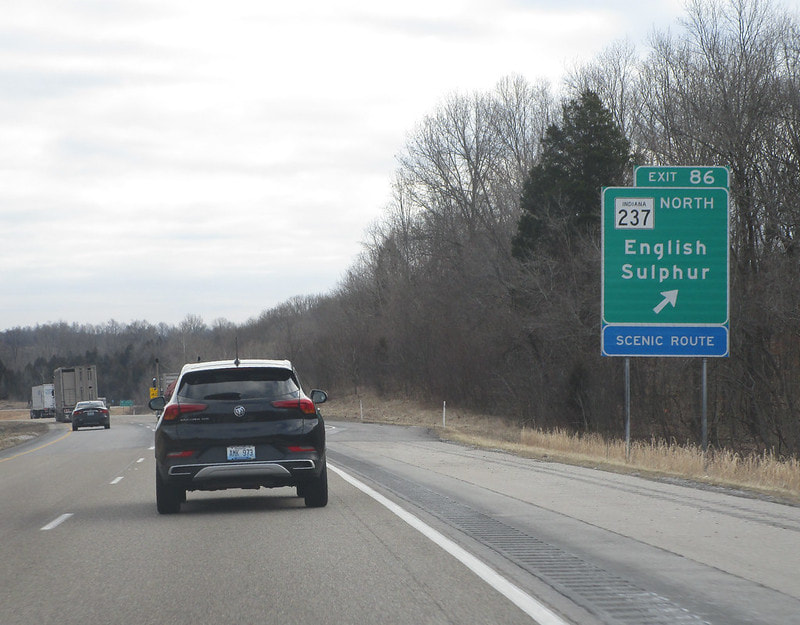 Exit 92 leads to the north-south piece of Indiana Route 66, with Leavenworth and Marengo shown as control cities: 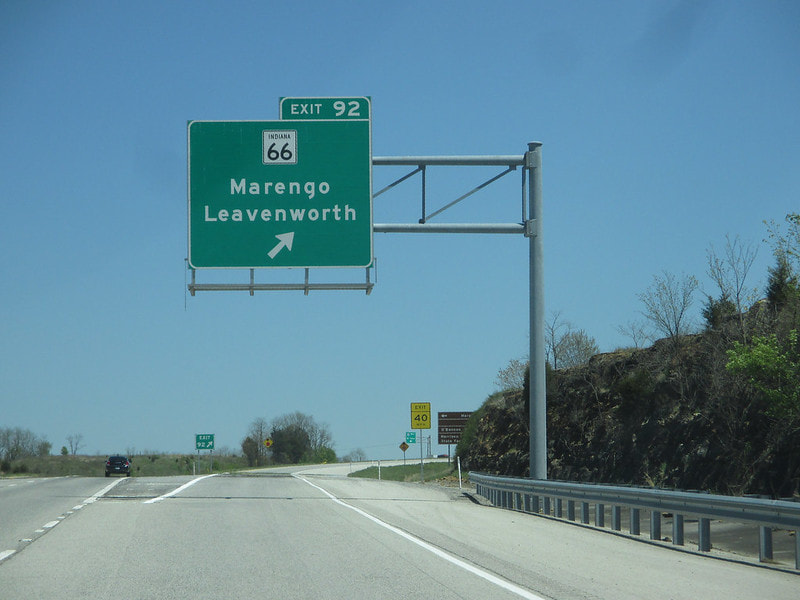 Exit 105 is a fountain interchange for Indiana Route 135, linking to Corydon and Palmyra: 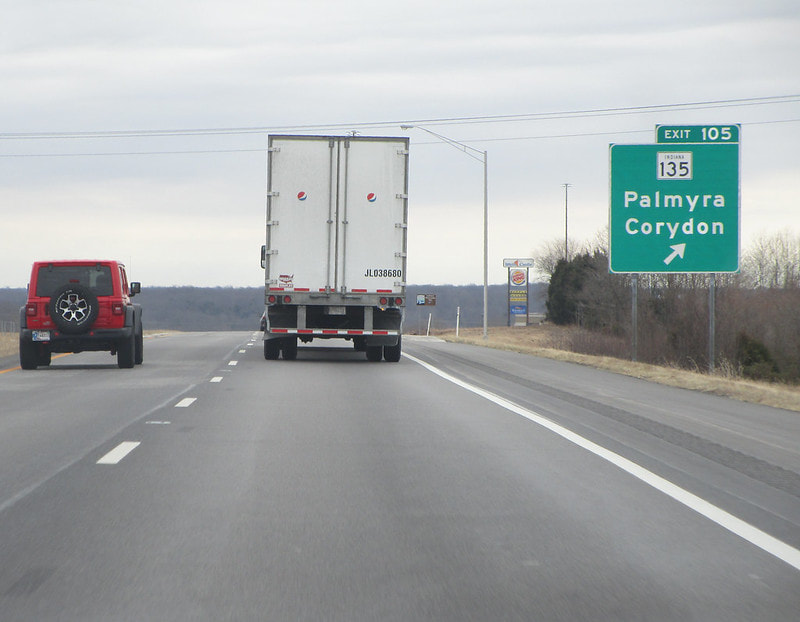 Exit 113 is a basic diamond interchange with access to Lanesville: 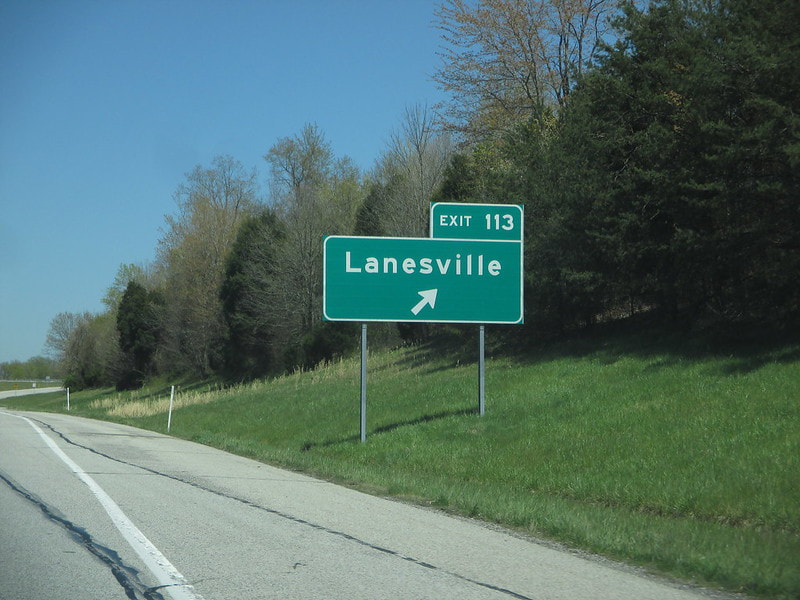 Exit 118 is a diamond interchange to a surface road, where turning one way puts travelers on Indiana Route 64 west toward Georgetown; turning the other way brings travelers to Indiana Route 62, which joins Interstate 64 from the west: 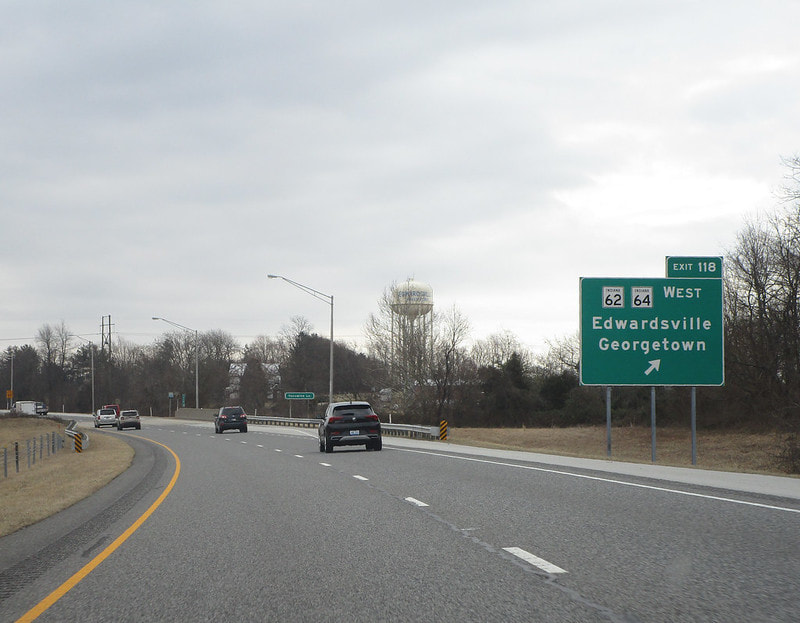 Exit 119 is a trumpet interchange to US Route 150 west toward Greenville; US Route 150 joins Interstate 64 east at this point, forming a triple concurrency (also including Indiana Route 62): 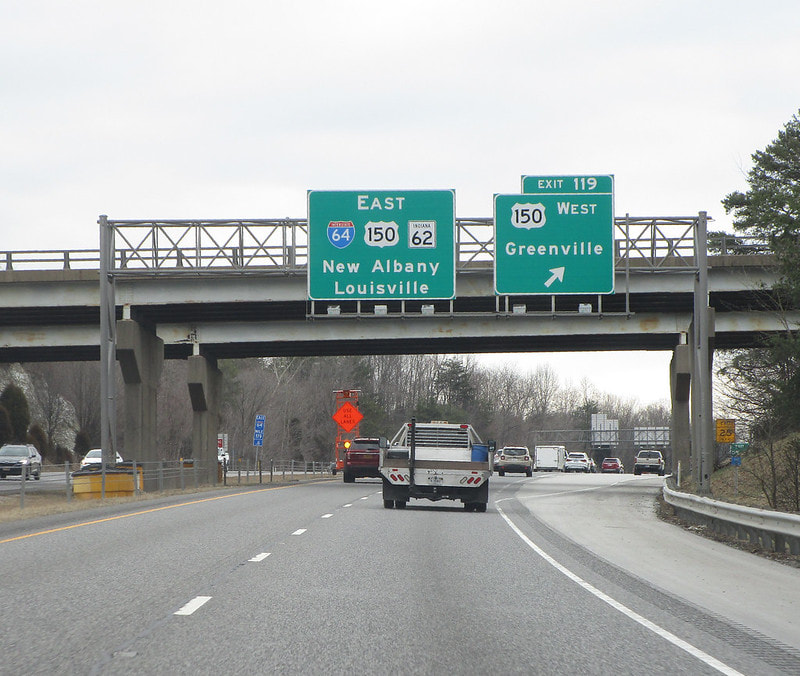 Exit 121 is the western beginning of Interstate 265, whose purpose is to bypass around the north and east sides of Louisville. Interstate 265 immediately grabs Indiana Route 62 and takes it along for the ride; Interstate 65 is shown as a control city on the signs: 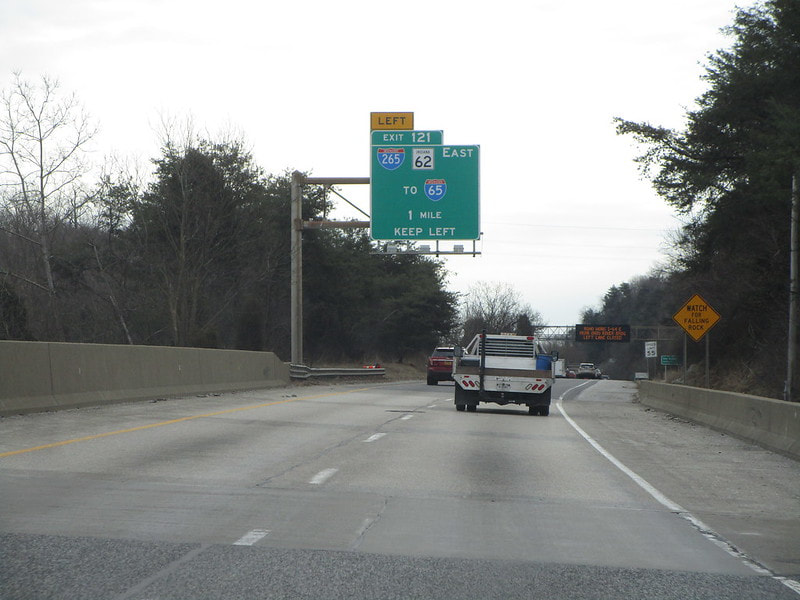 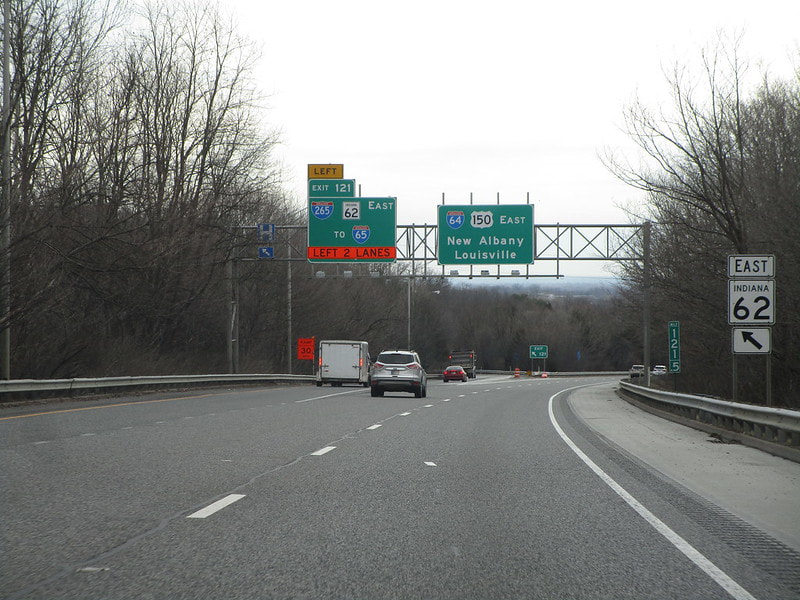 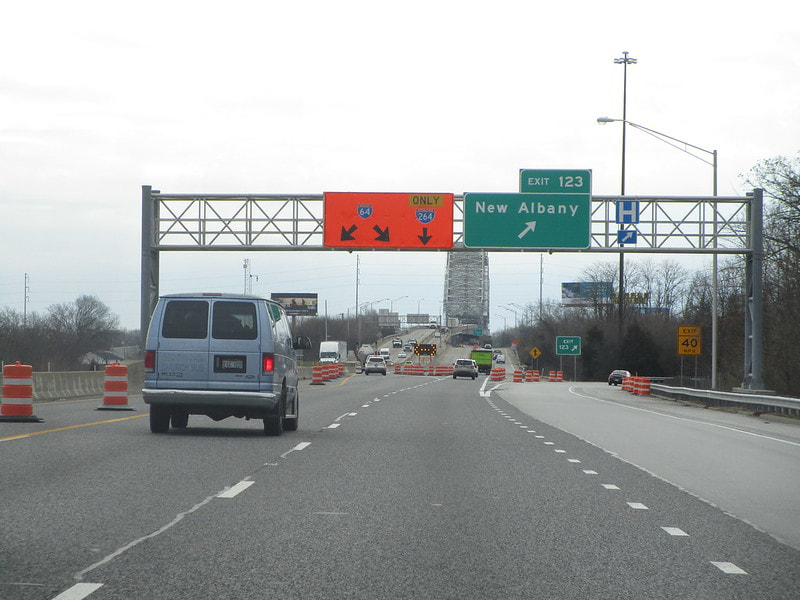 After spending about 124 miles in Indiana, Interstate 64 crosses into Louisville, Kentucky, and eventually continues all the way to the Virginia Beach area, on the Atlantic Ocean!  The crossing over the Ohio River into Kentucky is a two-level bridge, with the eastbound carriageway occupying the lower level and the westbound carriageway occupying the top level.  (The temporary setup in the construction zone shown in the photo doesn't reflect this, though.)
Back to the Indiana main page.
Back to the home page.