Interstate 290 starts and ends at Interstate 90, and actually is a former alignment of Interstate 90 from before the Kennedy Expressway was completed.  The northwestern end is in the Schaumburg area, in the northwest suburbs, and the southeastern end is the Circle Interchange (now the "Jane Byrne Interchange"), one of the busiest interchanges in the country situated right in downtown Chicago.  The east-west portion east of Interstate 290, known as the "Eisenhower Expressway", is more of a spur into downtown Chicago, and looks like an eastern continuation of Interstate 88 on maps.  The Eisenhower Expressway is impossibly busy and nearly impossible to expand beyond its six to eight lanes, prompting most people from the suburbs due west of Chicago to take the train instead of commuting via highway (the BNSF line has by far the most ridership of any Metra line).

Exit numbers along Interstate 290 increase as travelers progress east, since Interstate 290 is overall considered an east-west highway.  Interstate 290 starts by heading south from Interstate 90 in Schaumburg before turning easterly, so the first several listings will increase from north to south.

Interstate 290 begins in the Schaumburg area heading south along a freeway that was already carrying Illinois 53 from points north; the start point is at a cloverleaf interchange with Interstate 90, whose first ramp leads to Interstate 90 west toward Rockford: 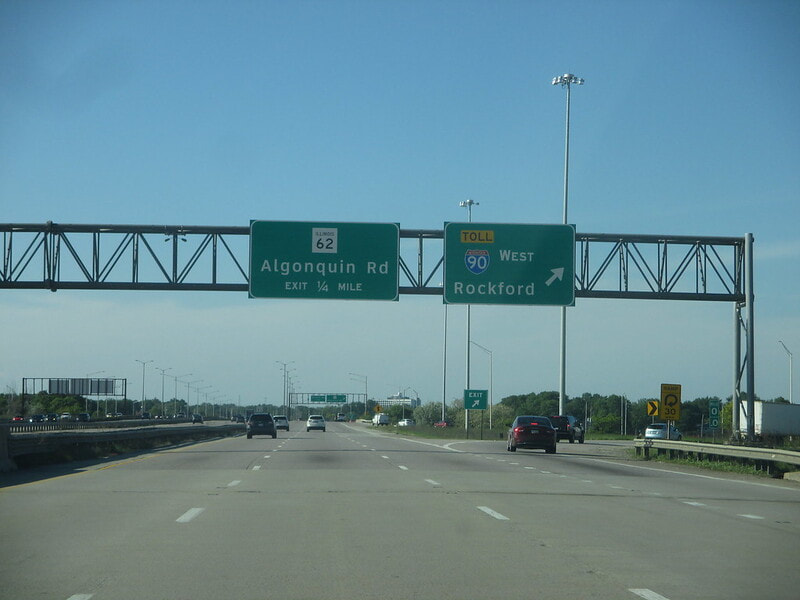 The second ramp at the cloverleaf interchange where Interstate 290 starts leads to Interstate 90 east, toward Chicago: 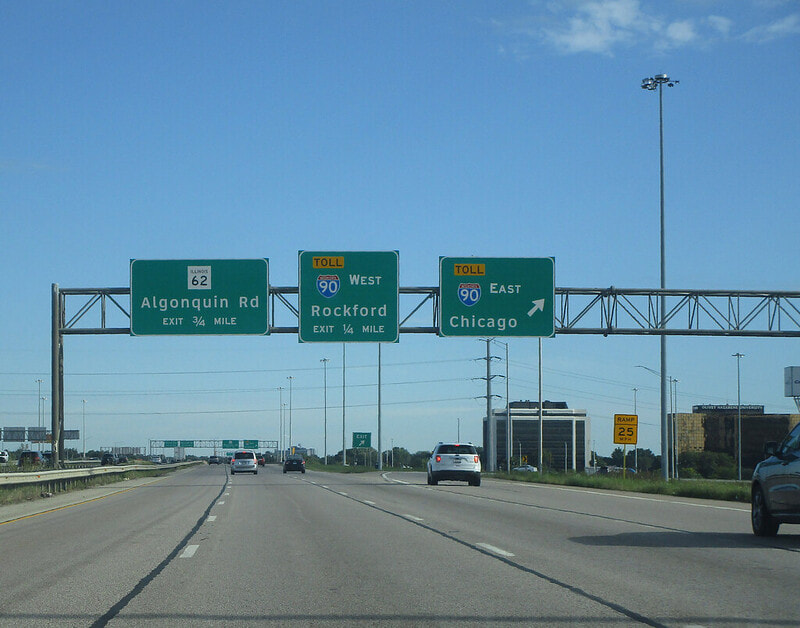 Here's a shot of the northern end marker for Interstate 290, at the Interstate 90 interchange by Schaumburg: 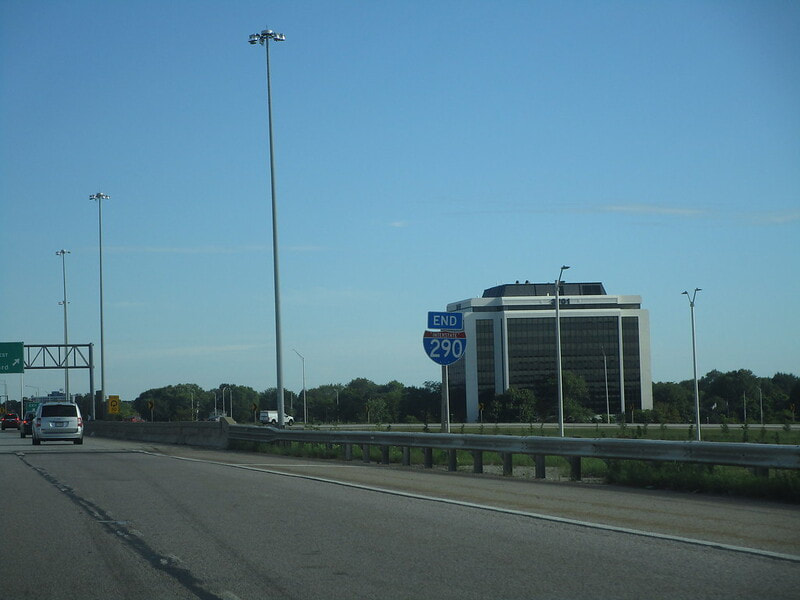 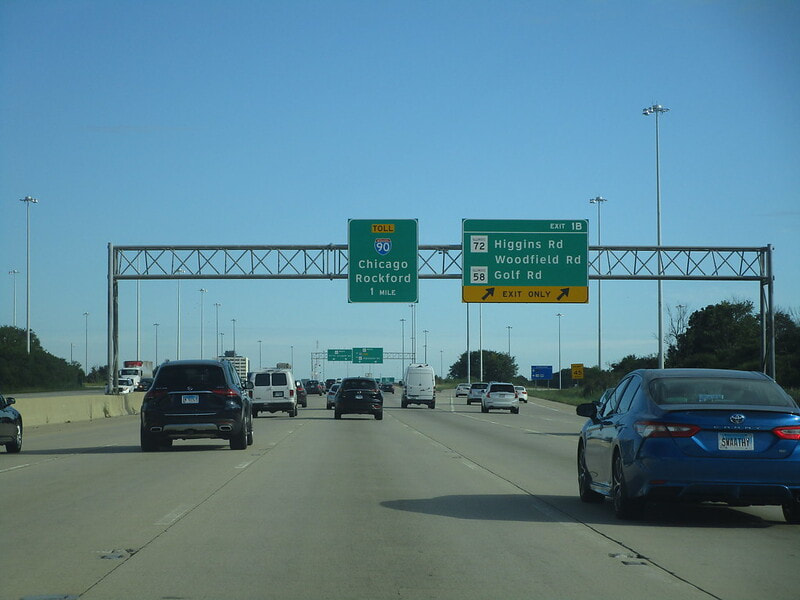 Exit 4 is a half-folded diamond interchange to Biesterfield Road in Elk Grove Village; it is at this interchange that Illinois 53 splits away to continue south as a surface road: 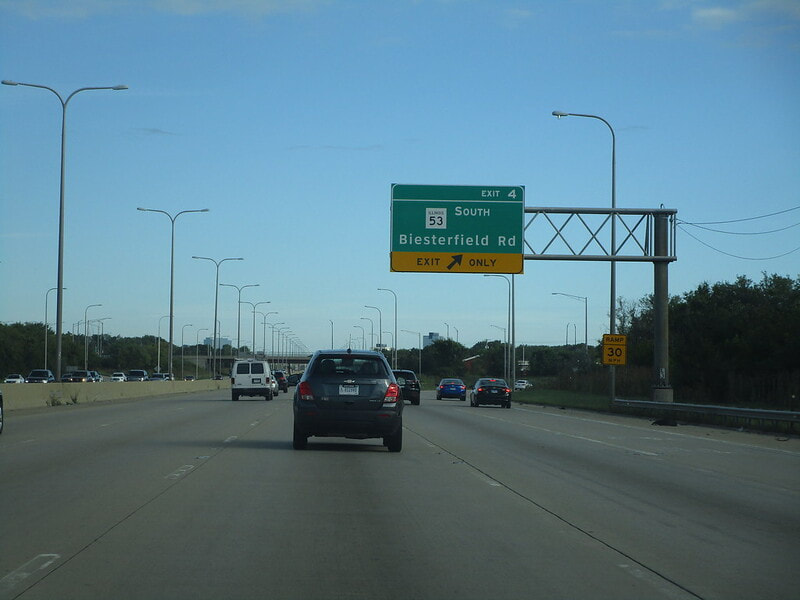 Exit 5 is for Illinois 390, the newly-reinvented tollway with no control cities shown on the signage as of yet: 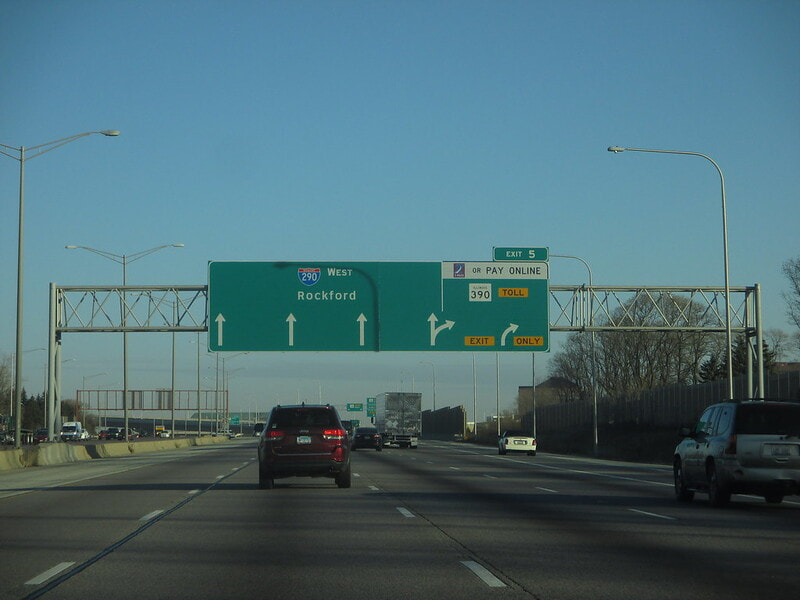 Exit 7 is for the northern beginning of Interstate 355, which heads southward toward Joliet and a nearby interchange to US Route 20: 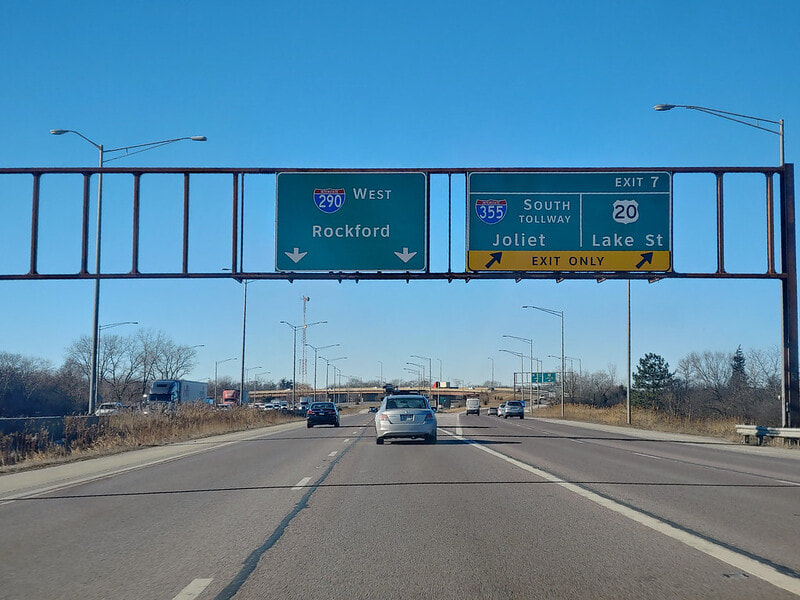 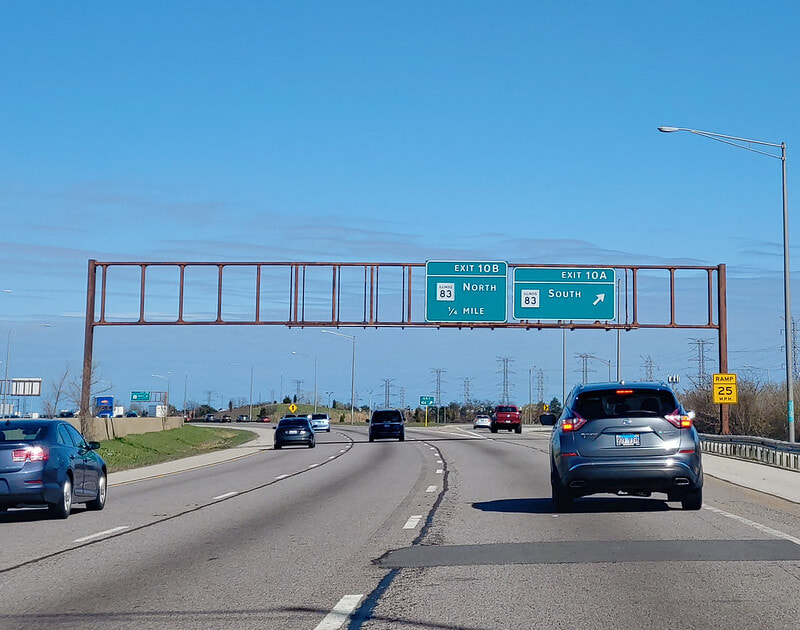 The latter offramp of the interchange, Exit 10B, puts drivers on Illinois 83 northbound: 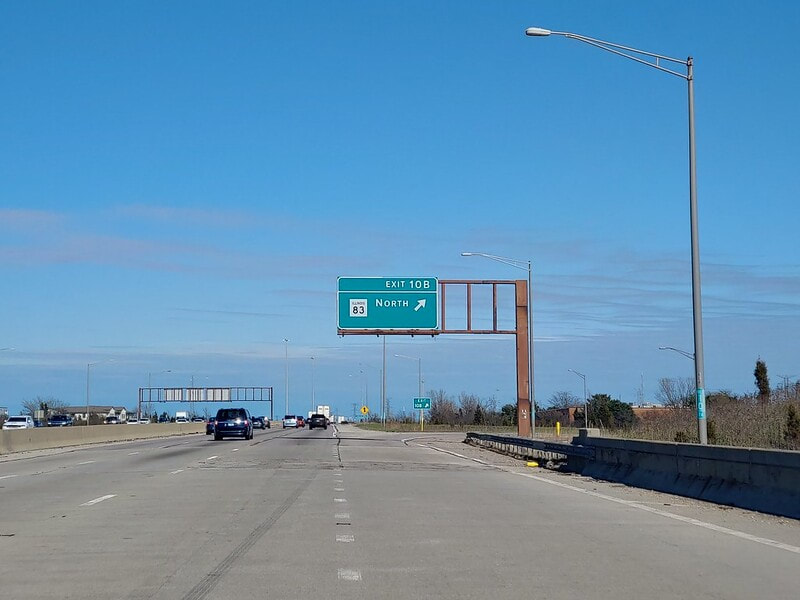 Exit 12 leads to York Road, and allows US Route 20 to join Interstate 290 from the east (or split away westbound): 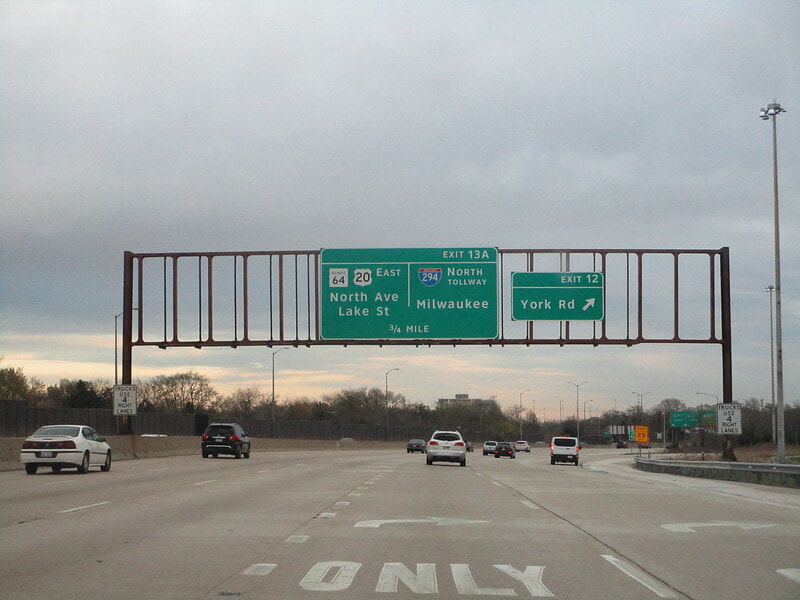 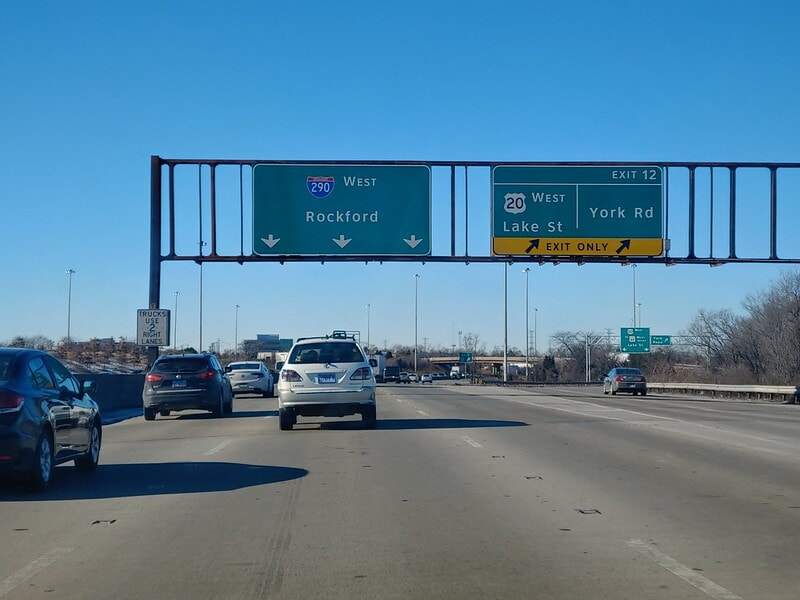 Exit 13A is the first of two ramps at a very strange interchange involving Illinois 64 and US Route 20. Exit 13A takes travelers onto US Route 20 eastbound, also known as Lake Street, indirectly providing access to Interstate 294 northbound via an onramp just to the east: 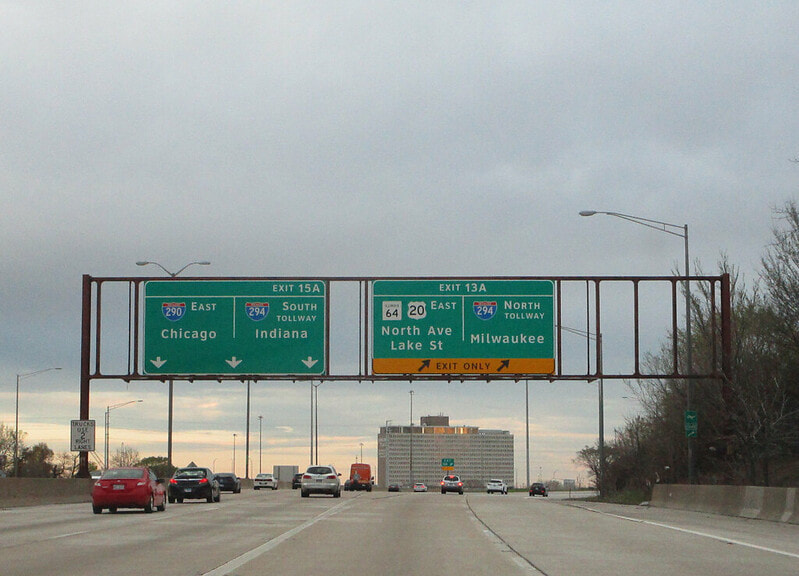 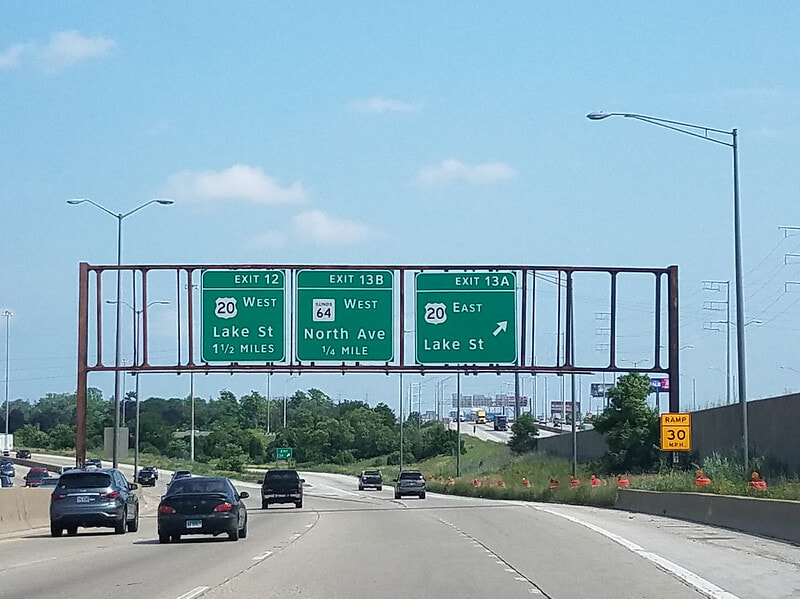 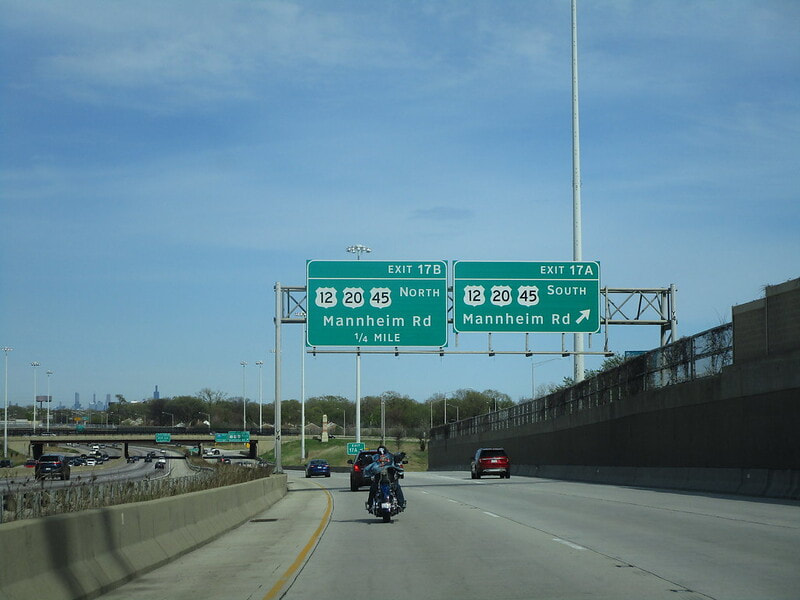 Exit 17B leads to the northbound lanes of US Routes 12 and 45, following Mannheim Road; for westbound travelers, there is a single offramp to Mannheim Road, labeled as Exit 17 instead of 17A and 17B: 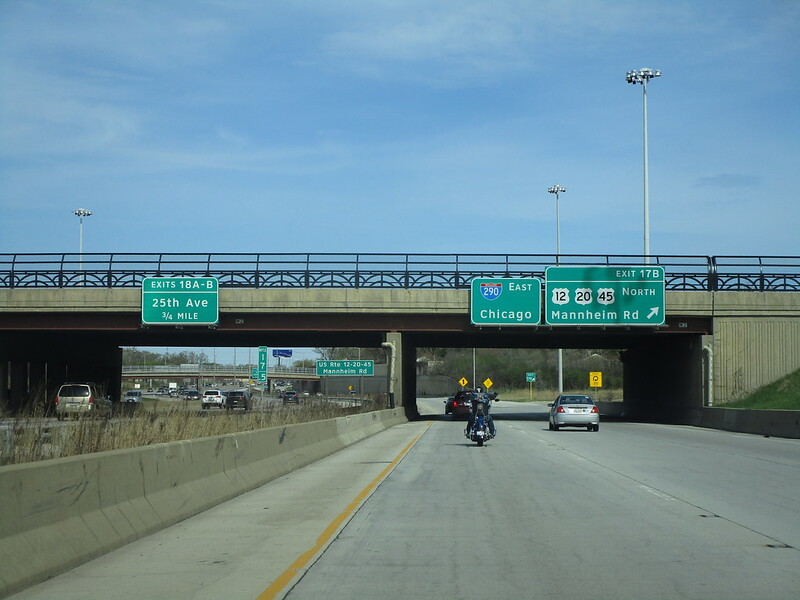 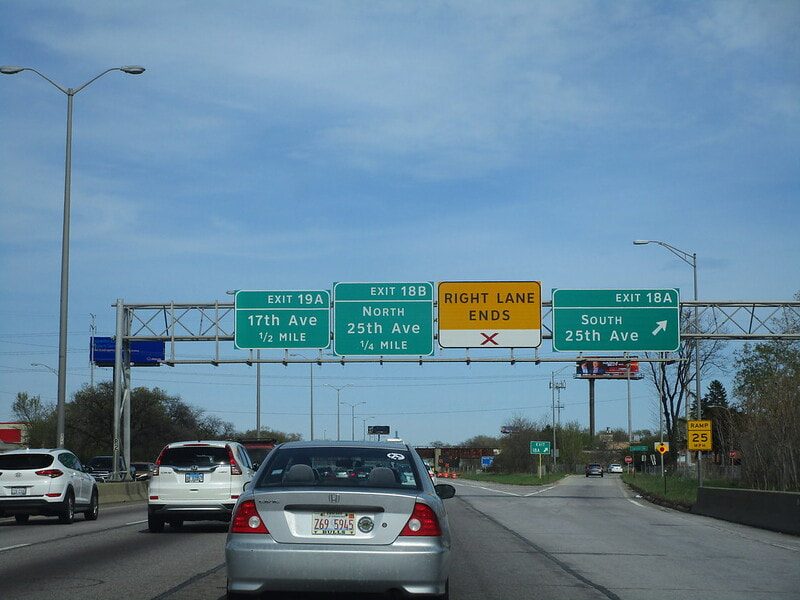 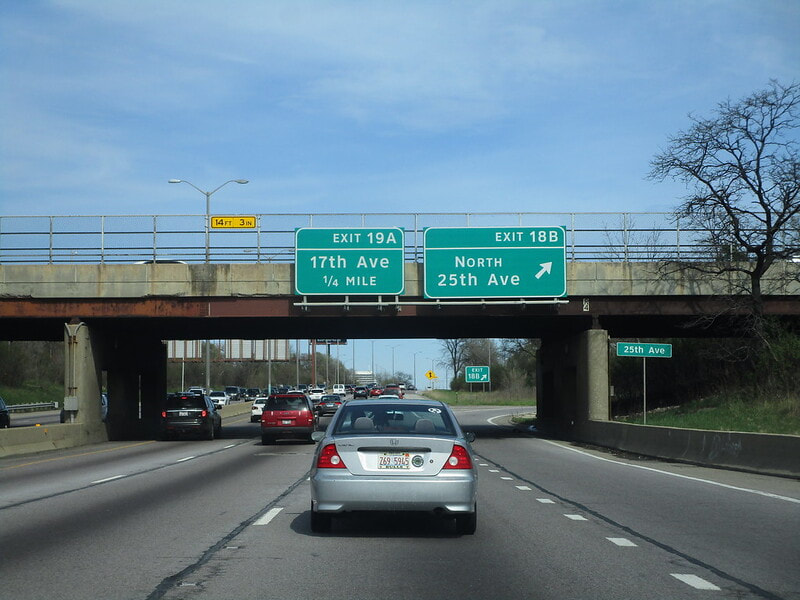 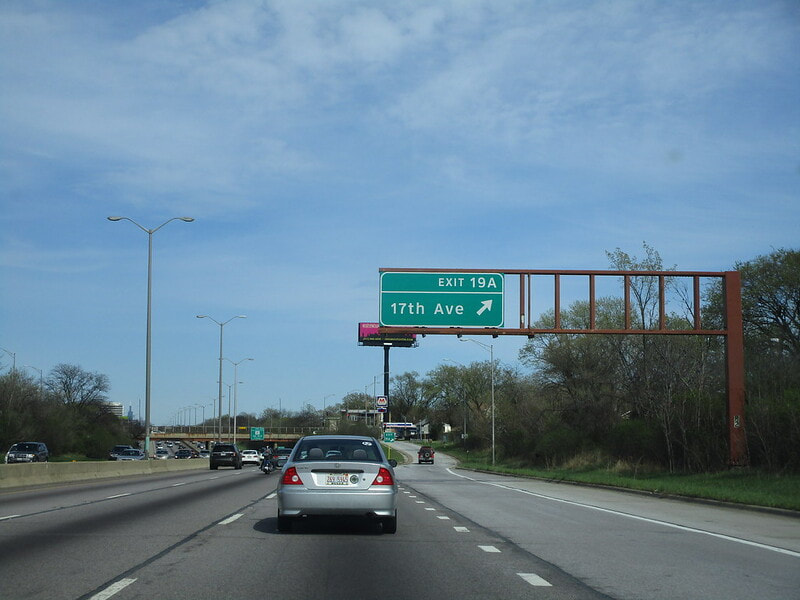 Exit 19B leads to 9th Avenue, but only provides access to/from the east...
Exit 20 is for Illinois 171, which runs along 1st Avenue: 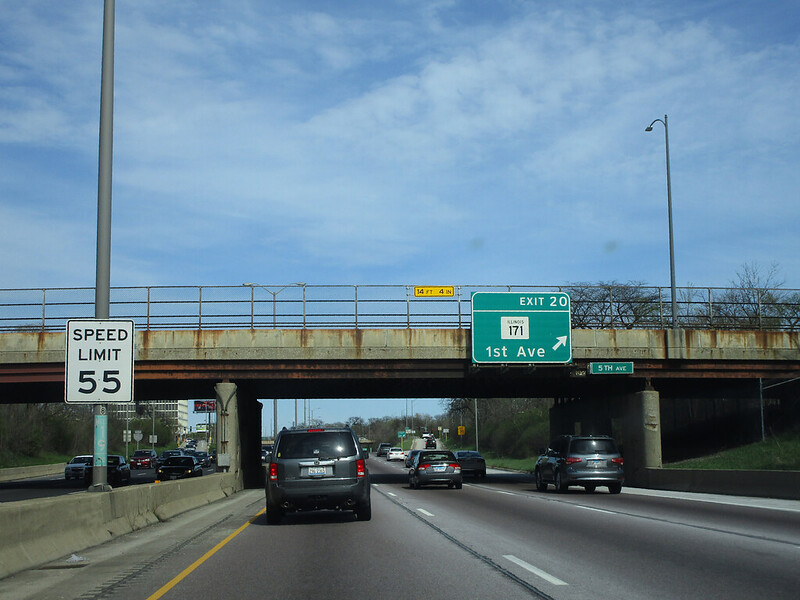 Exit 21A is for Des Plaines Avenue in Forest Park, with access provided only to/from the west: 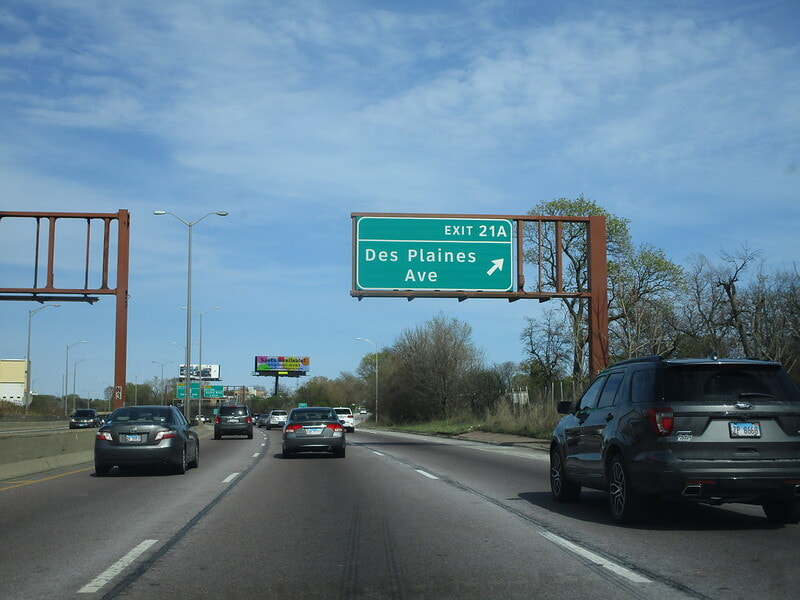 Exit 21B is a left-exit to Illinois 43, which runs along Harlem Avenue: 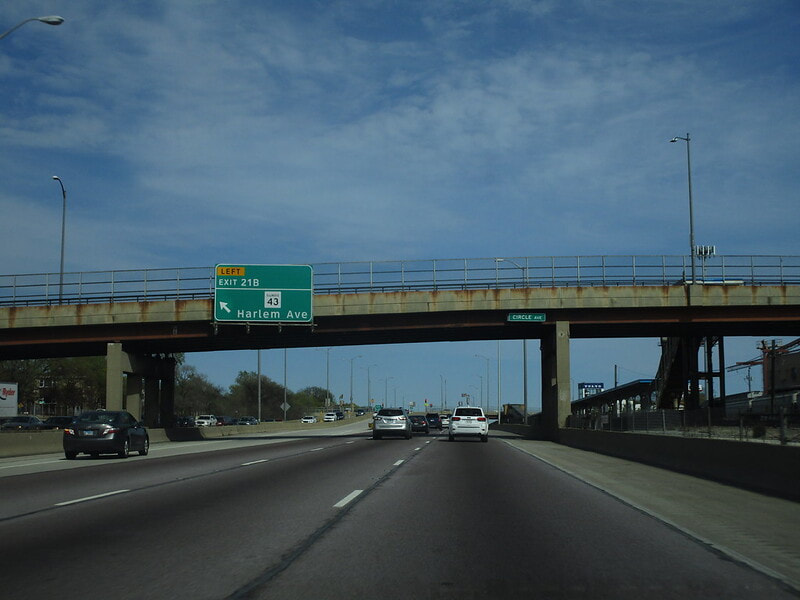 Exit 23A is a left-exit to Austin Boulevard, now squarely within the City of Chicago: 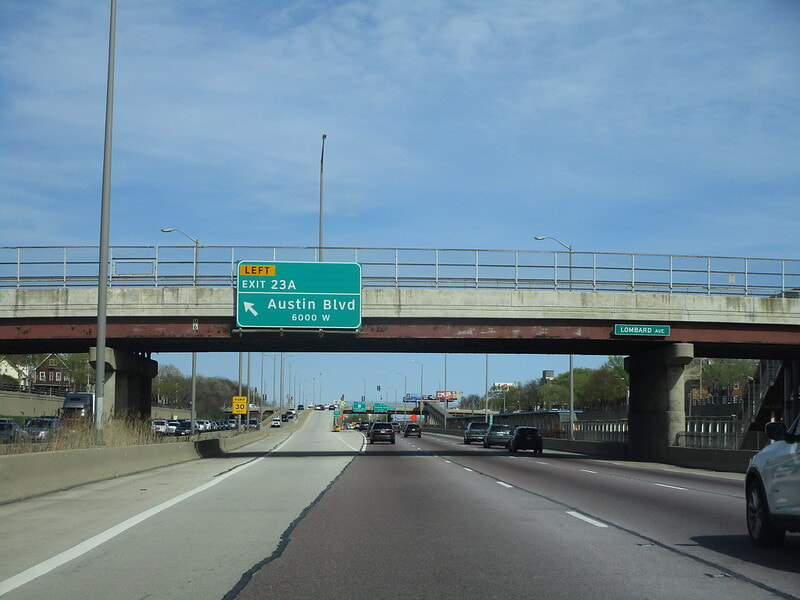 Exit 23B is a regular diamond interchange to Central Avenue: 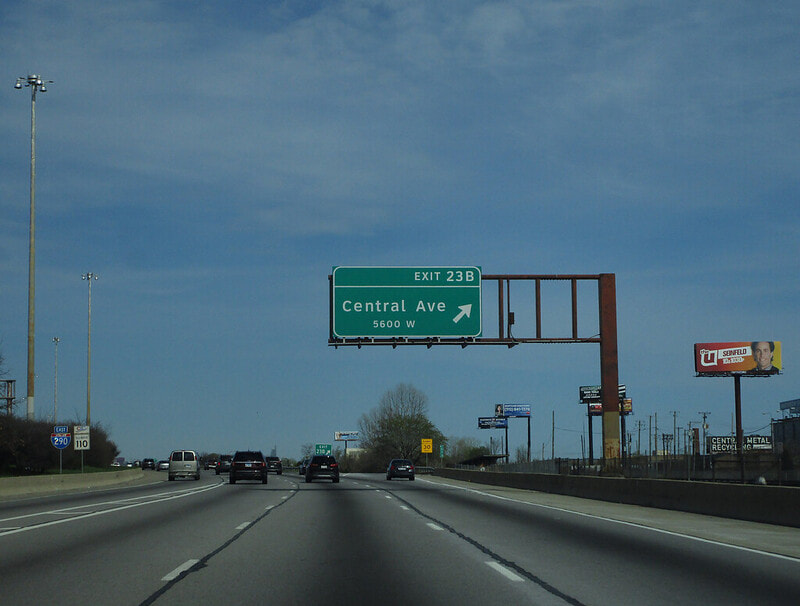 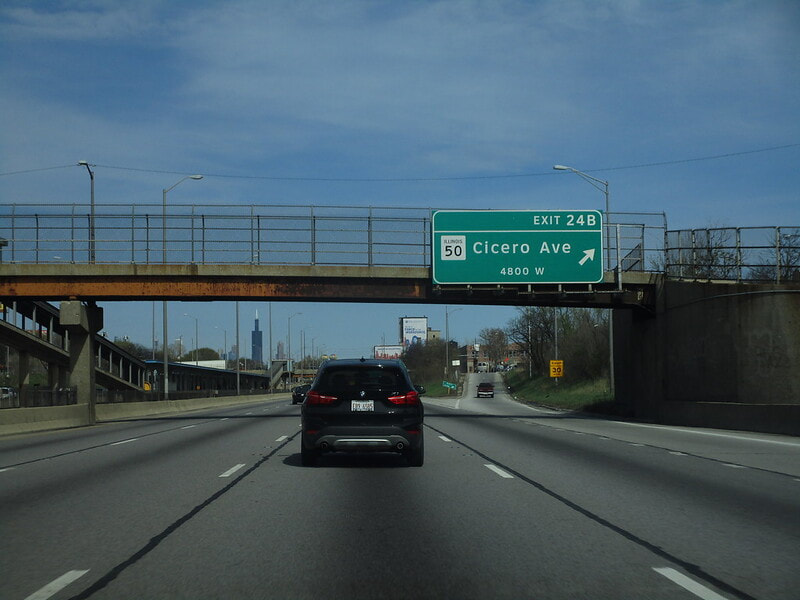 Exit 25 is for Kostner Avenue, but the interchange only connects to Interstate 290 to/from the east...
Exit 26A is a full-access interchange to Independence Boulevard: 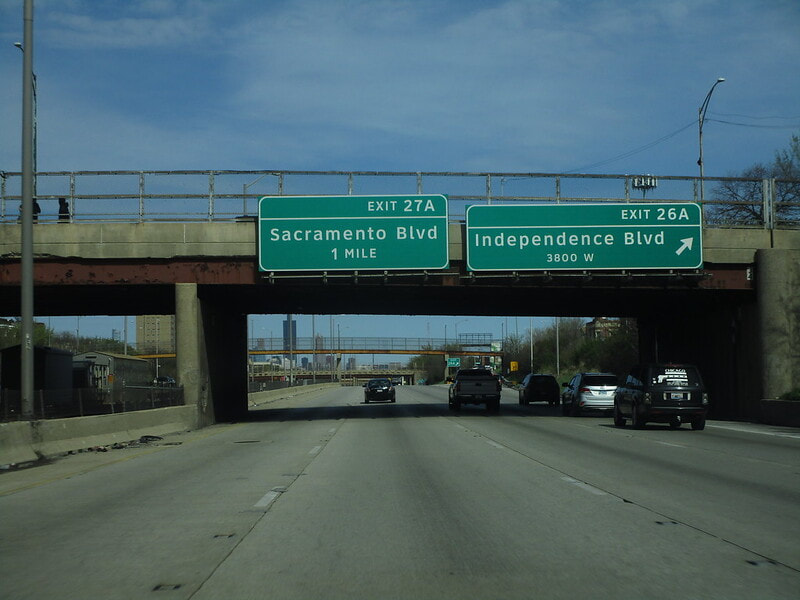 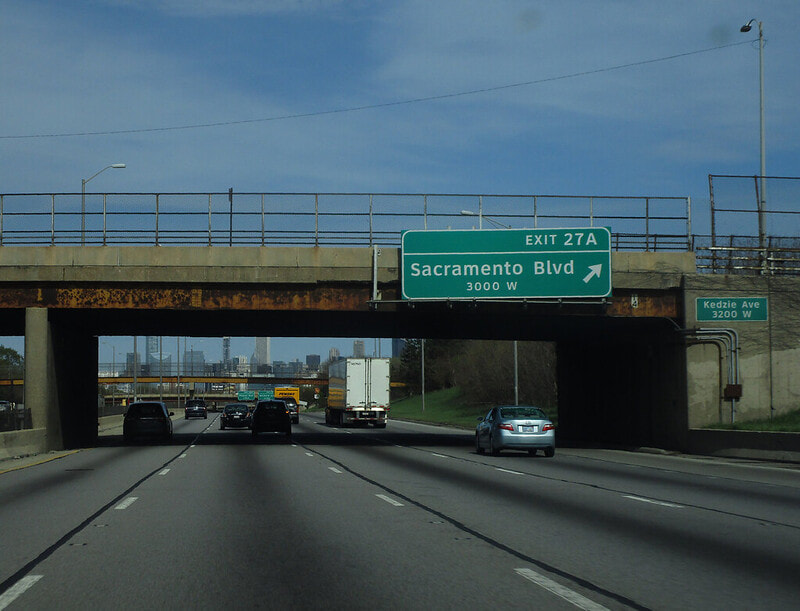 ​Exit 27B is for California Avenue, but access is only provided to/from the east:
Exit 27C provides complete access to Western Avenue: 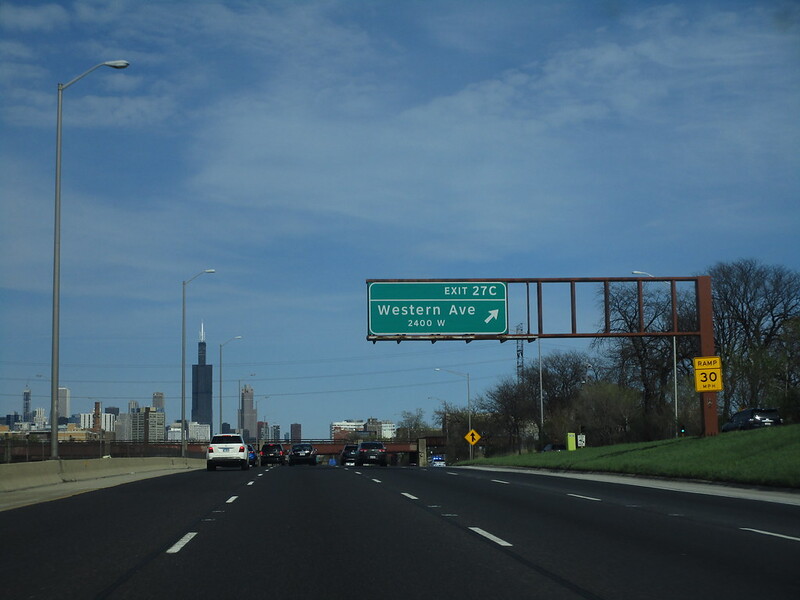 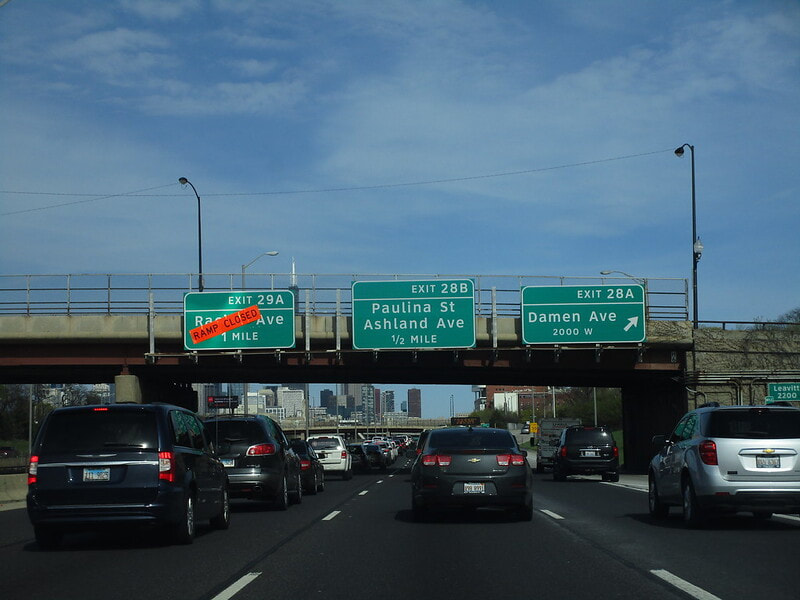 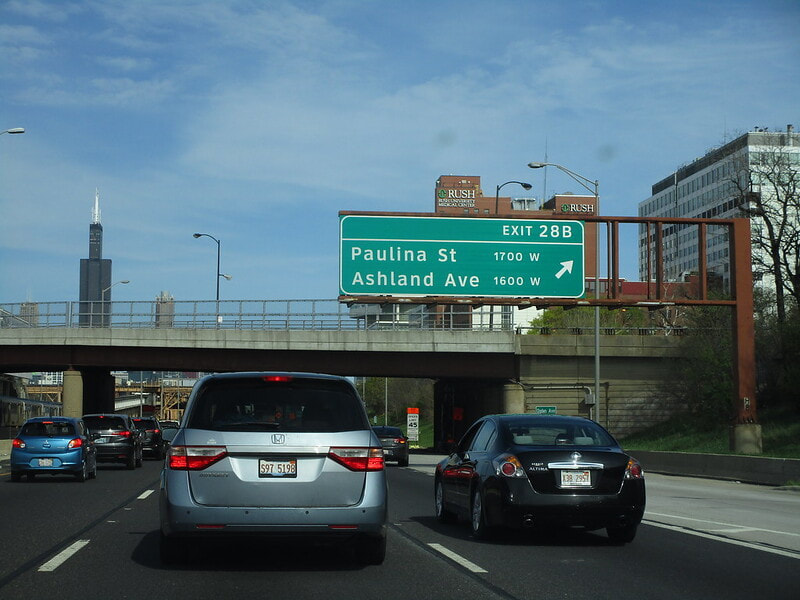 Exit 29A is for Racine Avenue, but access is only provided to/from the west...
Exit 29B is the label applied to two separate unrelated offramps at the Circle Interchange...
Interstate 290 ends at the Circle Interchange, now known as the "Jane Byrne Interchange", connecting with the concurrency of Interstates 90 and 94, which runs north-south through Chicago.  The highway continues east a little farther as Ida B. Wells Drive, formerly known as Congress Parkway, but it deposits traffic into the southern portions of downtown Chicago, becoming a surface street. The Circle Interchange at Interstate 290's eastern end has been under construction for almost nine years, despite an original completion date in 2018. The ramps splitting into Ida B. Wells Drive, Interstate 90/94 north, Interstate 90/94 south, and the southern distributor ramp to Taylor St/Roosevelt Road, all seem to divide at the same point shown in this photo: 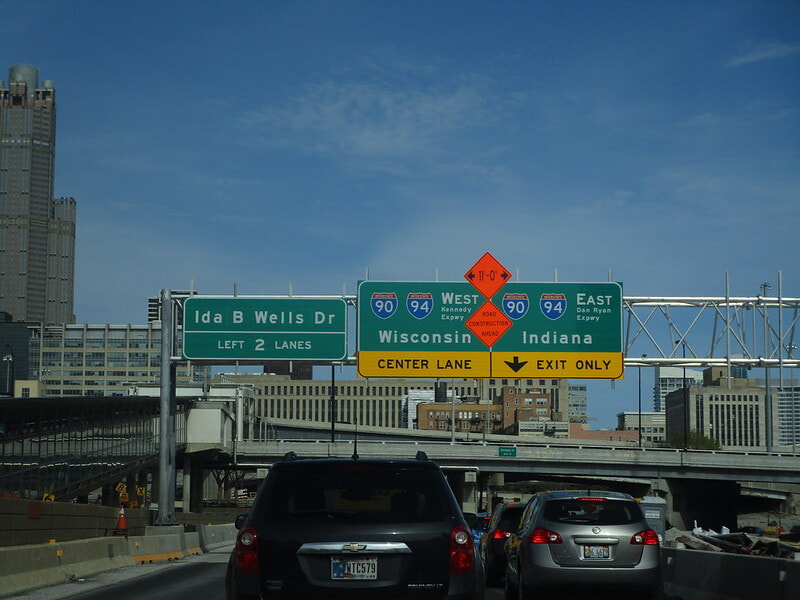 I hope to get a better photo of Interstate 290's eastern end once the construction at the Circle Interchange is finally complete.  But judging by how the project is already four whole years behind schedule, I might be geriatric by the time that happens.
Back to the Illinois main page.
Back to the home page.