PAUL ACROSS AMERICA
US Route 53 isn't one of the longer US highways, but it plays a solid role in connecting northern Minnesota and a whole lot of western Wisconsin.  The northernmost segment of US Route 53 is concurrent with US Route 71 in International Falls, Minnesota, and the two routes run together to a Canadian border crossing into Fort Frances, Ontario.  From there, US Route 53 cuts south to Duluth, at the western tip of Lake Superior.  US Route 53 uses the same massive bridge as Interstate 535 to cross from Duluth into Superior, Wisconsin.  US Route 53 will then spend the rest of its length in western Wisconsin, connecting to Eau Claire and La Crosse.  US Route 53 ends at an interchange with Interstate 90 in La Crosse, thence becoming the short-lived Wisconsin Highway 157.  Note that both Superior and La Crosse are on the border with Minnesota, as US Route 53 effectively divides the western bulge of Wisconsin (known as the "Indian Head" by locals) from the rest of the state. 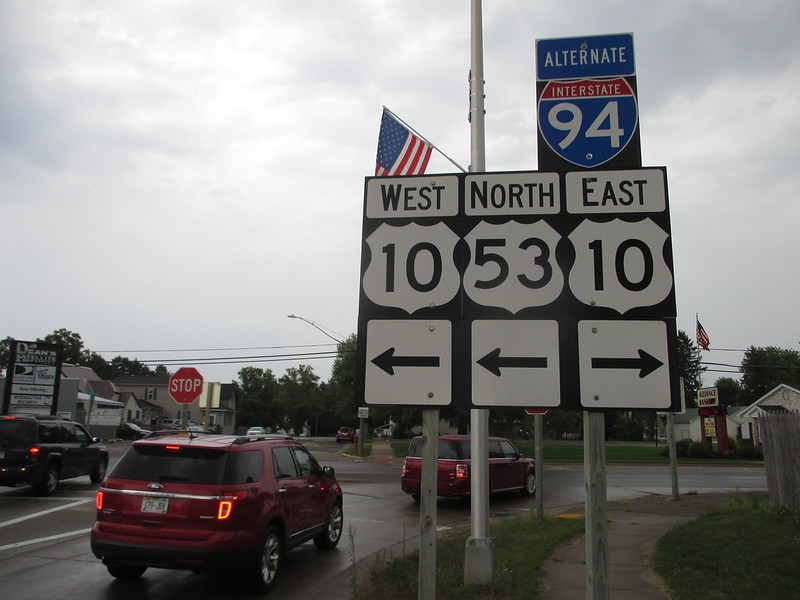 My photo for US Route 53 comes from a stop at a gas station in Osseo, Wisconsin, which took place at the very start of my drive to the Pacific Ocean at Astoria, Oregon in August, 2018.  My shield image for US Route 10 comes from this same photo.  Since I don't like cropping shield images from photos of unisigns (thanks, Wisconsin), I'll probably get a better US Route 53 image in the future during an upcoming trip to northern Minnesota.  The sign assembly shown faces south at an intersection just west of Interstate 94 in Osseo; here, US Route 53 joins US Route 10 west for a bit.
Back to the nationwide home page.
Back to the home page.