PAUL ACROSS AMERICA
US Route 10 runs from the Fargo area east to end in mid-Michigan, using a ferry from Wisconsin to Michigan over Lake Michigan. The western end merges with Interstate 94 west of Fargo, North Dakota.  From there, it heads southeast through Minnesota, staying just north of Interstate 94 until St. Paul.  It crosses St. Paul and Interstate 94, to stay on the south side of that freeway through western Wisconsin. At Osseo, Wisconsin, Interstate 94 dives southeastward while US Route 10 continues east with no interest in following along that Interstate anymore.  It reaches Stevens Point and Appleton before its final Wisconsin town, Manitowoc, where a ferry terminal picks up US Route 10's traffic to take it across Lake Michigan.  US Route 10 enters Michigan disembarking from the ferry at Ludington, Michigan.  US Route 10 heads east into Michigan across mainly rural areas, about two-thirds of the way toward the northern end of Michigan's Lower Peninsula. The eastern end is at Bay City, Michigan, at Interstate 75.  US Route 10 used to continue west all the way to Seattle, Washington, on the Pacific Coast, but Interstate 94 and Interstate 90 effectively replaced it west of Fargo, North Dakota. 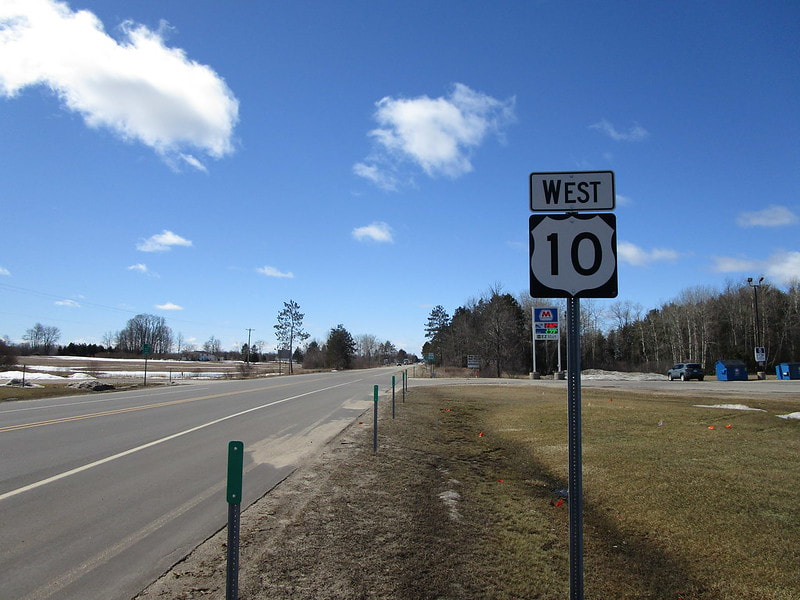 My photo of US Route 10 comes from near Evart, Michigan, at the 4-way intersection with Michigan Highway 66.  This is the westbound trailblazer for vehicles leaving the junction. This photo was taken as I was routesnapping Michigan on the state level in March, 2019.
Back to the nationwide main page.
Back to the home page.