PAUL ACROSS AMERICA
Interstate 70 is the fifth-longest Interstate, running from Baltimore, Maryland, west through the middle of the country. It ends merging with Interstate 15 in the middle of Utah.  Major cities served by Interstate 70 include Columbus, Ohio; Indianapolis, Indiana; St. Louis, Missouri; Kansas City, Missouri; and Denver, Colorado. The eastern end is an interchange with Maryland Route 122 in Baltimore, just a mile east of, and inward from, the peripheral beltway known as Interstate 695.  Interstate 70 heads west from there through Frederick and Hagerstown to Hancock, Maryland, where it turns north into Pennsylvania.  Soon after that northward turn is the infamous configuration in Breezewood, where Interstate 70's traffic is dumped onto a surface road carrying US Route 30. Then, that traffic can use another interchange to get on Interstate 76 west, which begins to also carry the Interstate 70 designation.  Breezewood is a repugnant travesty that deprives Interstate 70 of its continuity, and it should be SHUNNED!!!1!1!!  At New Stanton in southwestern Pennsylvania, Interstate 76 splits from Interstate 70; note that the portions concurrent with Interstate 76 follow the Pennsylvania Turnpike, which is a tollway.  From New Stanton, Interstate 70 continues west across Wheeling, West Virginia, in the narrow northern peninsula of that state.  Interstate 70 cuts across the middle of Ohio, accessing Columbus and the northern parts of the Dayton area.  The route enters Indiana at the city of Richmond, Indiana, passing westward through downtown Indianapolis, where it turns west-southwesterly. The west-southwesterly bent continues across the whole width of southern Illinois so it can directly access St. Louis, Missouri. Interstate 70 crosses the middle of Missouri, nearly due westward to Kansas City, where it crosses into Kansas.  Interstate 70 continues west past Lawrence, Topeka, and Salina.  In the next state, Colorado, Interstate 70 heads right through Denver, ascending into the Rocky Mountains immediately afterward.  The portion of Interstate 70 from Denver west to Grand Junction, Colorado, is the most beautiful stretch of Interstate in existence, in my opinion.  Past Grand Junction, Interstate 70 enters its final state, Utah.  The end occurs at Interstate 15 in the middle of nowhere, in Millard County. This endpoint has a third of Utah to the west of it, and a third of Utah south of it.  The majority of traffic reaching the endpoint joins Interstate 15 southwest toward Las Vegas and Southern California. 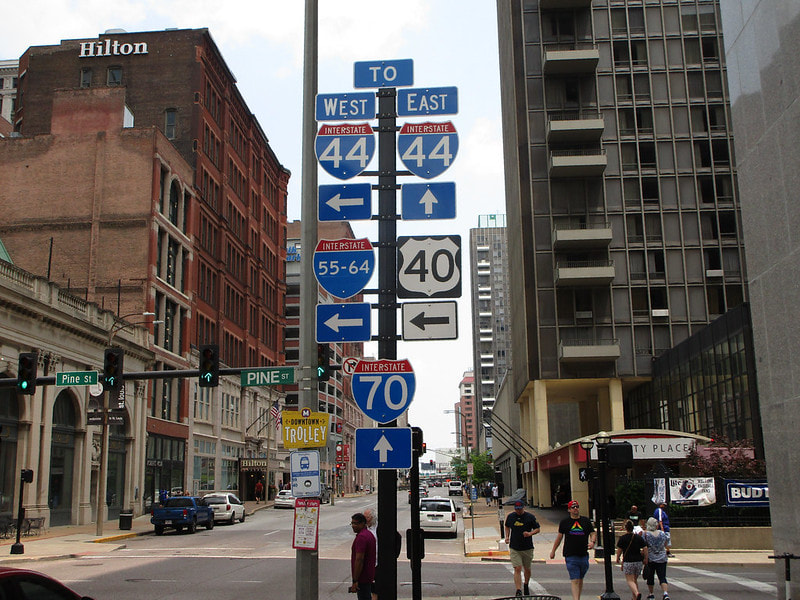 My photo of Interstate 70 comes from a street corner in downtown St. Louis, where a large sign assembly directs vehicles to the various freeways in the area (yes, that includes the US Route 40 freeway). The aperture looks north along 4th Street, at its intersection with Pine Street.  I took this photo in June, 2019, during a trip to St. Louis using only trains! Interstate 44, Interstate 55, and Interstate 64 (which carries US Route 40) are also mentioned on the signs.
Back to the nationwide main page.
Back to the home page.