Iowa Route 165 is a very short state highway along Abbott Drive in Carter Lake, Iowa, an exclave surrounded by Omaha, Nebraska.  The original definition of the border between Nebraska and Iowa comes from a centuries-old mapping of the course of the Missouri River.  However, rivers often change course, and a former meander in the Missouri River had its corner cut.  This left behind an oxbow lake, now called Carter Lake, and the lobe of Iowa protruding into Iowa became cut off from the rest of the state by the river.  The municipality separated from the rest of Iowa by the river also became known as Carter Lake.  Iowa Route 165 is only about a half-mile in length, and both of its ends are border crossings into Nebraska.  Abbott Drive, of which a piece is Iowa Route 165, is instrumental to Omaha residents seeking access to Omaha's main airport. Fortunately for people hunting for route markers to photograph, both points where Abbott Drive becomes Iowa Route 165 are clearly marked with a big Iowa welcome sign and an Iowa Route 165 marker.  The signage at the southbound beginning appears in the cover photo shown above, offering a view of a piece of Omaha's skyline in the background. 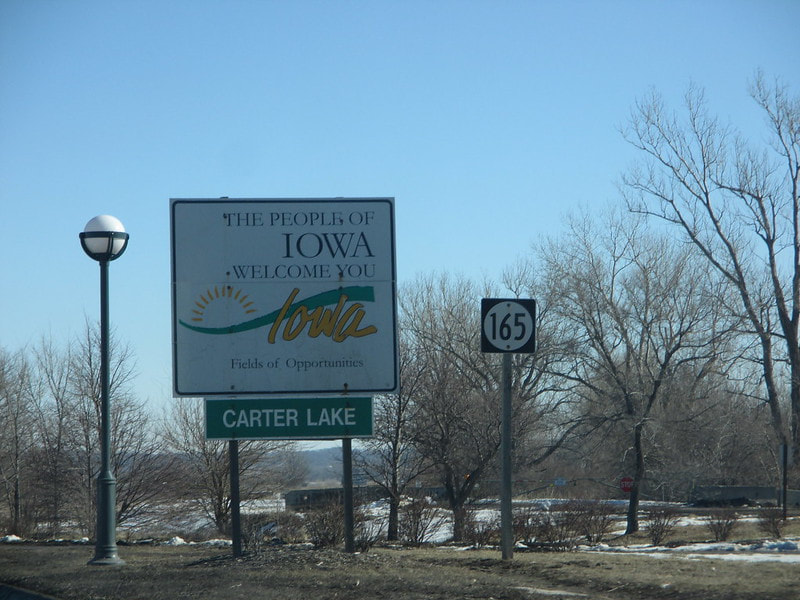 The signage at the northbound beginning is the photo of choice shown here, however.  The sign photo I choose for the main photo on each highway's page is the context for my shield image shown on the menu page.  In this case, we have the signage announcing the southern beginning of Iowa Route 165 to northbound traffic on Abbott Drive headed for Omaha's airport. This photo was taken in February, 2016, during a trip to Omaha.
Back to the Iowa main page.
Back to the home page.