Yellowstone National Park is America's first national park, loaded with mountains, waterfalls, rock formations, and curious volcanic activity.  Regretfully, we didn't get to see as many things as I wanted during our visit, because the park is constantly overcrowded with vacationers who like to take a vacation from driving while they're behind the wheel of a car.  Since the park needs to provide the ability for people to pass through it, and its layout isn't linear in a way that would lend itself well to a bus route, a park-and-ride transit system hasn't been established, like in a few other crowded national parks.  I didn't get to see any waterfalls, but during our visit in August 2018, we saw the Grand Prismatic Spring, the Fountain Paint Pots, Old Faithful Geyser, and the Mammoth Hot Springs area.  I also included some photos of bison and a bighorn sheep in part 3.

The Grand Prismatic Spring is one of the most famous wonders in Yellowstone National Park.  It's a big lake housing water that emanates from below the ground, making it a spring.  The distinction between this spring and others is that a wide spectrum of color surrounds the lake containing the water.  The red soils transition through the spectrum of color to the blue water. 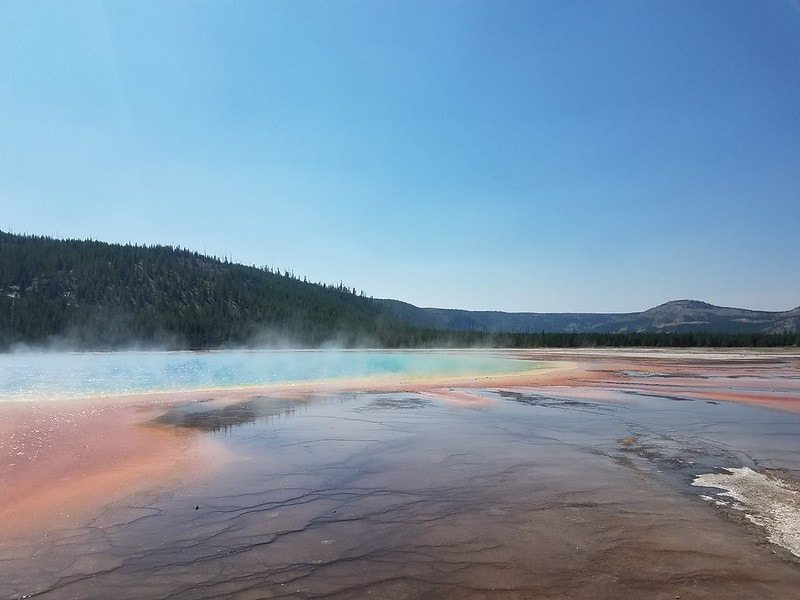 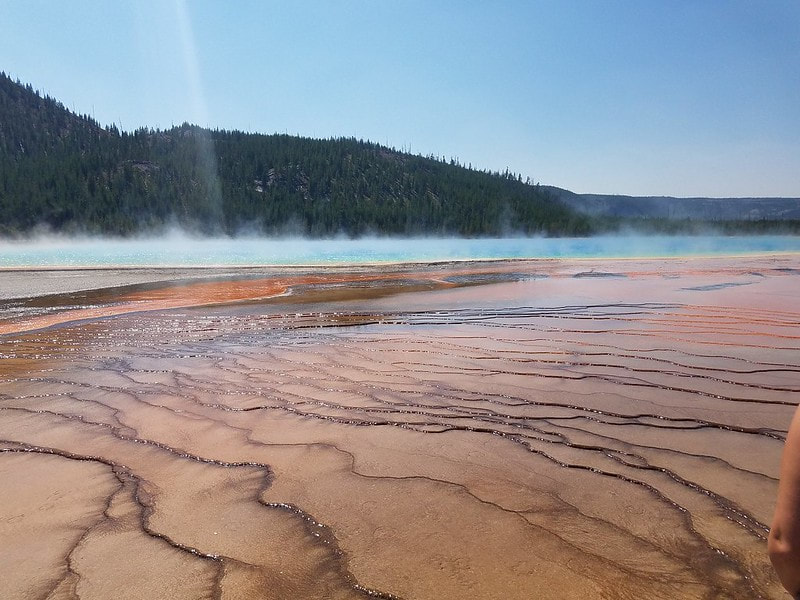 As you can see, I skipped to the good part in the first two photos, showing you the Grand Prismatic Spring itself.  The colors are more obvious when viewed from above, but visitors are restricted to viewing the Spring from boardwalks traversed by foot, for the sake of safety; drone piloting is forbidden here, to boot.  The photo below shows one of the first scenes you'll see when you start out on the very short trail to the Grand Prismatic Spring.  A mountain stream flows here, but something is a bit unusual: look at all the steam, and the sulfur-tainted water pouring into the side of the stream. 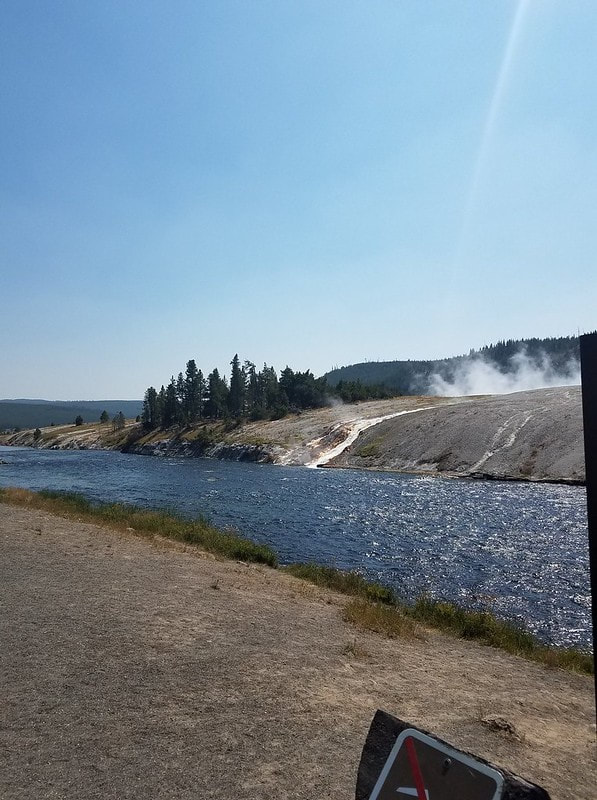 Steam emanates from this nearby pool, in a similar scenario to that of the Grand Prismatic Spring, but with less color variation: 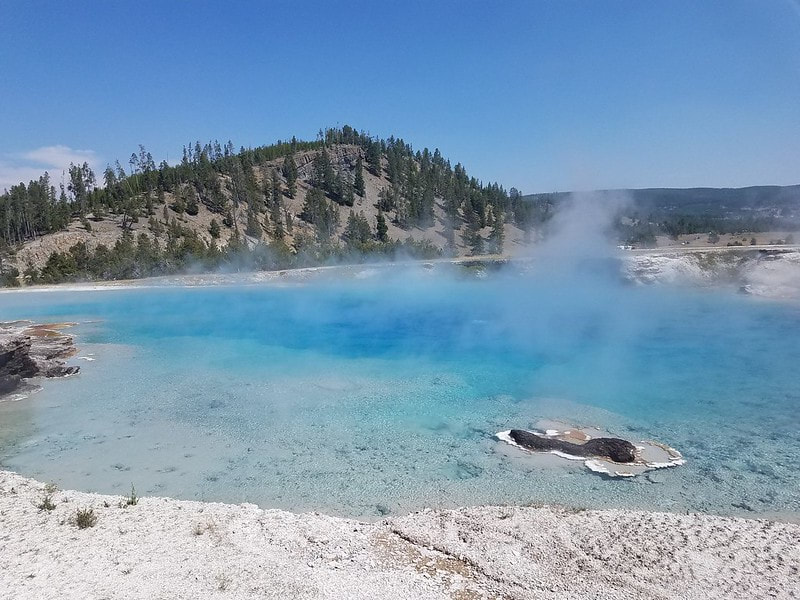 This is a neat little trail showing different little "pots" of water, changed to various colors as they are tainted by different chemicals.  Before the "paint pots" themselves, though, here's a little bubbling steaming spring: 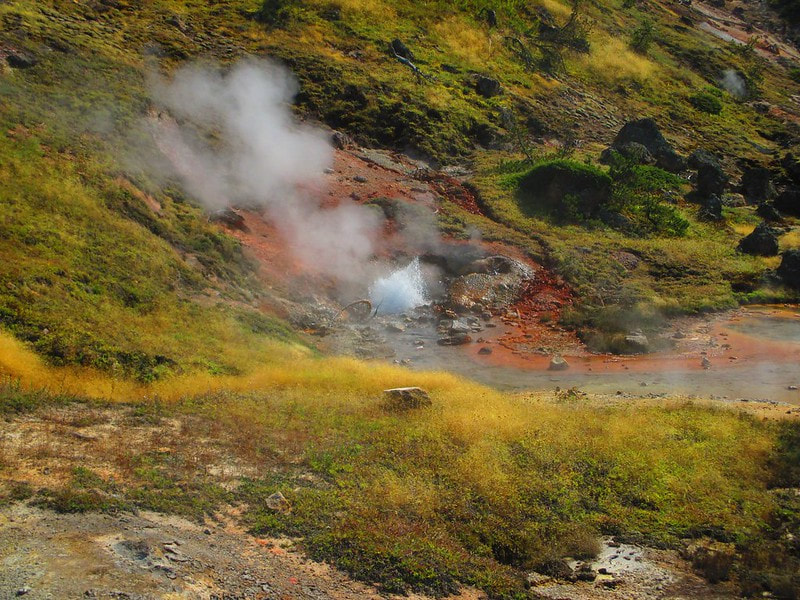 This very unstable, sulfuric soil is not to be traversed by humans.  People must be very careful to stay on the boardwalk paths.  Severe chemical burns can result from straying from the path. This type of white, cracked, nearly liquid soil could also be found at Bumpass Hell in Lassen Volcanic National Park.  It's the result of volcanism. 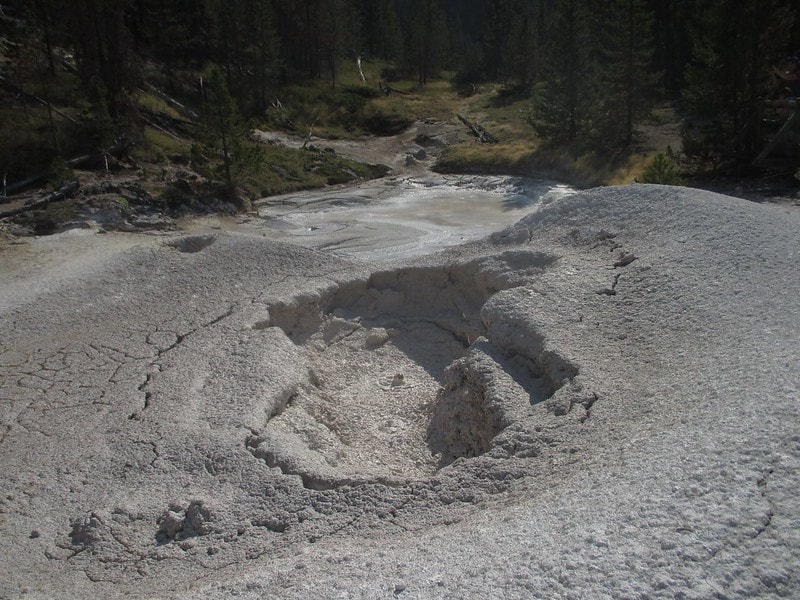 Now, onto the "paint pots" themselves: here's the red one: 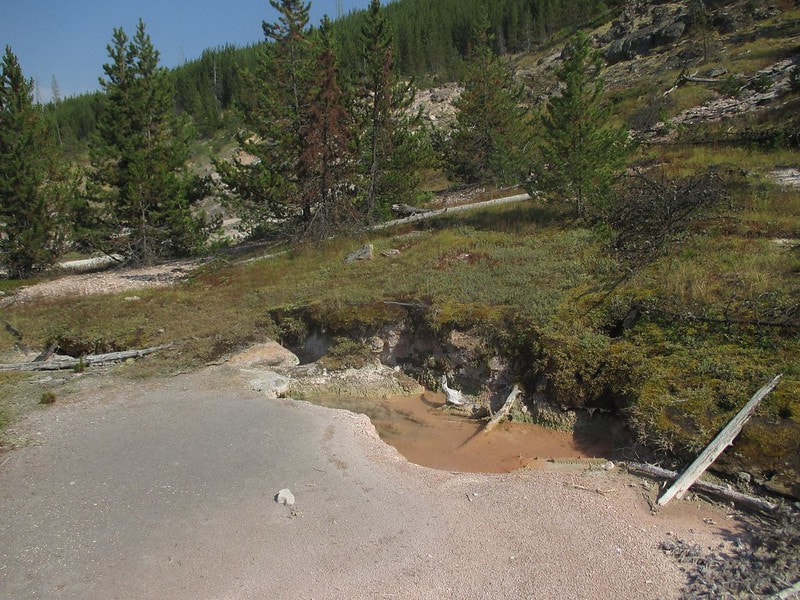 This is one of the blue "paint pots." 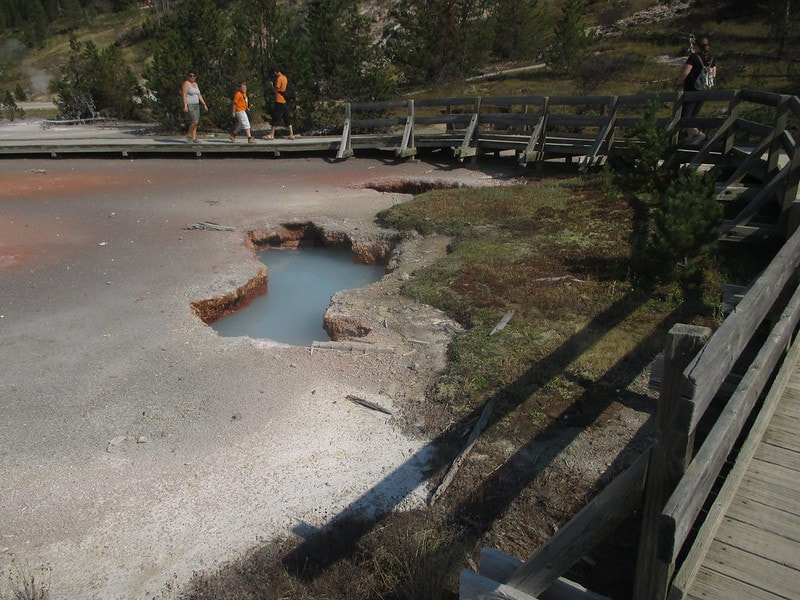 This weird paint pot is a yellowish color: 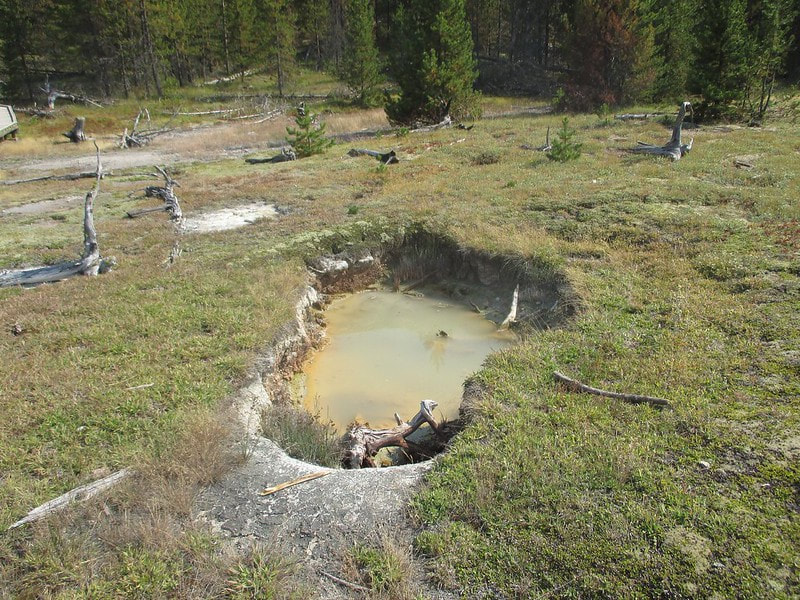 This last "paint pot" is white: 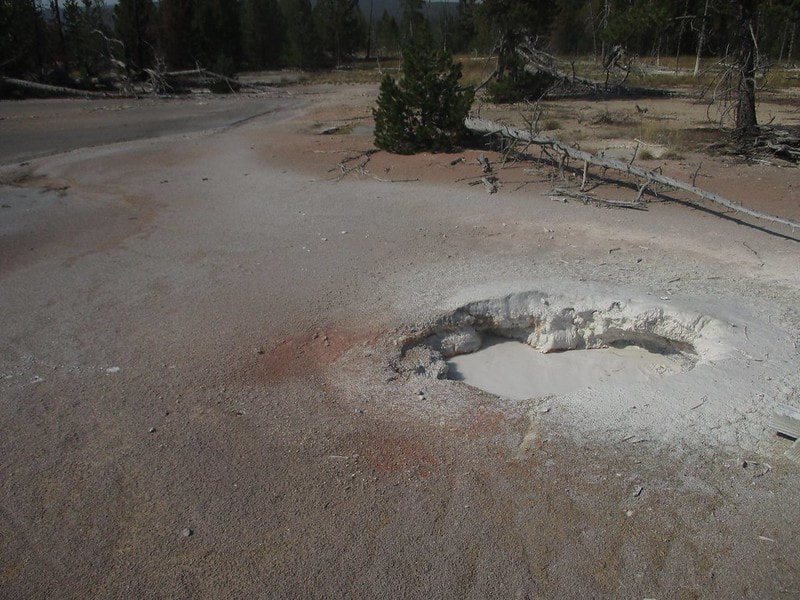 Here's Old Faithful erupting!  Old Faithful is a geyser, and it's one of the most dependable geysers, sticking to a schedule more reliably than any other geyser in the world.  The eruptions last from 90 seconds to 5 minutes, and they occur every hour and fifteen minutes, on average.  The intervals between eruptions can last from one to two hours, though, all things considered. Geysers are overall unpredictable in when they decide to erupt, so Old Faithful doesn't have to be very steadfast in keeping a schedule for it to qualify as one of the world's most predictable geysers.  In any event, you may want to plan on hanging around the Old Faithful area for just over an hour to guarantee a sighting of one of its eruptions.  The water will fly about ten to fifteen feet high above the ground.  And look at all the people who crowd around the geyser once it decides to do its thing: 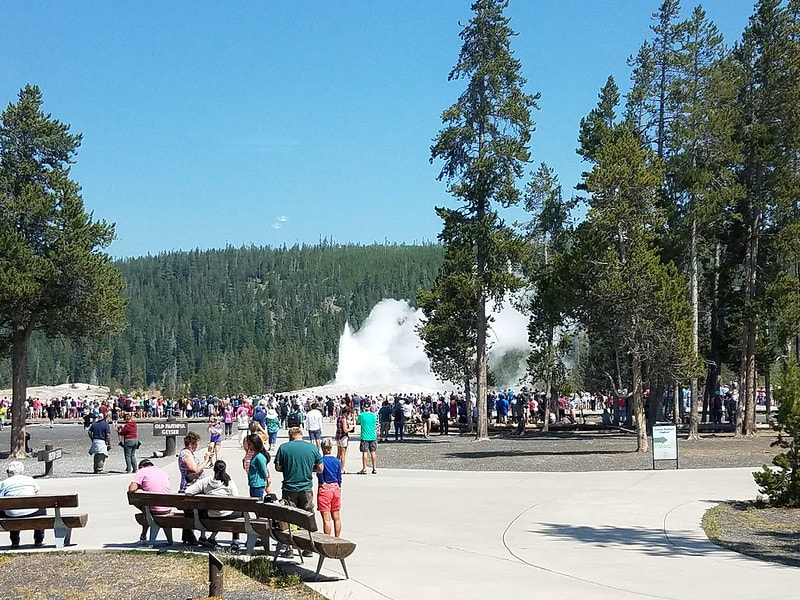 The huge crowds in Yellowstone National Park are evident in that previous photo.  The crowding isn't the only thing that can slow down your travel through the park, however. Bison are all around the park as well, and they will stand in the middle of the road and cut off traffic for 30 to 60 minutes at a time.  You should fully expect that your itinerary will have to eschew one of your planned activities because you had to wait for a bison to get out of the roadway, or because people in front of you are gawking at literally everything instead of driving within 15 mph of the posted speed limit. 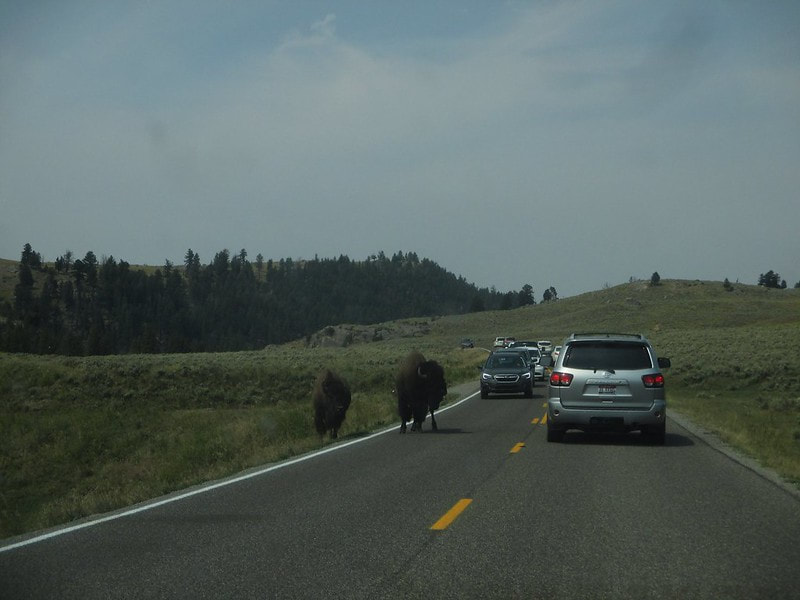 It's really cool to see the herds of bison prospering within the park, though: 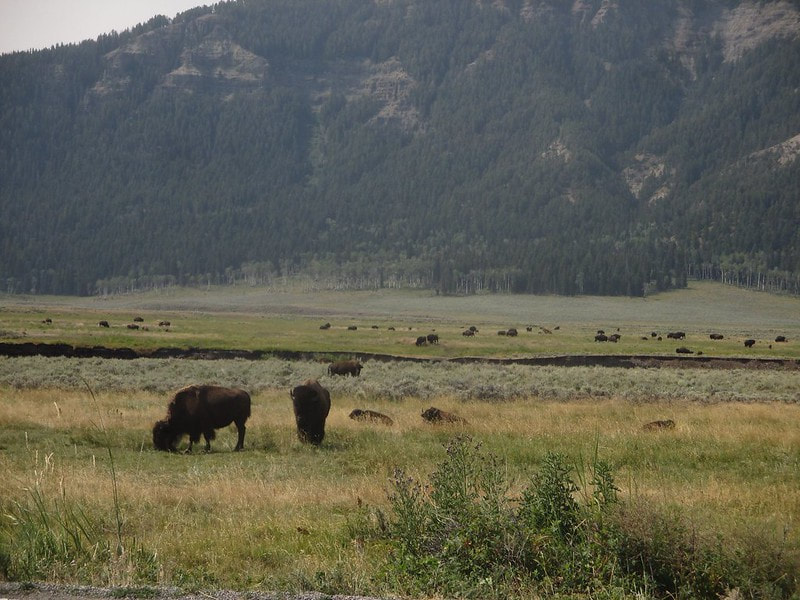 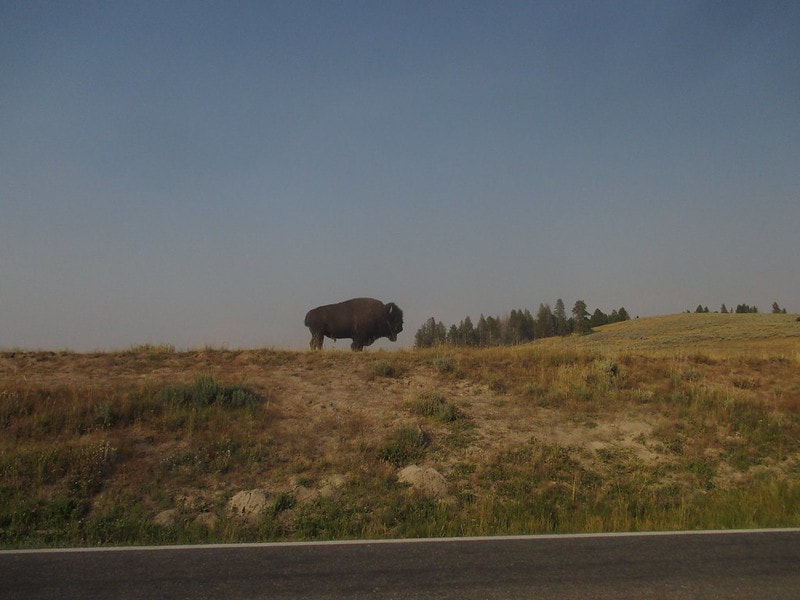 Leaving the park on the first day of our visit, we encountered this bighorn ram right on the side of the road.  Since he was walking right down the white line on the side of the road, my wife decided to name this guy "Sobriety Sheep."  He looked like he was giving himself a field sobriety test!  SOBRIETY SHEEP! 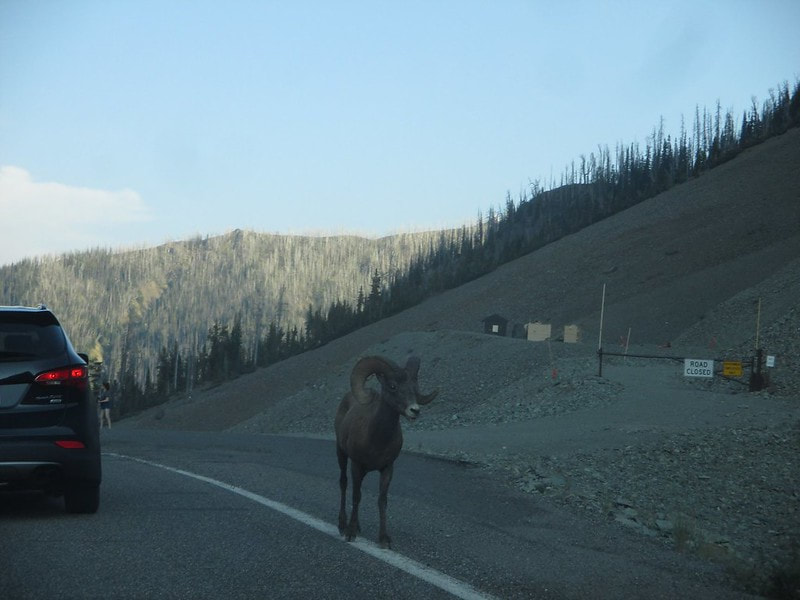 The last day of our visit was dedicated to checking out Mammoth Hot Springs, on the north end of the national park.  It seemed like Mammoth would provide us with a decidedly different experience from everything else we had seen in the park.  Look at these cliffs- they almost appear icy in the middle of August.  But that white color isn't from snow; it's from the sulphurous soils resulting from volcanism. 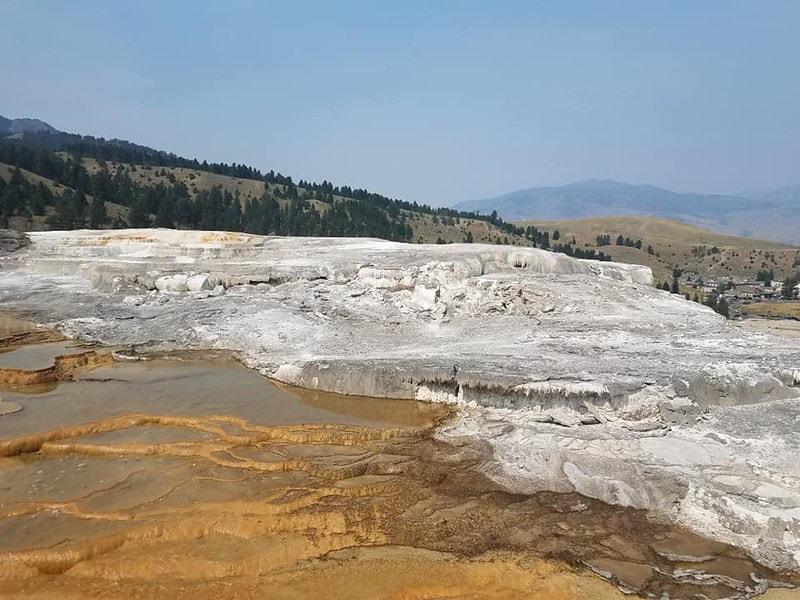 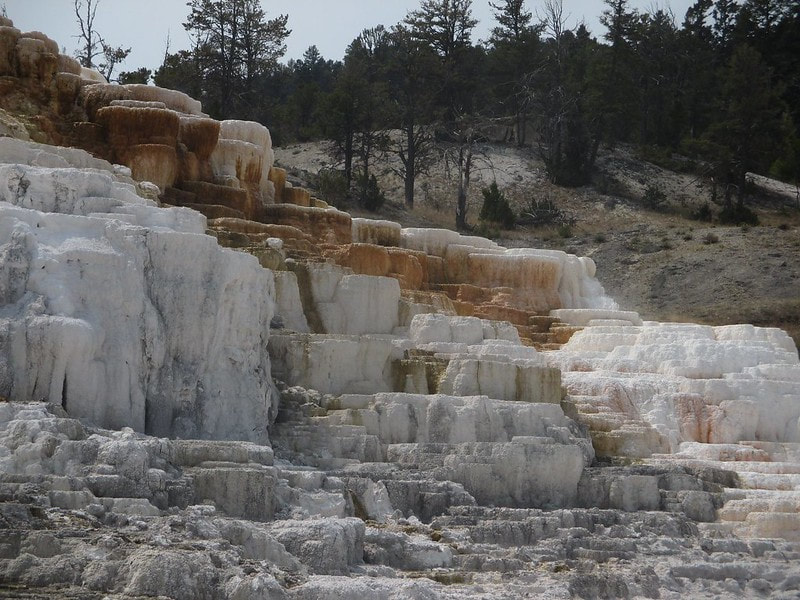 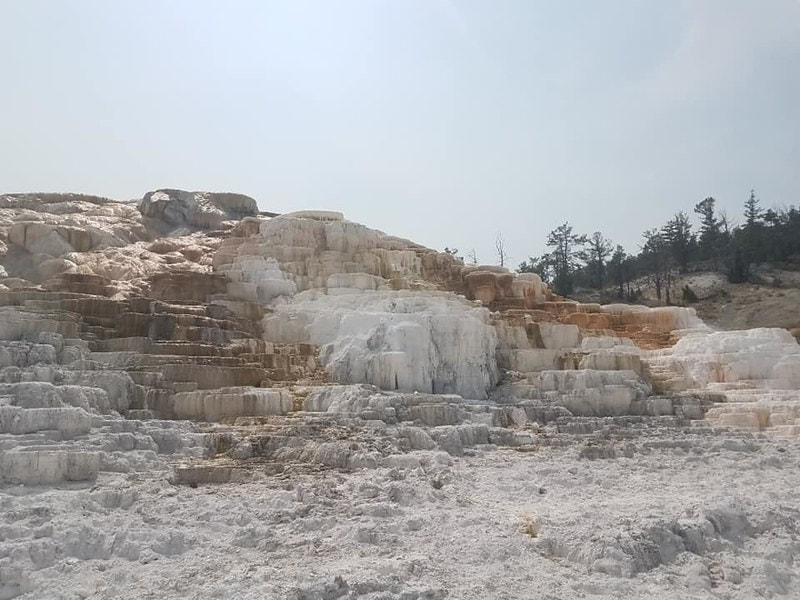 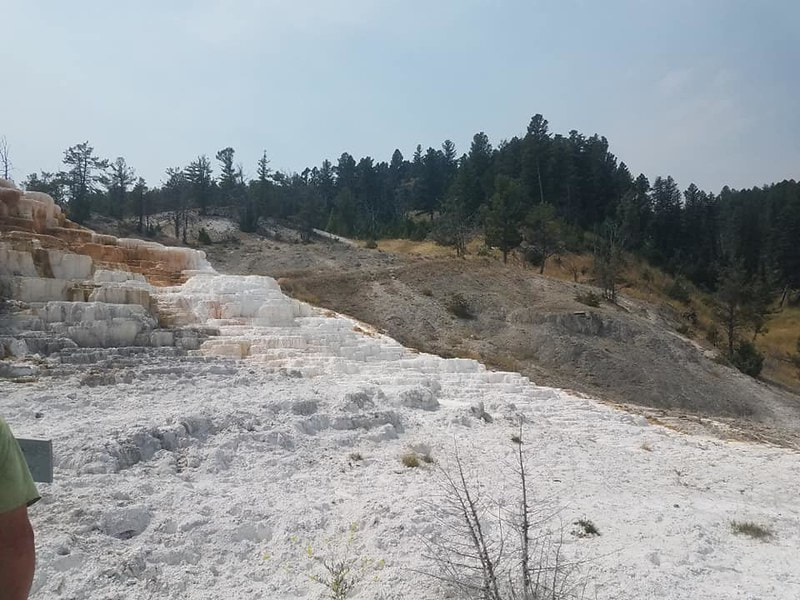 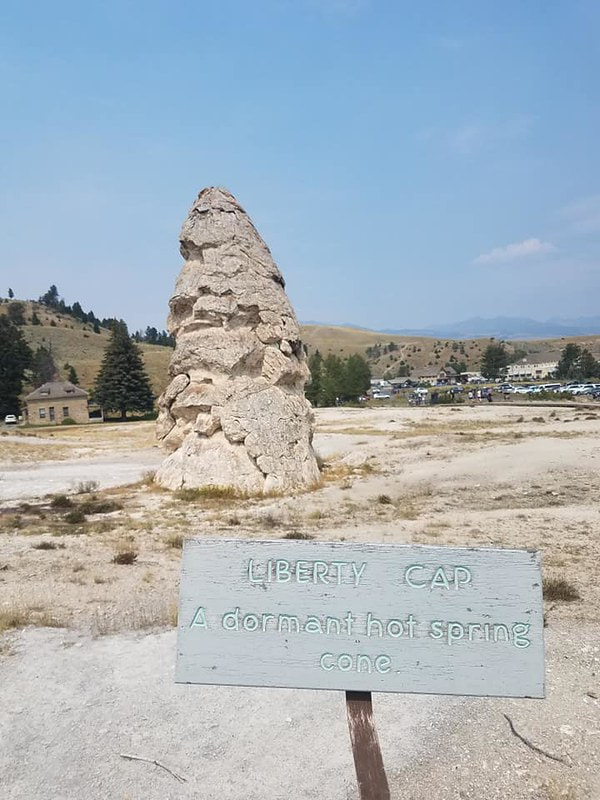 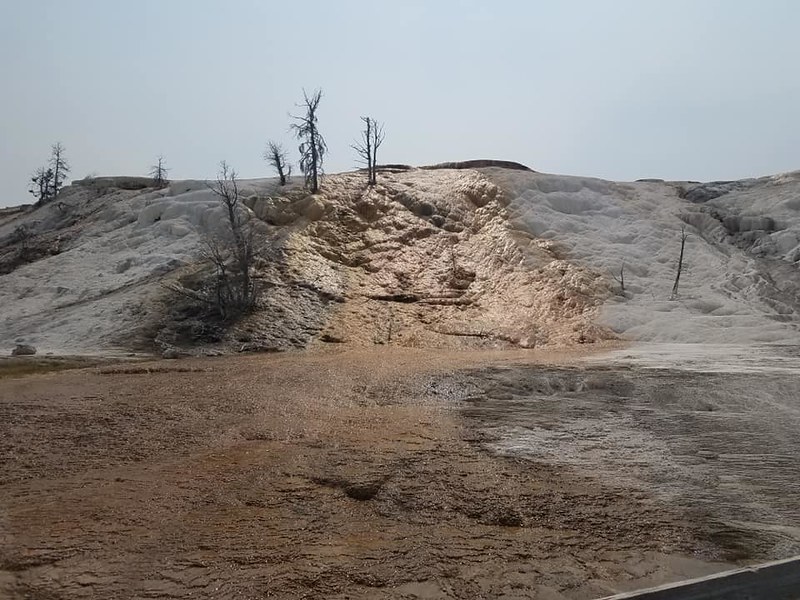 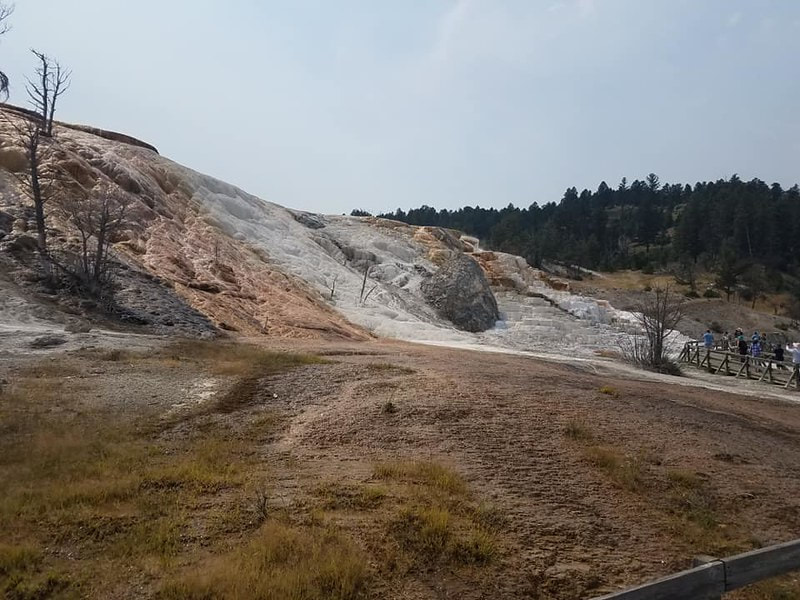 There's some more of that pale blue water we've seen in places like the Fountain Paint Pots and Bumpass Hell (in Lassen Volcanic N.P.): 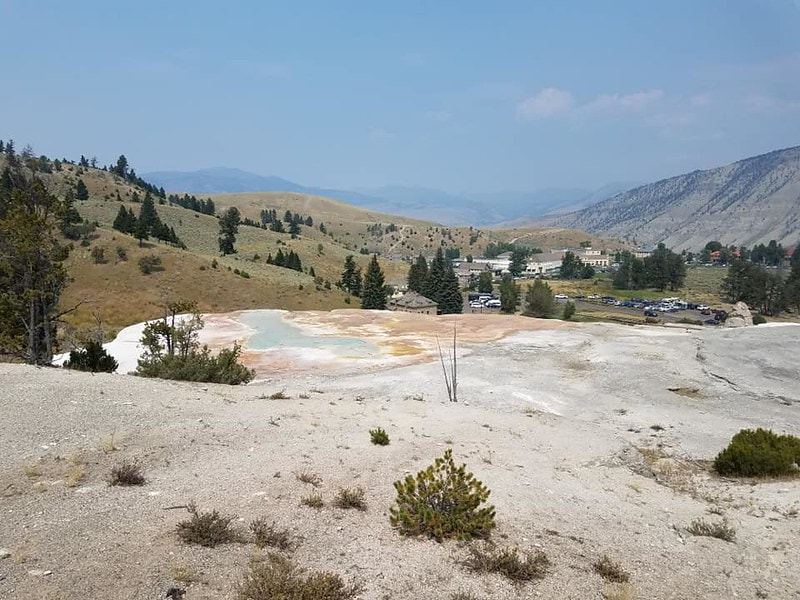 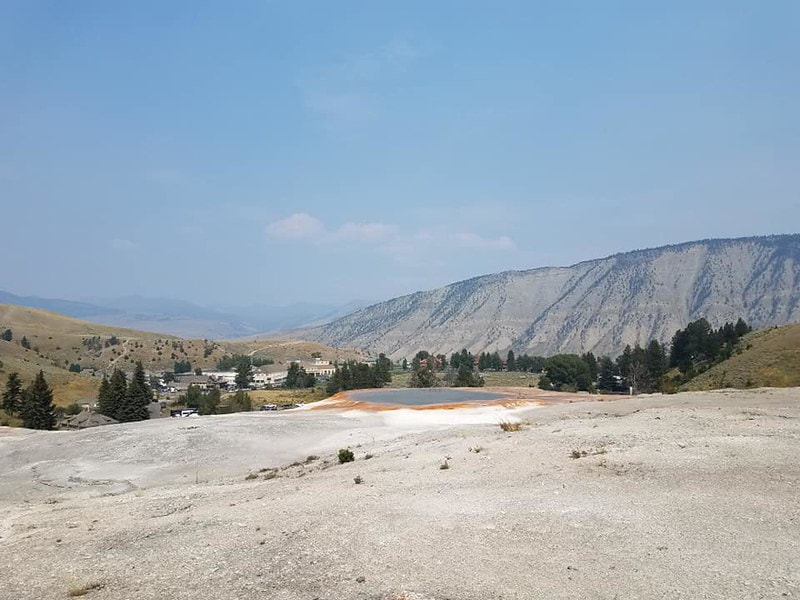