PAUL ACROSS AMERICA
US Route 165 runs from Little Rock, Arkansas, to southeastern parts of the state, and then onto Louisiana, where the route cuts from northeast to southwest across that state.  The northern end of US Route 165 is at US Route 70 in Little Rock, and from there US Route 165 mainly just heads east to Stuttgart, Arkansas.  It isn't until Stuttgart that Arkansas begins to head southerly as the easternmost longitudinal (north-south) route in the state.  At Dumas, Arkansas, US Route 165 trades places with US Route 65, with US Route 65 taking over as the easternmost route.  US Route 165 starts to have a westerly component to its southerly motion, and it passes through Monroe and Alexandria in Louisiana.  Finally, US Route 165 meets its end, barely getting past Interstate 10, at US Route 90, in a town called Iowa, in southwestern Louisiana. 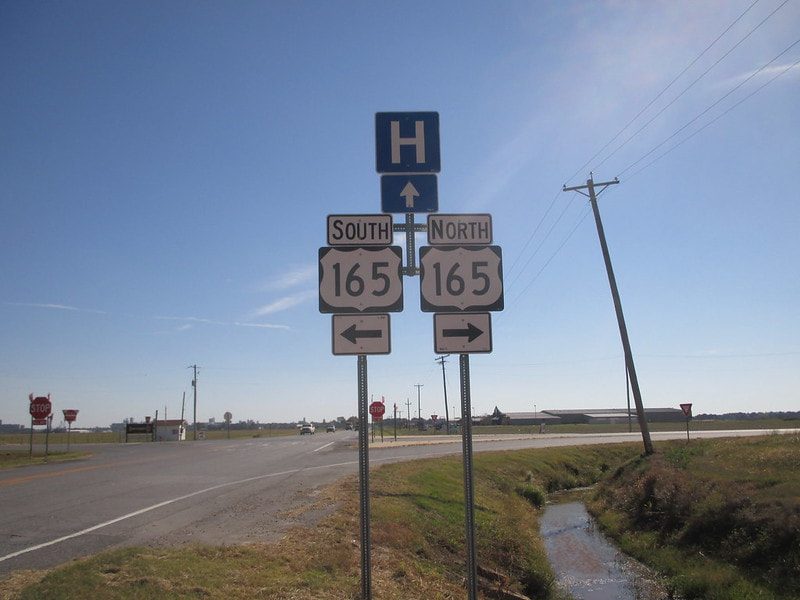 My photo of US Route 165 comes from the highway's junction with US Route 63 on the south side of Stuttgart, Arkansas.  This was along my way home from the first Gulf Coast excursion in October 2014.  The aperture, and the traffic reading the sign, faces south; the sign assembly faces north down US Route 63.  US Route 165 is just west of its turn toward the south, at the location of this photo.  I took this photo before I became a stickler for taking photos that face south, because that would have proven to provide a better lighting situation.
Back to the nationwide main page.
Back to the main page.