PAUL ACROSS AMERICA
Interstate 29 hugs the eastern edge of the Dakotas, the western edge of Iowa, and the western edge of Missouri's northern half, ending in Kansas City.  As you'd expect from an odd-numbered Interstate highway, Interstate 29 runs north-south.  The northern end is the Canadian border crossing to Manitoba Provincial Highway 75, the main route from the international border north to Winnipeg, Manitoba.  From that border crossing at Pembina, North Dakota, Interstate 29 heads south along the Red River, which forms the eastern border of North Dakota, serving Grand Forks and Fargo. In South Dakota, Interstate 29 continues southerly along the eastern reaches of that state, serving Sioux Falls, the largest city in South Dakota. Interstate 29 passes out of the southeastern tip of South Dakota, into Sioux City, Iowa.  For the remainder of its journey south, Interstate 29 runs along the east side of the Missouri River; thus, it serves the important cities established along the River, including Sioux City, Omaha, St. Joseph, and Kansas City.  Yes, Interstate 29 is an important route to Omaha, Nebraska, even though the highway never enters Nebraska! The southernmost segment of Interstate 29 is concurrent with Interstate 35, so it can reach downtown Kansas City, Missouri. The exact end is at the northeast corner of the square of freeways surrounding downtown, at Interstates 70 and 35. 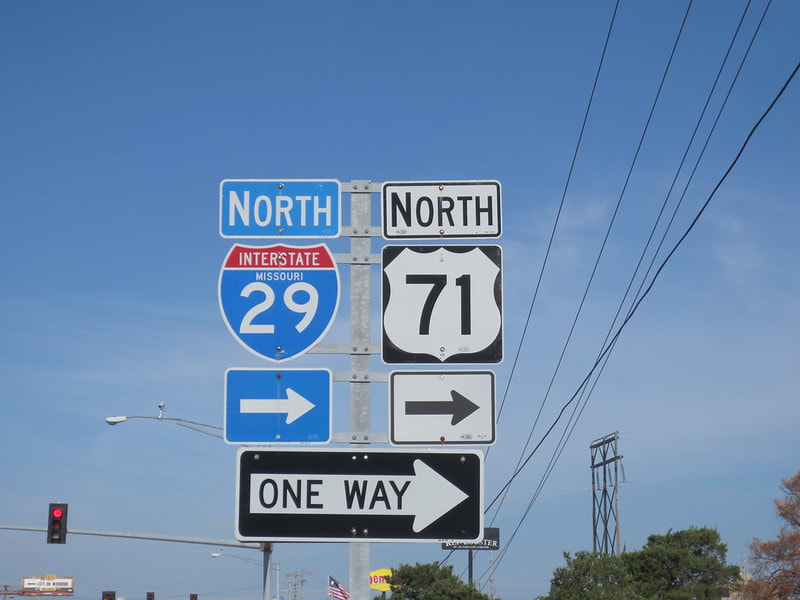 My photo of an Interstate 29 marker comes from Interstate 29's junction with Missouri Route 6 in St. Joseph, Missouri.  Interstate 29 is concurrent with US Route 71 at this point. The sign assembly shows traffic heading westbound on Route 6 the location of the turn to the onramp for Interstate 29 northbound. This photo was taken as part of the trip to the St. Joseph area in May 2014.
Back to the nationwide main page.
Back to the home page.