Iowa Route 136 is a somewhat L-shaped highway in eastern Iowa.  The northwestern end is in Dyersville, at the interchange along US Route 20 where US Route 52 splits from the eastern leg of US Route 20 to head north.  From that interchange, Iowa Route 136 heads south through Wyoming to Oxford Junction, where the route turns easterly.  The eastern half of the east-west portion winds through a lot of curves before ending in Clinton, Iowa.  A bridge across the Mississippi River links Clinton to Illinois as it becomes Illinois Route 136. 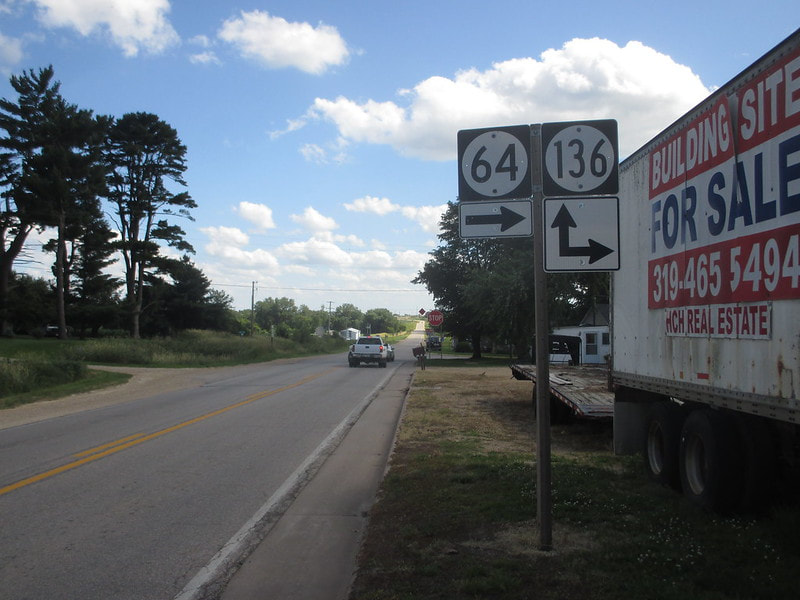 My photo of a route marker for Iowa Route 136 is a north-facing guide marker on the east side of Wyoming, Iowa.  Iowa Route 64's westward journey is interrupted by a curve to the south, leading to the junction seen in the background of this photo.  The sign assembly depicted shows traffic on Iowa Route 64 what their options are.  Continuing on Iowa Route 64 requires a turn to the right, and Iowa Route 136 forms a concurrency with Iowa Route 64 starting at this point.  I took this photo on July 1, 2017, at the latter end of my trip across eastern Iowa.
Back to the Iowa main page.
Back to the home page.