PAUL ACROSS AMERICA
Interstate 71 runs northeast-southwest, connecting the three big cities in Ohio starting with "C", with an extension southwest to Louisville, Kentucky.  The highway runs alongside US Route 42's entire length, except near Columbus, where US Route 42 runs outward around the west side of town.  The northeastern end is at Interstate 90 alongside downtown Cleveland.  Interstate 71 heads southwest from Cleveland through Columbus to Cincinnati, where it crosses the Ohio River into Kentucky, using the same bridge as Interstate 75.  Nearly 20 miles south of Louisville, at Walton, Kentucky, Interstate 71 splits from Interstate 75 to head southwest, through areas just southeast of the Ohio River. The end of Interstate 71's journey occurs in downtown Louisville, Kentucky, at a complex interchange connecting with Interstate 64 and Interstate 65. Many Interstates were built alongside older US highways; the corridor largely shared by Interstate 71 and US Route 42 marks a rare instance of an even-numbered route twinning with an odd-numbered route.  The corridor is angled so perfectly southwesterly that it's hard to decide if a route using the corridor should get an odd number or an even one. 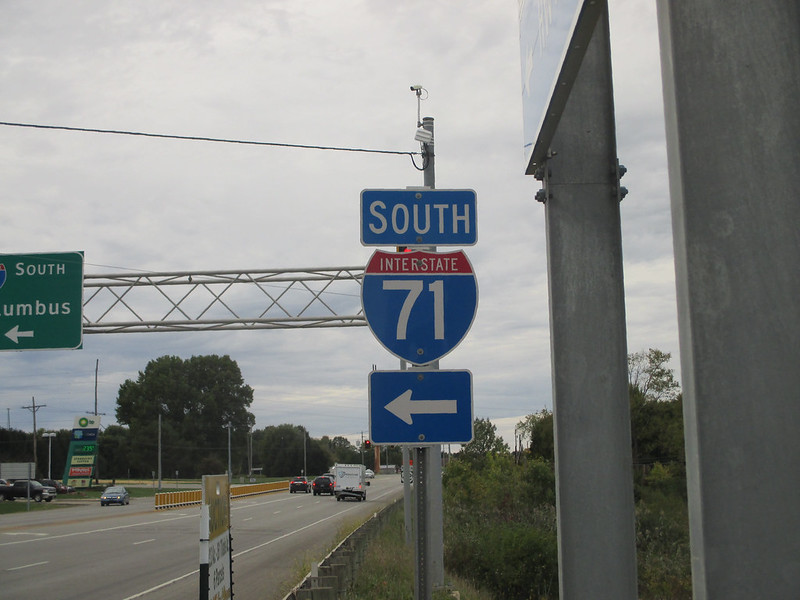 My photo for Interstate 71 comes from its interchange with US Route 250 in Ashland, Ohio. The route marker shown in the photo faces east along US Route 250, showing westbound traffic where to find the onramp to Interstate 71 southbound.  This is on the west side of the interchange. I took this picture during an early part of the trip to the northeastern states, which occurred in October, 2015.
Back to the nationwide main page.
Back to the home page.