PAUL ACROSS AMERICA
US Route 52 is perhaps the most cited example of a diagonal US highway in the United States of America, running from North Dakota's border with Canada south and east to the coast of South Carolina.  At a town called Portal, North Dakota, US Route 52 gets its start at a Canadian border crossing to and from southeastern Saskatchewan. From there, it cuts southeast through Minot to Jamestown, where it joins Interstate 94 all the way east to St. Paul, Minnesota.  US Route 52 is useful in southeastern Minnesota for its ability to connect the Twin Cities with Rochester, Minnesota.  US Route 52 continues southeast beyond Rochester to northeastern Iowa, including Dubuque, rural northern Illinois, and Joliet in Illinois.  US Route 52 cuts south from Joliet and east into Indiana, passing through Lafayette.  US Route 52 follows freeways from Lafayette through the Indianapolis area, and then it cuts away from the freeways to head for Cincinnati.  After Cincinnati, US Route 52 forms a scenic route along the north banks of the Ohio River; this is the segment that gives US Route 52 its number, as it's situated between US Routes 50 and 60. (it's impossible to give a diagonal route a number representative of the entire highway's character).  US Route 52 turns from the north bank of the Ohio River through Huntington, West Virginia, and hugs the southwestern edge of West Virginia.  Then, in western Virginia, central North Carolina, and eastern South Carolina, US Route 52 runs mainly southward to end in Charleston, South Carolina.  The southernmost segment of US Route 52 is concurrent with US Route 78, and both routes end together at US Route 17. 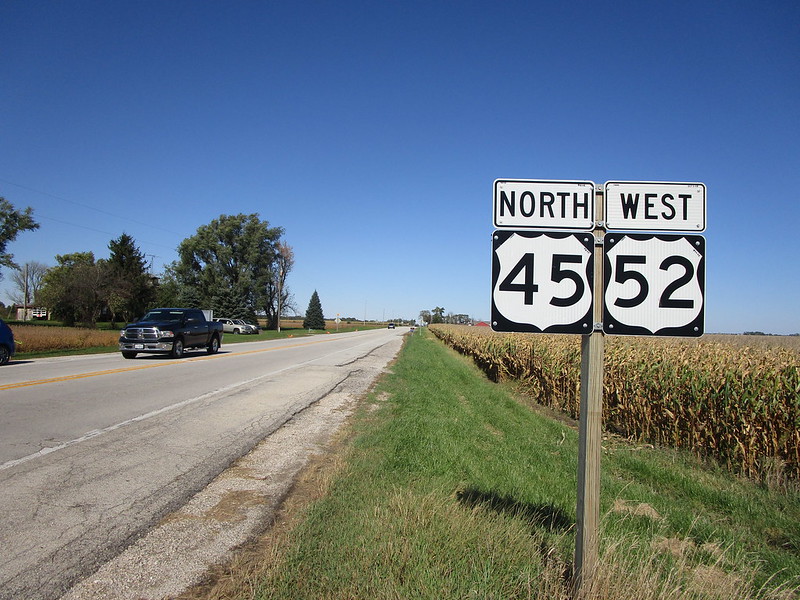 My photo for US Route 52 was taken at the southern end of its concurrency with US Route 45, in rural Iroquois County, Illinois.  Taking this photo was a serendipitous decision citing clean signs and great lighting, along a short trip driving around Illinois with my friend in October 2019.  We decided to clinch Illinois 49 before I showed hum my alma mater, the University of Illinois at Urbana-Champaign.  We stopped to see the white squirrels of Olney on this little trip, too.  The sign assembly depicted faces south at the intersection where US Route 45 splits to the west, US Route 52 splits to the east, and Illinois 49 continues to the south in the wake of both highways.
Back to the nationwide main page.
Back to the home page.