PAUL ACROSS AMERICA
US Route 18 runs from Milwaukee, Wisconsin, west across northern Iowa and southern South Dakota to end in southeastern Wyoming, intercepted by Interstate 25 on the way to Casper.  The eastern end is in downtown Milwaukee, where no north-south surface route with a US designation exists to catch it; thus, the eastern end was allowed to occur at Wisconsin Highway 32.  US Route 18 heads west out of Milwaukee, paralleling Interstate 94 to Madison, where it becomes part of that city's Beltline highway.  US Route 18 splits from Madison's Beltline to divert a little southwesterly before continuing west to Prairie du Chien, where it crosses the Mississippi River into Iowa.  US Route 18 forms the northernmost US highway that crosses the width of Iowa, across Iowa's second row of counties from the state's northern border. (Iowa Route 9 traverses the northernmost row of counties.)  US Route 18 moves on from Iowa to traverse rural areas in southern South Dakota, spanning the entire state.  The last state entered by US Route 18 is Wyoming, where it joins US Route 85 south to US Route 20 west.  US Route 18's final stretch is that concurrency with US Route 20, ending at Interstate 25.  Though US Route 20 continues by joining Interstate 25 north, US Route 18 does not. 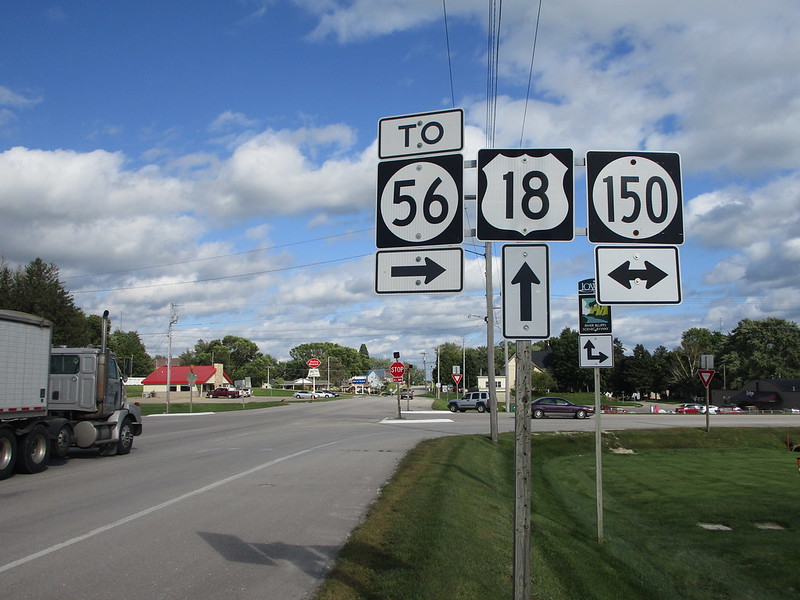 I had to get one US Route shield from Iowa at some point, to show off their unique refusal to use a font series wider than Series C. My photo for US Route 18 comes from West Union, Iowa, at the intersection with Iowa State Route 150. The sign assembly shown faces west for eastbound traffic reaching the intersection. I was driving across northern Iowa, routesnapping Iowa on a state level in September 2019, when taking this photo.
Back to the nationwide main page.
Back to the home page.