PAUL ACROSS AMERICA
Interstate 57 runs south-southwest from Chicago through the eastern and southern parts of Illinois, bending westerly into southeastern Missouri for a short distance to join Interstate 55.  Interstate 57 forms the better part of a freeway corridor between Chicago, Illinois, and Memphis, Tennessee, and as such, both cities are used as control cities on signage along the route.  Though Interstate 55 serves both Chicago and Memphis, that highway makes an exaggerated detour to the west so it can reach St. Louis, Missouri; thus, a more direct connection was warranted. That's where Interstate 57 comes in; it's a more direct alternate of Interstate 55! Cities served by Interstate 57 include Champaign, Illinois; Effingham, Illinois; Mount Vernon, Illinois; Marion, Illinois; and Charleston, Missouri.  The northern end in Chicago is at Interstate 94 on the south side of town.  From there to Effingham, Interstate 57 is closely mirrored by the path of US Route 45.  From Effingham to Cairo, at Illinois's southern tip, Illinois Route 37 follows closely alongside Interstate 57.  The Interstate's border crossing out of Illinois is across the Mississippi River into Missouri, though the Ohio River and Kentucky are close by.  The southwestern end at Interstate 55 is near Sikeston, Missouri; the highway continues west as part of US Route 60. 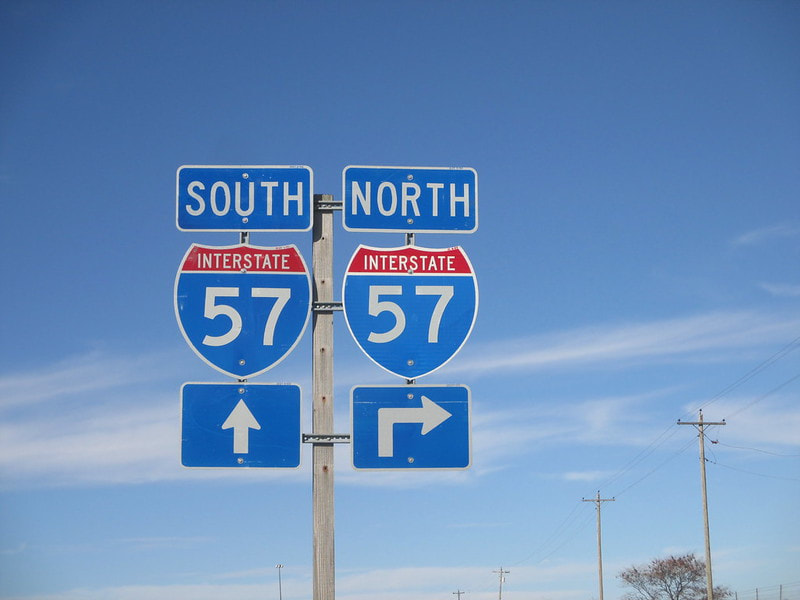 My photo of Interstate 57 markers comes from the southern interchange of Mattoon, where US Route 45 and Illinois Route 121 run concurrently north-south under a diagonal piece of the Interstate. The sign assembly depicted faces south, just south of the northeasterly-flowing onramp to Interstate 57 north. This photo was taken on an early part of the first trip to the Gulf Coast, in October 2014.
Back to the nationwide main page.
Back to the home page.