PAUL ACROSS AMERICA
US Route 9 is a best friend to the Hudson River Valley in New York, the New York metroplex, the Jersey Shore, and southern Delaware.  The northern end converges with Interstate 87 just south of the Canadian border, so that traffic on both routes can cross into Quebec and continue toward Montreal.  This northern end is near Champlain, New York.  From there, US Route 9 heads south through the rest of New York, following closely alongside Interstate 87.  At Albany, the Hudson River emerges from the Adirondacks, and it hugs the corridor traversed by US Route 9 into New York City.  US Route 9 only grazes the northern end of Manhattan before it turns westerly across the George Washington Bridge, deciding that it will be more useful heading south along US Route 1 through the New Jersey suburbia. As US Route 1 diverts southwesterly toward Philadelphia, US Route 9 decides instead to serve eastern New Jersey. At Tom's River, about in the middle of the state, US Route 9 reaches coastal areas, and US Route 9 continues serving coastal towns all the way to Cape May.  US Route 9 doesn't quit there, though; instead, it boards a ferry across Delaware Bay to the state of Delaware. US Route 9 docks at Lewes, Delaware, and heads southwesterly to Laurel, in the southwestern part of the state.  The southern endpoint sits in Laurel, at US Route 13. US Route 9 is one of two US highways to take a ferry across a body of water (the other is US Route 10). 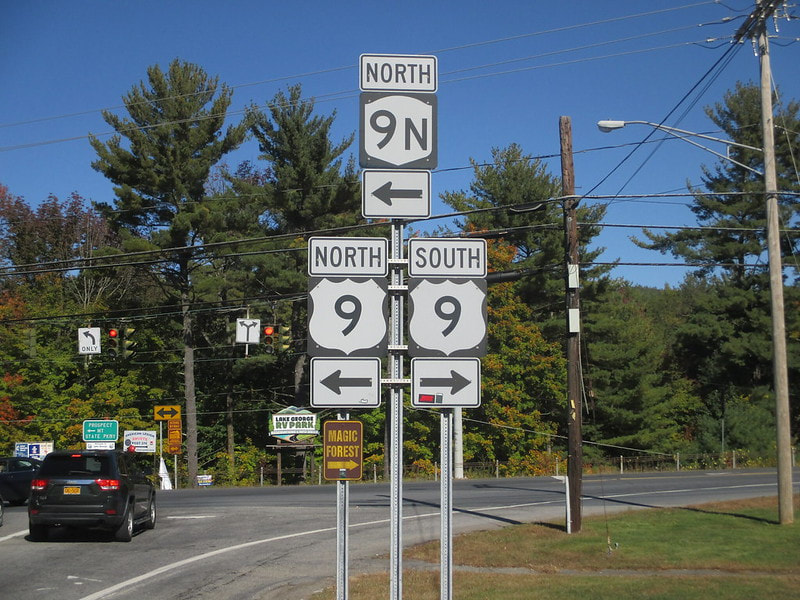 My photo for US Route 9 comes from Lake George, New York, in the southern area of Adirondack Park.  The leg of the Northeast trip bringing me back toward home featured a multi-day stay in the Adirondacks, a region I love to explore.  This photo comes from that leg of the trip, which took place in October 2015.  The sign assembly depicted sits just east of an interchange with Interstate 87 (exit 21), and it faces west toward State Route 9N.
Back to the nationwide main page.
Back to the home page.