PAUL ACROSS AMERICA
US Route 311 is a short fragment of its former self, but in the present day, it runs from Danville, Virginia, southwest to Winston-Salem, North Carolina.  It currently runs northeast-southwest, but this route is the northern half of what used to be a route shaped like a left-oriented chevron (or a less-than sign, "<").  That southern half of the chevron extended to Randleman, North Carolina, but it was deleted in 2018 in favor of the new segment of Interstate 74 that was constructed along the same corridor.  Now. the southwestern end is at an interchange with US Route 52 on the north side of Winston-Salem. The northern end is just barely north of Virginia's southern border, at the business alignment of US Route 58 on the west side of Danville.  A turn to the west along this business alignment will immediately reveal the western end of the business alignment, where it rejoins US Route 58's main highway. 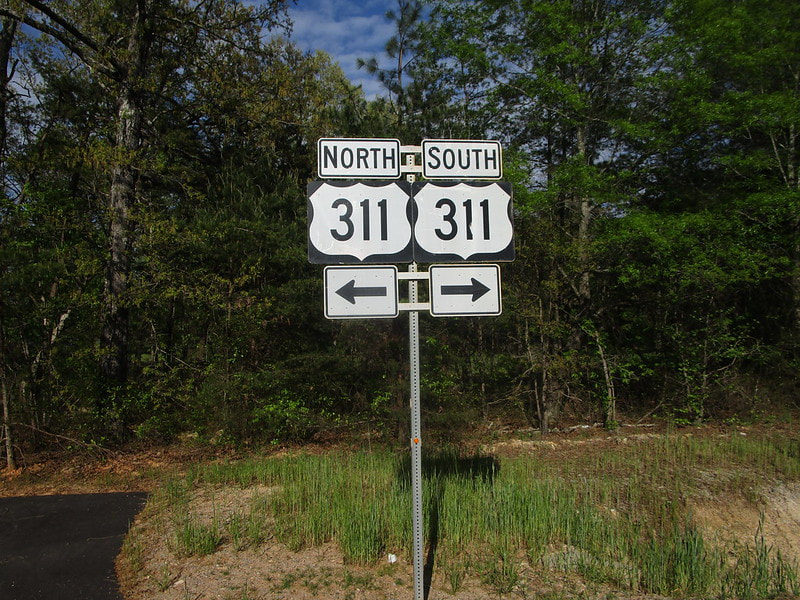 My photo for US Route 311 comes from the first intersection south of its northern end, with a local road in Danville, Virginia.  This pair of guide markers faces west at the T-intersection with this local road. I couldn't find a safe place to pull off the side of the road at US Route 311's northernmost point, the intersection with Business US Route 58.  That's why I tried making a foray to the south, to find a safe place. This photo came from the Virginia trip of April 2021.
Back to the nationwide main page.
Back to the home page.