Iowa Route 58 is a north-south highway in the Waterloo area and points nearby to the south.  It's a two-faced route (can we trust it?) with two separate segments that look and function completely differently. The northern portion is an expressway that also carries Iowa Route 27 and the Avenue of the Saints.  The southern portion is a surface road running due south to hook up with US Route 63 at Hudson.  That junction with US Route 63 in Hudson is the southernmost end of Iowa Route 58.  The northern end is the highway interchange with US Route 218 and Iowa Route 57 on the east end of Cedar Falls.  At that interchange, US Route 218 bends from the north leg of the interchange to the eastern leg into Waterloo; Iowa Route 57 spawns and heads west through Cedar Falls, and Iowa Route 58 occupies the southern leg.  Iowa Route 27 runs north-south through that interchange, and continues north along US Route 218.  Regrettably, even though the northern section of Iowa Route 58 strives to be a freeway, two at-grade intersections with traffic signals interrupt the flow of traffic, at Ridgeway Avenue and Greenhill Avenue. 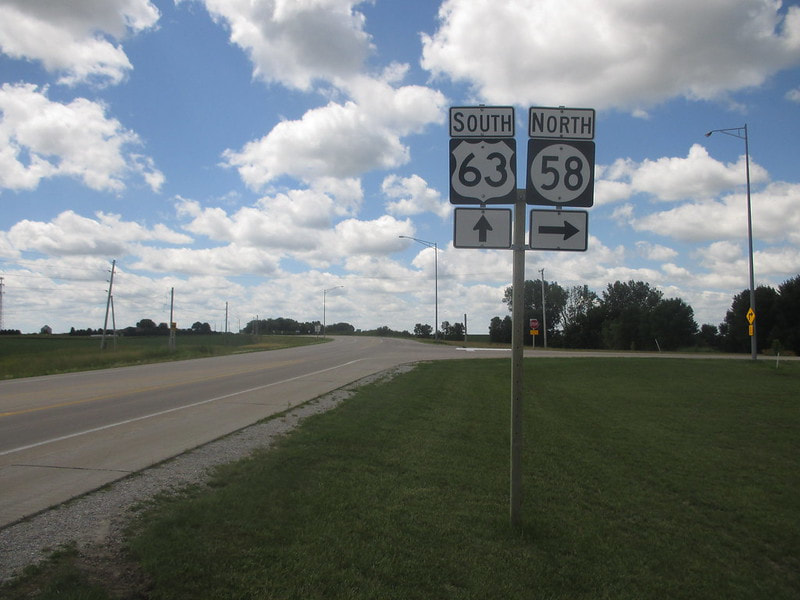 My photo of Iowa Route 58 comes from its southern terminus, at US Route 63 in Hudson.  In the immediate vicinity of this junction, US Route 63 bends from a southwesterly orientation to a southern one, as if to take over for Iowa Route 58 as the north-south highway at this longitude.  The sign assembly depicted faces northeast toward southwesterly traffic along US Route 63, showing that traffic where the turn onto Iowa Route 58 lies. I took this photo on July 1, 2017, during the trip to eastern Iowa.
Back to the Iowa main page.
Back to the home page.