PAUL ACROSS AMERICA
US Route 59 runs north-south through the Great Plains states, from a Canadian border crossing in northwestern Minnesota, south to the Mexican border at Laredo, Texas.  The route begins just north of Lancaster, Minnesota.  From there, US Route 59 heads southerly through mainly rural areas of western Minnesota and western Iowa. After that, US Route 59 pokes into northwestern Missouri until just after St. Joseph, at a bridge over the Missouri River into Atchison, Kansas.  South of Atchison, US Route 59, continues through eastern Kansas and the eastern edge of Oklahoma, until a point three-quarters of the way down that eastern edge.  At that point, US Route 59 jumps east into southwestern Arkansas, joining US Route 71 south to Texarkana.  From Texarkana, US Route 59 enters Texas, cutting south through eastern Texas to Houston, and then diverting southwest through Victoria to end in Laredo.  In Laredo, US Route 59 comes in from the northeast and jumps onto a bypass around the north side of Laredo, culminating in a crossing over the Rio Grande into Mexico. 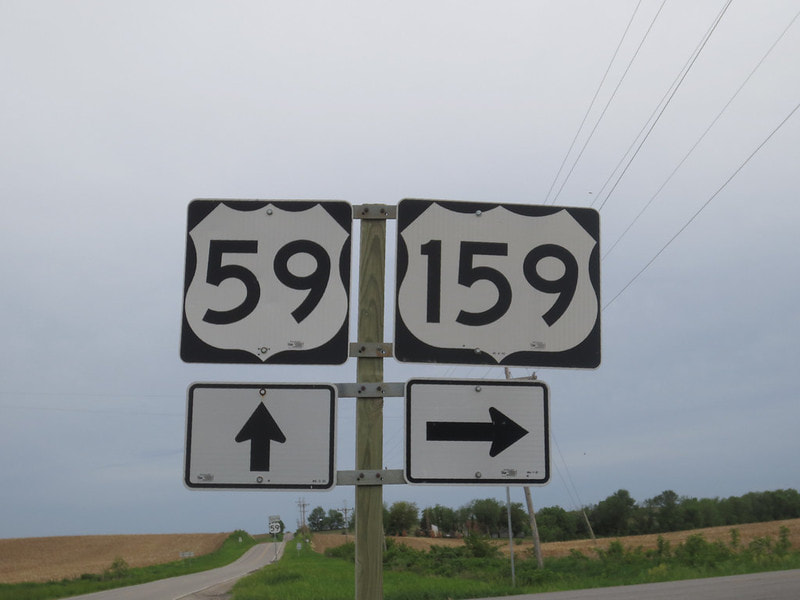 My photo for US Route 59 was taken in May, 2014, at the intersection home to the northeastern end of US Route 159 in northwestern Missouri.  This sign assembly faces north for southbound traffic on US Route 59 looking for the junction with US Route 159.  US Route 59 continues south into the background of this photo toward St. Joseph.  Interstate 29 lies just to the west.  The vicinity around St. Joseph was the destination for my first trip in May 2014 devoted to photographing US Routes and Interstates.
Back to the nationwide main page.
Back to the home page.