Iowa Route 85 is a short east-west route in southern Poweshiek County, connecting Montezuma to Iowa Route 21 near Deep River, Iowa.  The route parallels Interstate 80 by about seven miles to the south, and it's about eight miles in length.  The eastern end is the aforementioned terminus at Iowa Route 21 near Deep River, but the western end has a bit of a complicated story.  About a decade ago, the town of Montezuma decided they wanted domain over their main street, so they could use it for town festivals and events. That main street carried Iowa Route 85, and because it was a state highway, it was under the jurisdiction of IowaDOT. IowaDOT responded to the request by ceding the jurisdiction of the main street to the town.  Now, Montezuma controls the main street within the village limits, meaning that the new western endpoint of Iowa Route 85 is at the eastern boundary of the village.  The former western end of Iowa Route 85 was at US Route 63, at a junction right in Montezuma. 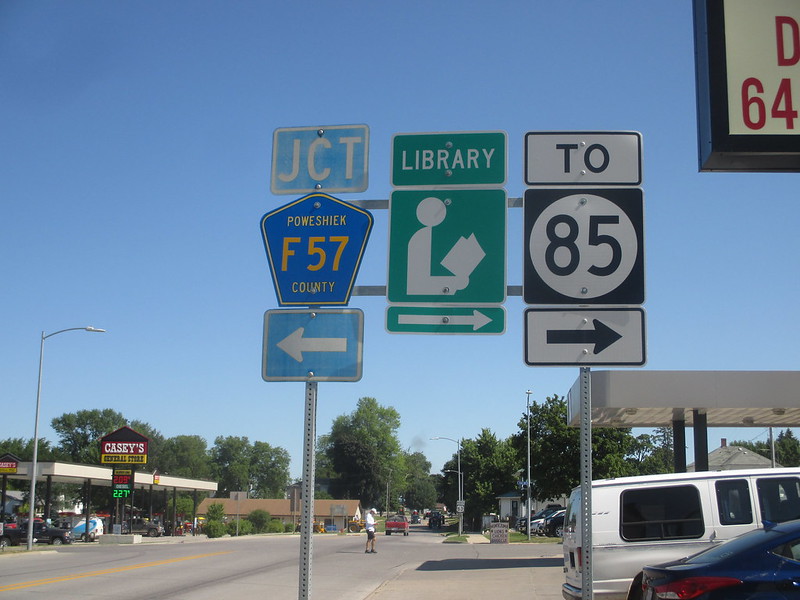 My photo of Iowa Route 85 is along US Route 63 in Montezuma.  As the former western endpoint of Iowa Route 85 was at this intersection with US Route 63, drivers of today on US Route 63 can be confused trying to find Iowa Route 85 since its western end was shifted east. This "To" marker really is needed, as a traveler using a map of Iowa might just notice the town of Montezuma with Iowa Route 85 protruding to the east.  This signage faces south for northbound travelers on US Route 63.  This photo was taken on July 1, 2017, as part of the eastern Iowa trip. Look at that nice new Casey's! Truly we are witnessing a crown jewel of Iowa.
Back to the Iowa main page.
Back to the home page.