PAUL ACROSS AMERICA
US Route 50 runs from Sacramento, California, all the way to Ocean City, Maryland, making it one of the longest US highways.  While many other major US routes have had their corridors largely overlapped by Interstate highways, US Route 50 stays independent for most of its length.  The westernmost bit of US Route 50 is a freeway merges with Interstate 80 at an interchange on the west side of Sacramento, California.  The freeway heads through downtown Sacramento, then becomes a surface highway around the south side of Lake Tahoe.  US Route 50 then connects to Carson City and proceeds through the middle of rural Nevada, where the highway is known as "The Loneliest Road".  In the middle of Utah, US Route 50 joins Interstate 70 east through largely rural areas, until Grand Junction, Colorado.  At that point, US Route 50 continues east across the Colorado Rockies, meeting the Great Plains at the city of Pueblo.  US Route 50 follows its own non-freeway route through Kansas (though US Route 400 comes along for the ride until Dodge City), until Emporia, where it joins Interstate 35 to Interstate 435 and Interstate 470.  In Missouri, US Route 50 splits from Interstate 470 on the south side of the Kansas City area, through Jefferson City almost all of the way to St. Louis.  US Route 50 uses Interstates 44, 270, 255, and 64 to get around the St. Louis area.  US Route 50 continues east across southern Illinois, southern Indiana, Cincinnati, and southern Ohio.  US Route 50 enters West Virginia at Parkersburg, continuing across the northern part of that state and the northern part of Virginia.  US Route 50 works its way through Washington, DC, then extends east from there to Annapolis, Maryland, on a freeway.  US Route 50 crosses the Chesapeake Bay Bridge from Annapolis to eastern Maryland, where US Route 50 bends south to its final east-west stretch.  The final eastern end of US Route 50 sits in Ocean City, Maryland, at no particular designated route. 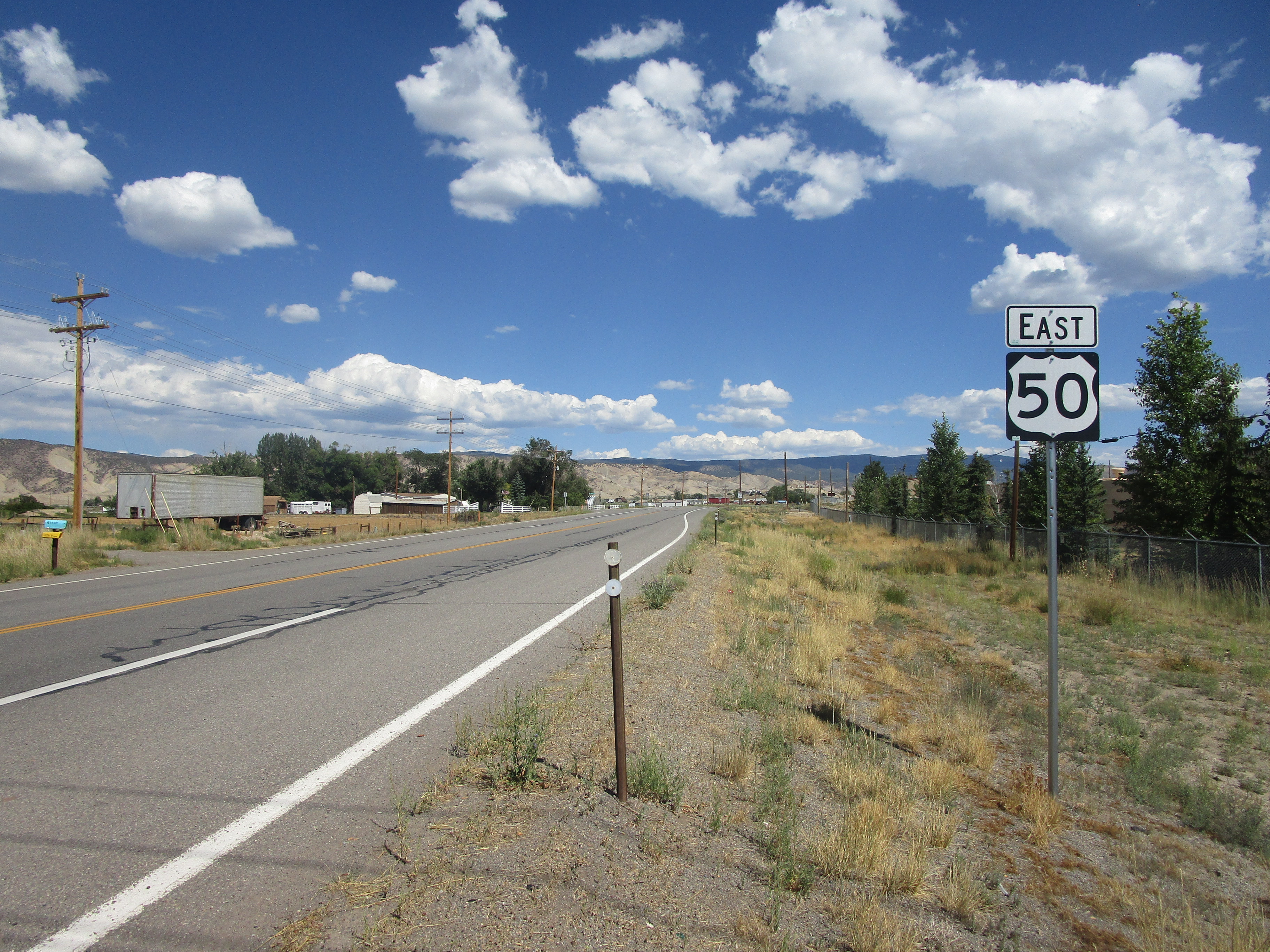 My photo for US Route 50 shows a reassurance marker for travelers leaving Montrose, Colorado, toward the east. Montrose a town in west-central Colorado, where US Route 50 meets the northern end of US Route 550.  This photo was taken at the end of August 2022, during a trip to the four national parks of Colorado.  The entrance to the south rim of Black Canyon of the Gunnison National Park sits east of Montrose, farther into the background of the photo.  Indeed, that's where I was headed when taking this photo!