PAUL ACROSS AMERICA
US Route 93 is a long north-south highway in the western United States, running from the northwestern corner of Montana to Las Vegas, then cutting southeast almost all the way to Phoenix, Arizona.  The northern end is at the Canadian border near Eureka, Montana.  The southern end is at a roundabout with US Route 60 in Wickenburg, Arizona, from which US Route 60 can be followed the rest of the way southeast into Phoenix.  US Route 93 mainly runs through rural and desolate areas in the Great Basin and other nearby arid regions.  It does pass through some significant cities, however, including Missoula, Montana; Twin Falls, Idaho; Las Vegas, Nevada; and Kingman, Arizona.  The section between Phoenix and Las Vegas is a four-lane high-speed highway, and is the fastest and best route between those two cities. 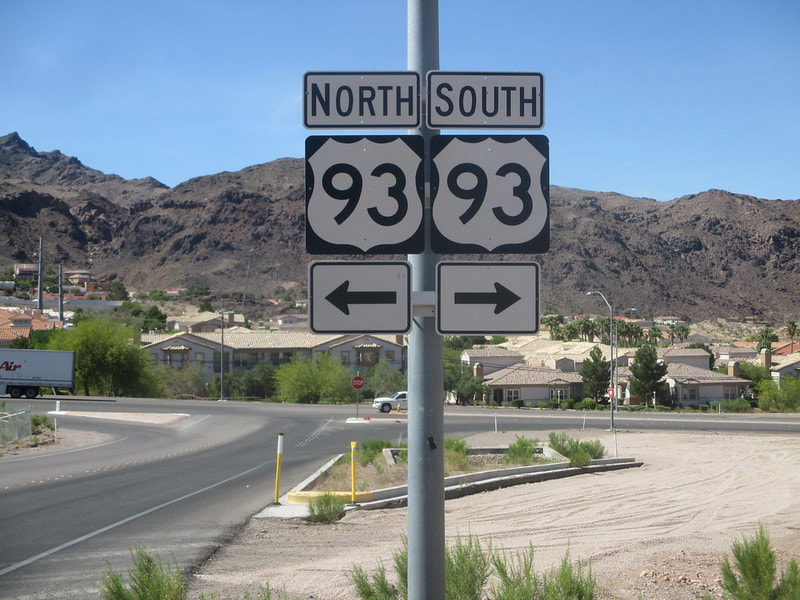 The desert is a pretty sure bet that the lighting for your sign photos will be favorable. That's why it worked out so well getting this US Route 93 sign in Boulder City, Nevada.  This sign assembly in the picture faces south toward the exit of the Nevada Welcome Center, where I stopped to try and get a free map of Nevada for my map collection.  The section of US Route 93 here runs east-west, and has been bypassed by the new construction of Interstate 11, since I snapped this photo.  I had another sign assembly in mind for my photo of US Route 93, but this opportunity for a clean photo just presented itself to me as I visited this welcome center.  This photo was snapped in early May 2017, along the final stretch of my clockwise drive around the Grand Canyon, starting and ending in Las Vegas, Nevada.
​
Back to the nationwide main page, for more US Routes and Interstates!
Back to the home page.