Iowa Route 9 is an important east-west highway across Iowa, spanning the northernmost row of counties in the state.  It runs from South Dakota to Wisconsin, serving as the main east-west route through virtually all of Iowa's northernmost counties.  The western end is actually along the short east-west section of the border between South Dakota and Iowa; northwest of the border crossing, Iowa Route 9 becomes South Dakota Highway 42, a highway bound for Sioux Falls.  The eastern end of Iowa Route 9 is a bridge across the Mississippi River into Wisconsin, where the road becomes Wisconsin Highway 82.  That eastern terminus is at the town of Lansing, Iowa.  Iowa Route 9 connects many of northern Iowa's towns, like Rock Rapids, Estherville, Armstrong, Forest City, Spirit Lake, and Decorah. 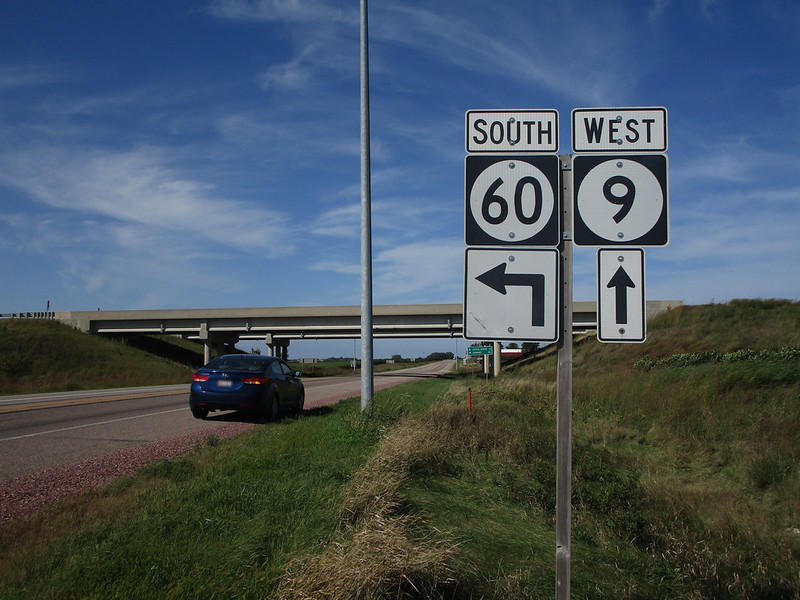 My photo of Iowa Route 9 comes from its junction with the expressway carrying Iowa Route 60, near Sibley, Iowa.  The aperture faced west as this photo was taken, situated in the northeast quadrant of the interchange. The sign assembly notifies westbound traffic on Iowa Route 9 that the turn to the southbound onramp is just ahead, beyond the underpass.  I took this photo in September 2019, as part of the northern Iowa trip.
Back to the Iowa main page.
Back to the home page.