Iowa Highway 44 is an east-west highway in western Iowa, paralleling Interstate 80 to the north.  The eastern end is in Grimes, Iowa, a northwestern suburb of Des Moines.  Iowa Route 141's eastern bend to the south catches Iowa Route 44, cutting the route off and bringing most of its traffic south to Interstates 35 and 80. From that eastern point, Iowa Route 44 heads nearly due west to Harrison County, a county in west-central Iowa along the state's western border (and the Missouri River).  The western terminus is at US Route 30 in eastern Harrison County, just east of Logan.  Iowa Route 44 skewers right through the centers of five consecutive counties along the same row in western Iowa, from Dallas County to Harrison County (though the eastern end barely pokes into Polk County). 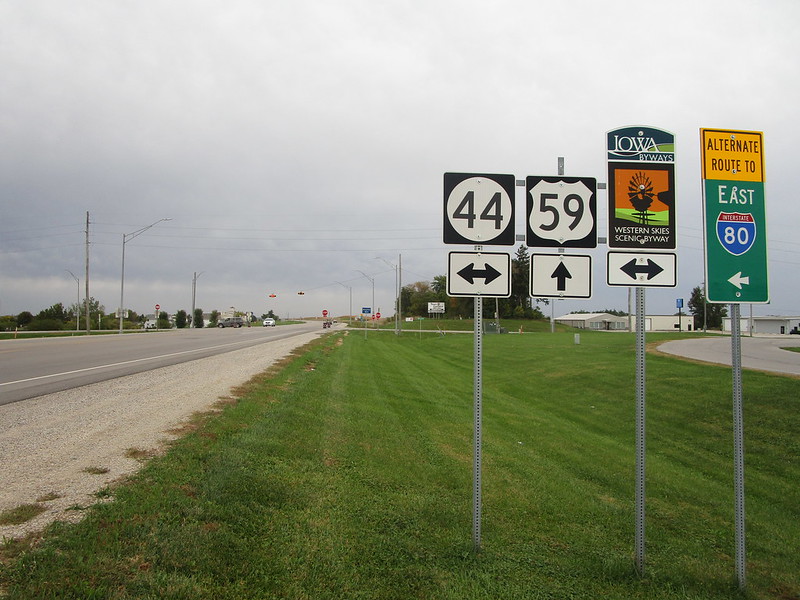 My photo for Iowa Route 44 comes from the assembly facing southbound traffic, at the junction with US Route 59 in Harlan, Iowa.  The signage depicted faces north to cars on US Route 59, telling them that the intersection visible here is with Iowa Route 44.  It's uncommon for me to photograph northward-facing signage while in the northern hemisphere (which I have never left), as a southward-facing aperture leads to backlit photographs when the Sun is positioned to the south.  However, the thoroughly overcast skies, like those seen here, are a great equalizer for the amount of brightness seen above.  The trip across southern and western Iowa in October 2021 gave the opportunity to take this photo.
Back to the Iowa main page.
Back to the home page.