PAUL ACROSS AMERICA
Interstate 81 runs from the Canadian border near the northeast corner of Lake Ontario, south through upstate New York to Scranton, Pennsylvania, where the highway turns southwesterly along the east flank of the Appalachians until northeastern Tennessee.  Ontario Highway 137 descends southerly from Ontario Highway 401, the foremost freeway of the province, to a border crossing just a few miles to the south, on the Thousand Islands of Lake Ontario.  That border crossing is the northern end of Interstate 81. From there, Interstate 81 heads south through Watertown, Syracuse, and Binghamton in Upstate New York.  It heads south to the vicinity of Scranton and Wilkes-Barre in Pennsylvania, where Interstate 81 bends toward the southwest.  Interstate 81 passes through Harrisburg before exiting Pennsylvania.  Next, it spends eleven miles in the chewed-up shred of western Maryland, and twenty-five miles in the eastern arm of West Virginia. Then, it's onward to Winchester, Virginia.  In Virginia, Interstate 81 generally flanks the eastern edge of the Appalachians, passing through Staunton, Roanoke, and Wytheville to Bristol, a city with parts in both southwestern Virginia and northeastern Tennessee.  Interstate 81 continues through the Tri-Cities area of northeastern Tennessee, ending at Interstate 40 near Dandridge, east of Knoxville, Tennessee. The entire Interstate 81 corridor runs alongside the previously-established route of US Route 11, up until the end of that Interstate.  The US Route 11 continues southwest, with Interstate 59 and portions of Interstate 75 hanging on to the remainder of US Route 11's length. 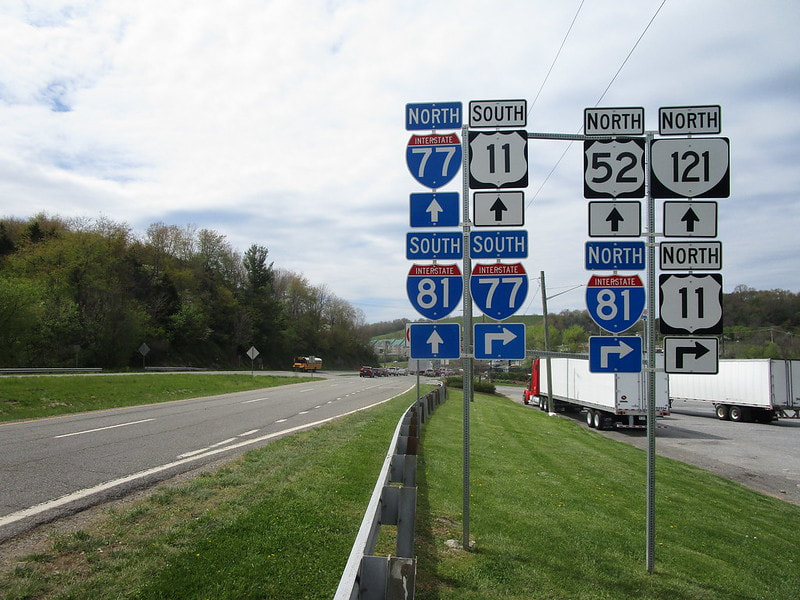