Acadia National Park is Maine's National Park, with breathtaking views provided by rocky shores and anomalous mountains rising from the Atlantic Ocean.  The park is situated on Mount Desert Island, an island just barely off the coast of the Maine mainland. Geographical wonders abound, including an anomalous sandy Maine beach, and a pluton of igneous volcanic rock pushing upward into the air, exposed for all to see.  The largest portion of this pluton is Cadillac Mountain, a mountain that seems to come out of nowhere.  Cadillac Mountain is one of the easiest mountains in a national park to climb, because you can do it by car.  Driving to the top of Cadillac Mountain led to one of the most breathtaking views I've ever seen, as my periphery included sights of fall foliage, sunsets, granite mountains, forests, cruise ships, the Atlantic Ocean, and the town of Bar Harbor below; this view occurred on an October evening.  Cadillac Mountain is not the only mountain in the park, as other mountains like Mount Desert are situated, ready to be climbed.  Even away from the mountains, the sight of the colorful rocky shoreline is something to behold.  The large rock formations dotting the shoreline make for a fun playground of rock-hopping.  The nearby town of Bar Harbor offers a lot of shopping and services--this sets Acadia apart from other National Parks that are nowhere near any useful services.  If lighthouses are to your interest, the Bass Harbor Head Lighthouse may delight you on your visit.  Camping and boating opportunities abound, and lots of lodging is available nearby, in Bar Harbor and Ellsworth.

Our visit to Acadia National Park was a two-day visit, on the way home from our drive to Nova Scotia.  The very earliest part of October, 2019, was the timing of our trip.

Photos at Acadia National Park will be divided into three sections.  The first part corresponds to our first day, exploring the Otter Cliff area and the coastal ring road running along the rocky shores in the southeastern part of Mount Desert Island.  The second part contains photos from our highly fun hike up Mount Desert on the second morning, and the last part shows photos from atop Cadillac Mountain.

The first photo I'll show is of the Otter Cliff area.  It isn't the first area I photographed chronologically, but it deserves to go first because it provides a good example of what the area looks like. 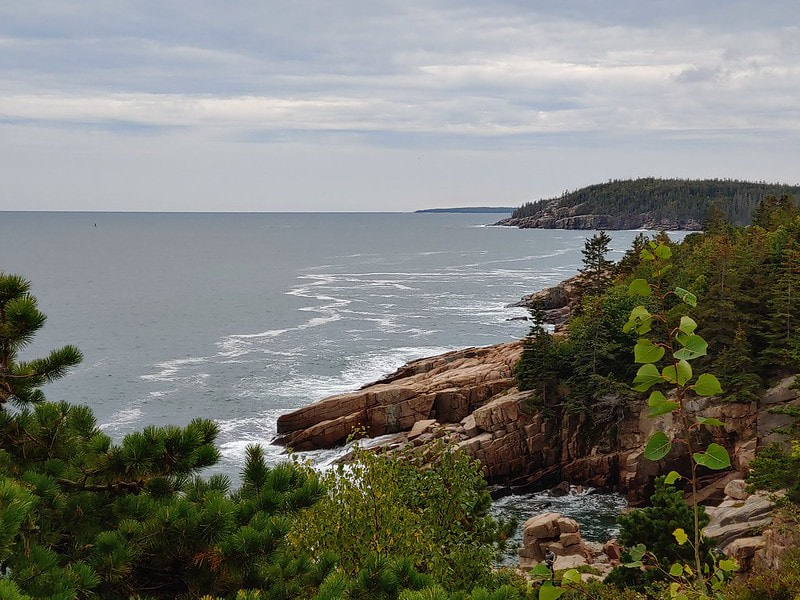 Here we have a beautiful example of what to expect from the coastlines of Acadia.  Note the caramel-colored rocky outcroppings, stratified along an anomalous angle, in a way characteristic of the park.  Scenes like this prove that the American coastlines with high-perched cliffside views are not exclusive to the West Coast!  And it gets even better heading north into portions of Canada.  This next photo shows more cliffside scenes along the ocean: 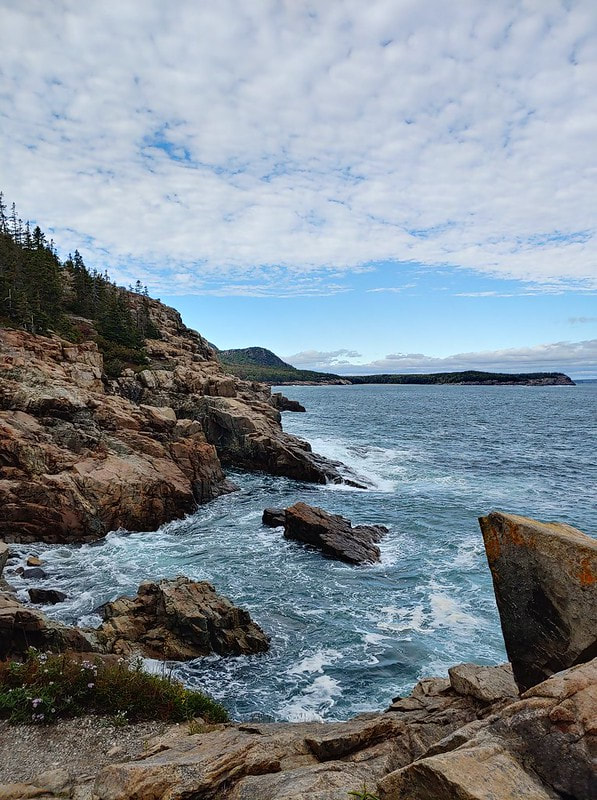 Walking farther west along the southern shore of the island brings you to an inlet called Otter Cove.  The cyclical park road runs one way clockwise, so the southern coastal views from the road comes from the westbound part of the circuit.  The Otter Cliff trail runs alongside the road.  Pictures like the one below hopefully convey the amount of opportunities to jump around on a playground of rocks. 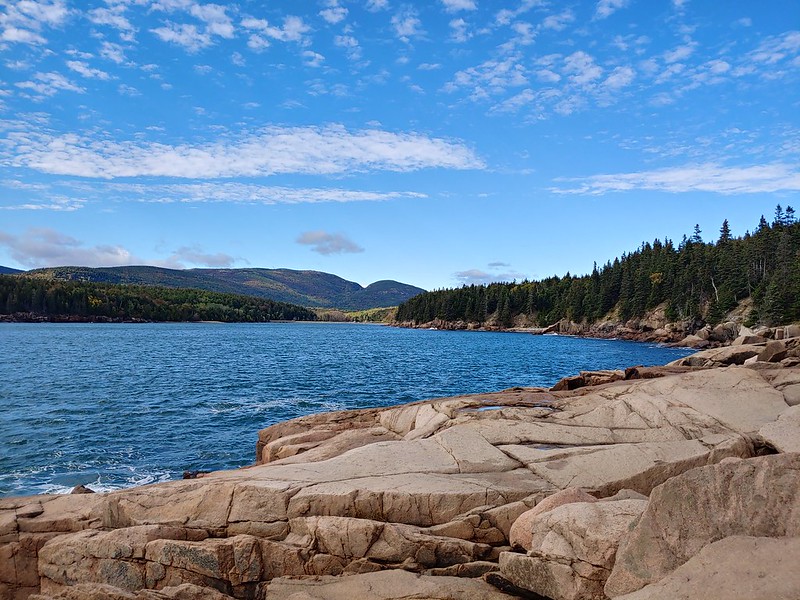 Now that I've shown you some good examples of Acadia National Park's coastline, let me show you something completely different.  Maine is not known for its beaches, but that's why the Sand Beach of Acadia National Park is such a big deal.  While it may not be so unusual in other Atlantic coastal states, the sandy beach shown below is highly disruptive to one's expectations for Maine.  The first picture taken chronologically is the next one, and I avoided listing it first because it's not representative of the park as a whole. It seems people are somehow naturally drawn to beaches, as getting people out of the shot was very difficult when trying to snap this photo: 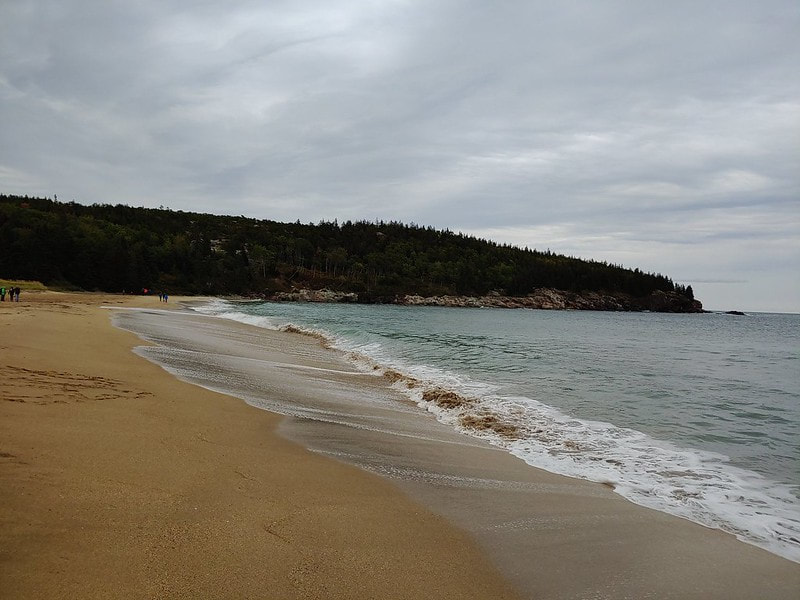 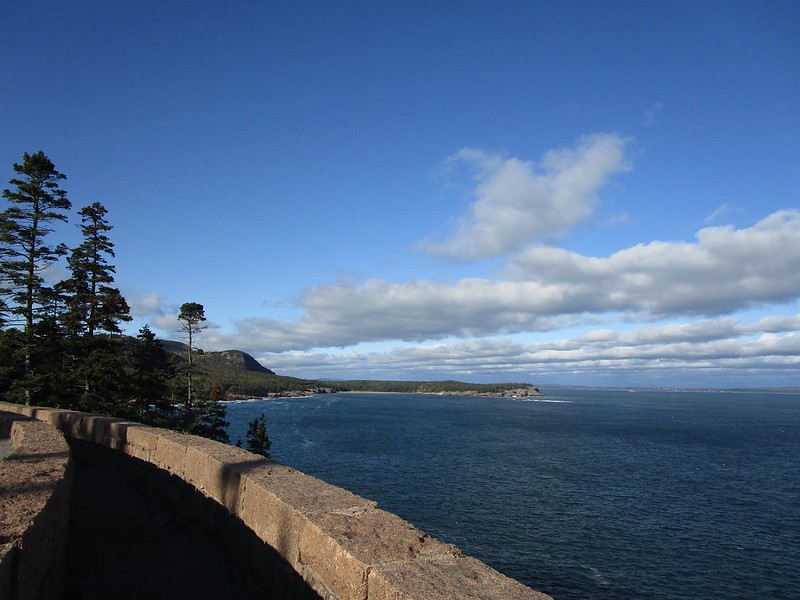 Here's a picture of some of the rock formations you can climb on along the coast along Otter Cove, with my wife to provide scale: 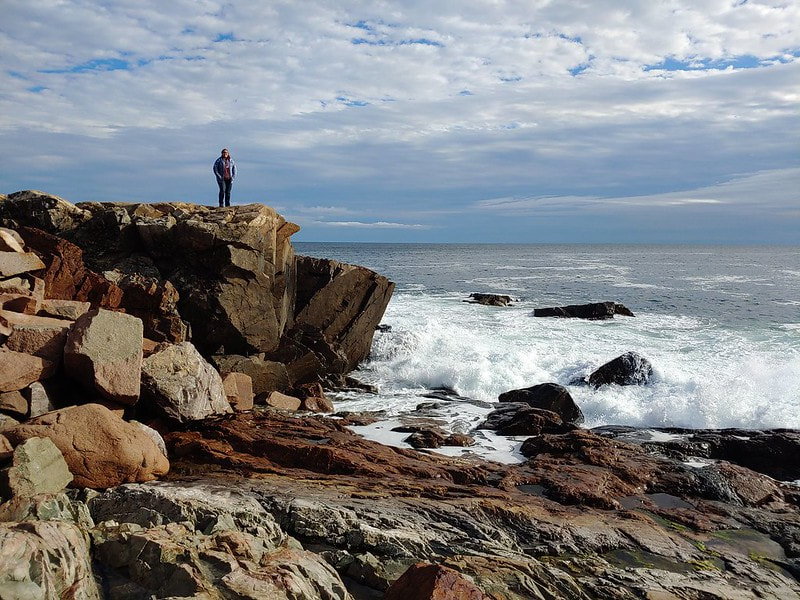 Part 2: The hike up Mount Desert.

Mount Desert Island does serve as the home as its titular mountain, Mount Desert.  Acadia is home to an array of different mountains to climb; we chose this one according to the advertised difficulty and the advertised timeframe of hiking it.  We hiked the circuitous trail up and down Mount Desert in a counterclockwise direction, because mild scrambling sounded nicer as an ascent then a descent (my wife is somewhat afraid of heights, and making her look down in the scrambling portions sounded like a worse plan).

Before the hike up Mount Desert, we made a quick morning stop to see the Bass Harbor Head Lighthouse.  This is at the southwestern end of the island. 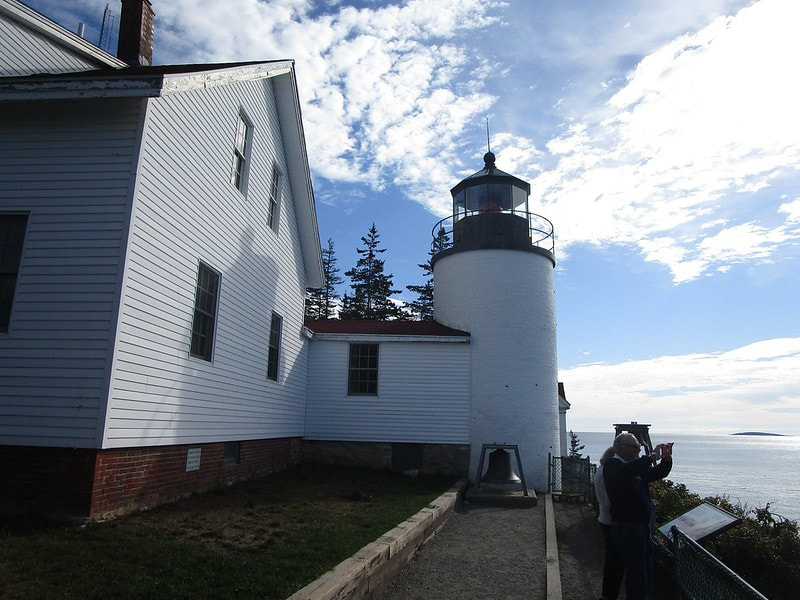 Then we actually started the hike up Mount Desert. From the trailhead along Route 102, we started this hike by heading east to Somes Sound, a northward-protruding ocean inlet.  Alongside the Sound, the trail meets a junction where we turned left, toward the north.  But at that junction, I decided to embark on a little side-quest looking for the "Man of War Brook," which I assumed was some kind of stream.  A little label of text on Google Maps was all the indication that some stream was there, and noting the sharp drop into the ocean at this location, I guessed that I might find a little waterfall or something here.  This tiny little chute of water is what I found, climbing my way down to the Sound: 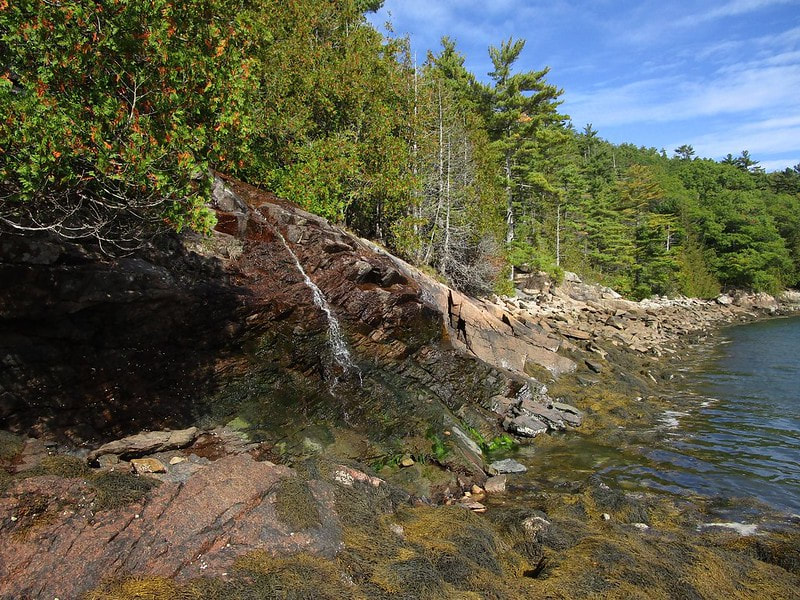 When we reached the trail junction and turned northerly, that's when the real upward climb began.  The trail traversed terrain that was largely bedrock, which reminded me of some trails in the red rock of Utah.  Bedrock leaves officials with few options of how to mark trails. Small swatches of blue paint were the only things marking the trail: 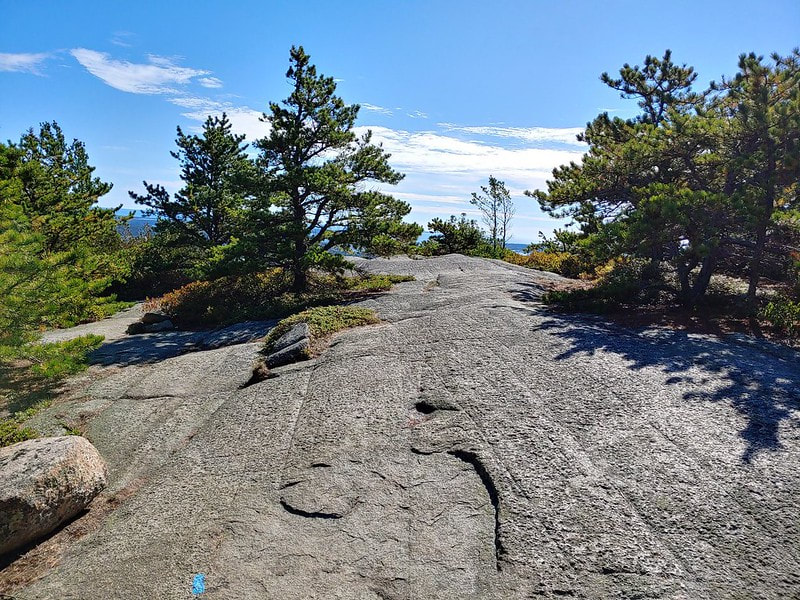 Hiking the trail required some mild scrambling, something not highly familiar to us.  But a little bit of bonafide climbing never hurt anyone!  I welcome the challenge to involve my arms and hands in the action, up to a certain extent.  (Nothing that requires harnesses or ropes, please.)  The steep upward climbs really needed the blue trail markers to eliminate confusion.  "Yes, we really do want you to climb up this wall."  Look at this photo below, though; doesn't this look fun? There's enough terracing to make it easy for the average person to climb, I think. 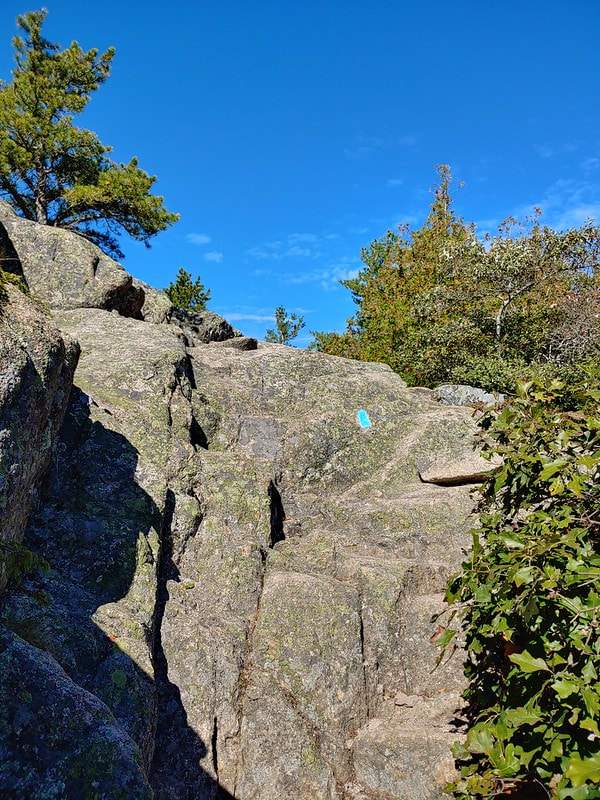 In the next photo is my wife, calculating her next move. Actually, I think we were trying to figure out if this was the correct way to go or not.  Hikers really would prefer not to climb something unless it was part of the trail, so providing clear trail markings really is a must for the scrambling portions. 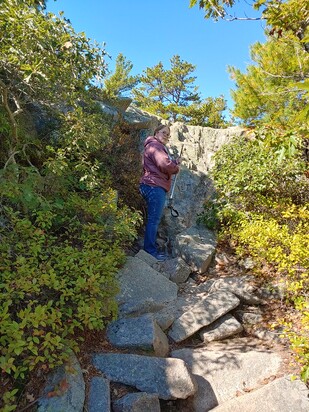 The great thing about hiking upward, though, is that the views get better and better as you go up.  In our case, the views behind us, oriented toward the ocean, really got increasingly beautiful: 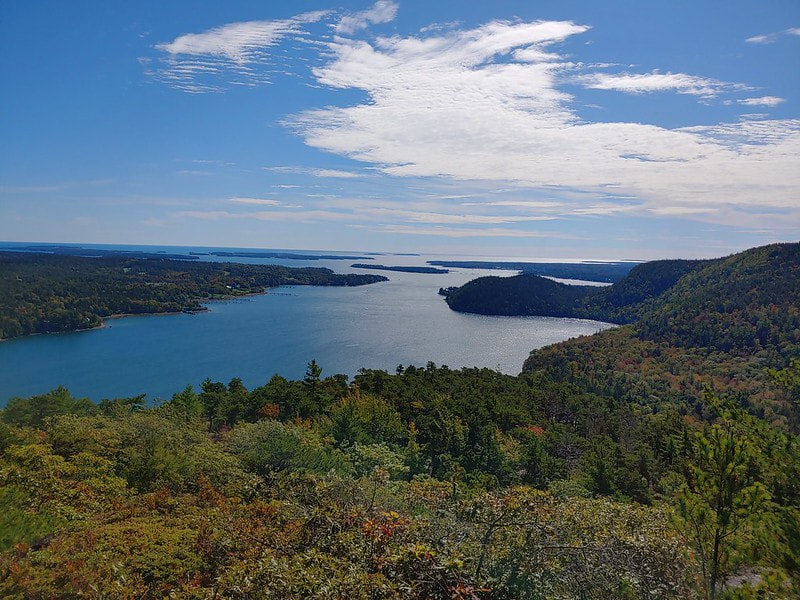 Hoping to get back to the car around noon, we didn't actually get to the mountain's summit until about noon.  But we made it!  Getting back to the car didn't take very long, though, as the summit was about three-quarters of the way through our circuitous route. 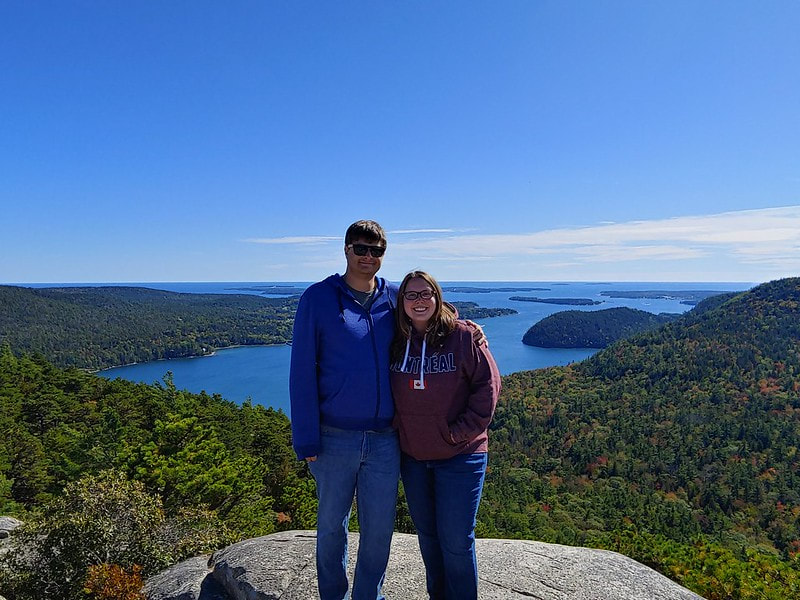 Here's a view of the trail hiking back down, facing westward: 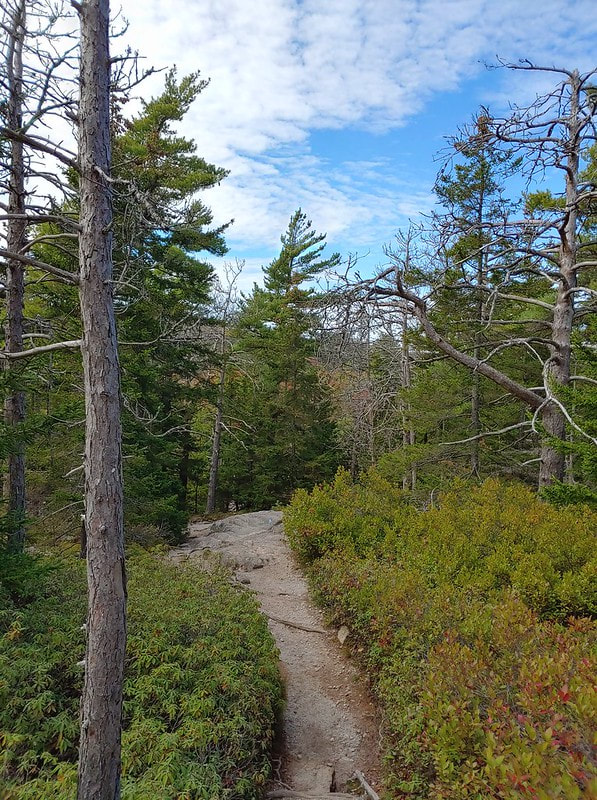 The lunch that followed this hike was at Atlantic Brewing Company, which serves barbecue and a delicious blueberry-flavored beer.  That brings us to the last set of photos.

​Here are a few shots taken from positions on top of Cadillac Mountain.  You can drive up the mountain, so people of all abilities can enjoy these views. People tend to flock to the mountain around sunset, when the views are the most colorful.  The day I went up the mountain at sunset didn't offer views as colorful as usual, though, because of the overcast sky.  As I said before, Cadillac Mountain is one of the best examples of a pluton in the eastern United States.  A pluton is an intrusive body of igneous rock that formed by magma that hardened and got pushed up above the earth's surface.  In other words, it's rock that belongs deeper into the earth, but it got pushed up for all of us to see, or even climb on top of it! 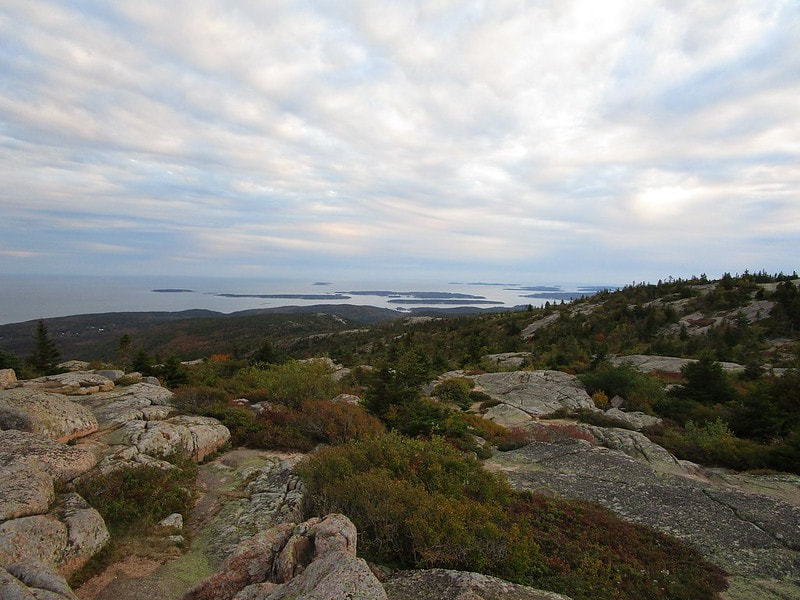 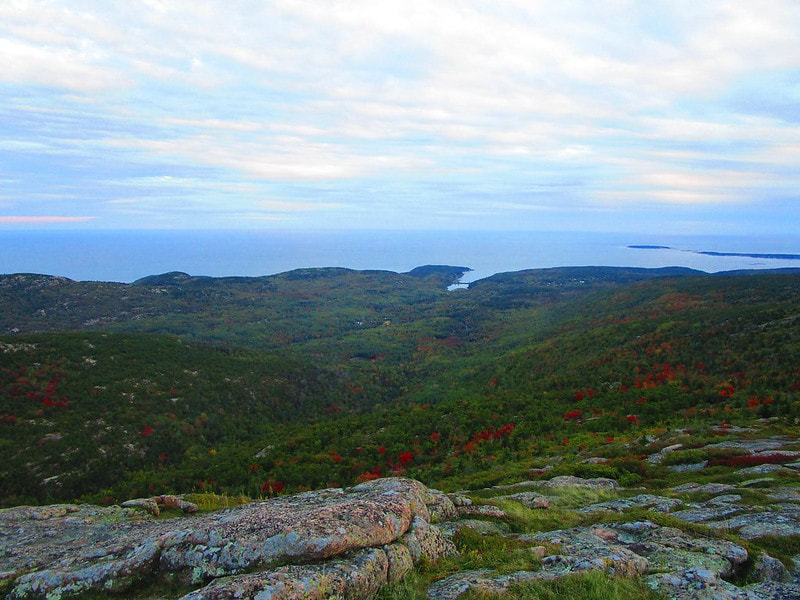 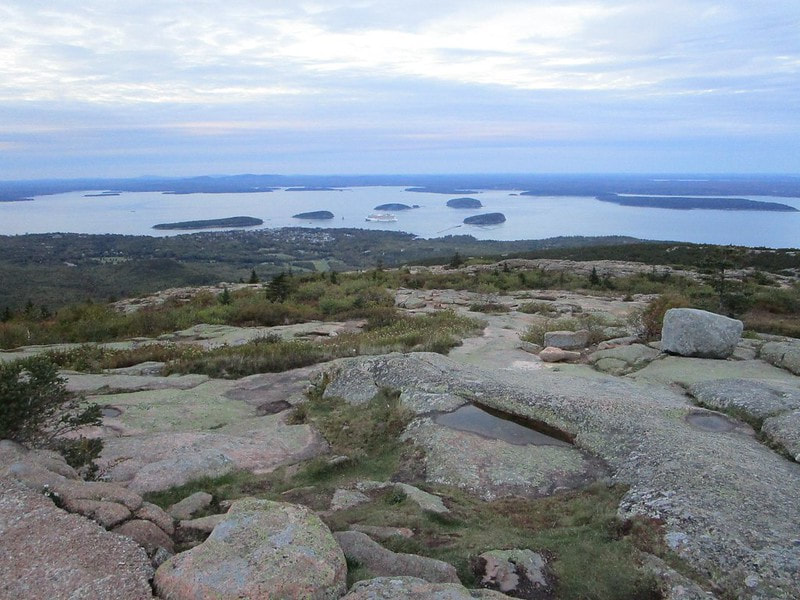