PAUL ACROSS AMERICA
US Route 45 runs from the shores of Lake Superior in Michigan's Upper Peninsula, south through eastern Wisconsin, eastern Illinois, western Kentucky, western Tennessee, and eastern Mississippi to end in Mobile, Alabama.  The northern end, to be more precise, is a couple blocks from Lake Superior in the town of Ontonagon, Michigan.  That's in the western portion of the Upper Peninsula.  US Route 45 continues south through mainly rural sections of the North Woods in Michigan and Wisconsin, before passing through Oshkosh, Fond du Lac, and Milwaukee's western suburbs.  US Route 45 is duplexed with Interstate 41 in the western suburbs of Milwaukee.  US Route 45 then passes through the western suburbs of another city: Chicago.  In downstate Illinois, it hugs the Interstate 57 corridor until Effingham, Illinois, then cuts south to cross the Ohio River into Paducah, Kentucky.  US Route 45 continues south through western Kentucky and western Tennessee.  It serves an important purpose in eastern Mississippi, connecting Tupelo, Columbus, and Meridian.  The final stretch heads south-southeast, crossing into Alabama to end at US Route 98 in Mobile. 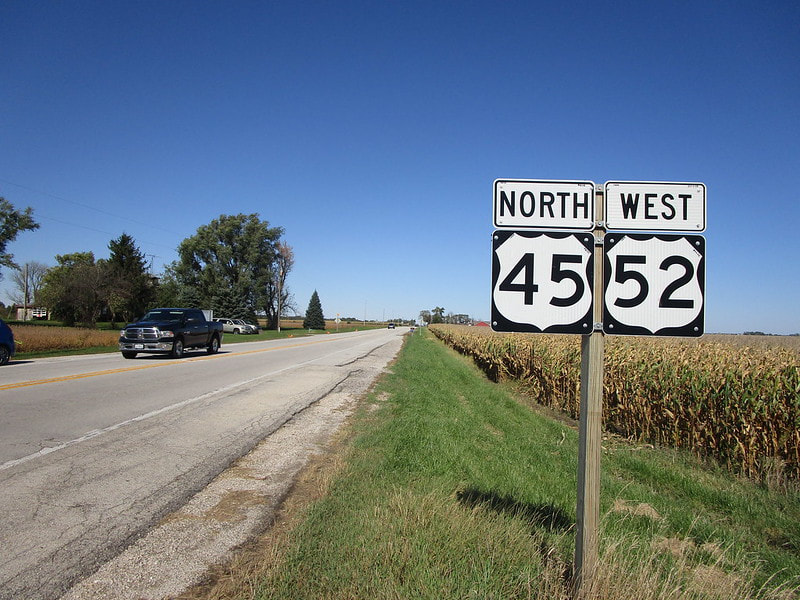 My photo for US Route 45 comes from eastern Illinois, at the southern end of its concurrency with US Route 52. The sign assembly depicted faces south at an intersection where US Route 45 turns westerly, US Route 52 turns easterly, and Illinois Route 49 gets its northern start. (I used the same photo for my US Route 52 shield.)  This photo opportunity presented itself accidentally, as I recognized some brand new, crystal-clear, signage facing into good lighting.  This photo was taken in October 2019 along a trip around eastern Illinois with a friend to places like Olney and Champaign-Urbana.
Back to the nationwide main page.
Back to the home page.