Glacier National Park, situated in northern Montana, is one of the best places to experience the Rocky Mountains of the contiguous United States.  It is associated with the neighboring Waterton Lakes National Park just to the north across the Canadian border; the brochures for Glacier National Park also cover Waterton Lakes, pairing the parks as "Waterton-Glacier".  Glacier National Park is named for the various glaciers at the top of many of the tallest mountains.  The snow and ice, though considered to be permanent, is gradually dissipating year after year, due to climate change.  This makes me want to return to the park so I can see all of the glaciers before they disappear, potentially in as little time as five to ten years.  Besides the glaciers, the national park boasts absolutely amazing mountain scenery, whether the mountains have snow caps or not.  Wildlife viewing opportunities abound, and waterfalls of various sizes prove marvelous sights to see.  Clear, clean lakes and streams provide canoeing, rafting, and kayaking opportunities.  It's just an all-around exhilarating mountain wonderland.  Photos will be split into three groups.  The first group of photos were taken hiking along a trail to see St. Mary Falls and Virginia Falls.

St. Mary Falls and Virginia Falls are both accessible from the same trail descending south from the Going-to-the-Sun Road, the main road through Glacier National Park.  St. Mary Falls, found along the way to Virginia Falls, is one of the most unique waterfalls I've ever seen. Looking at it from a certain angle, St. Mary Falls is sort of shaped like the letter "Z".  My photo of St. Mary Falls was actually my desktop background for a couple of years!  The first thing I saw departing on the hike, though, was this charred forest ravaged by a previous wildfire.  It was eerie and worth a photo, so I could remember in future years how eerie it felt. 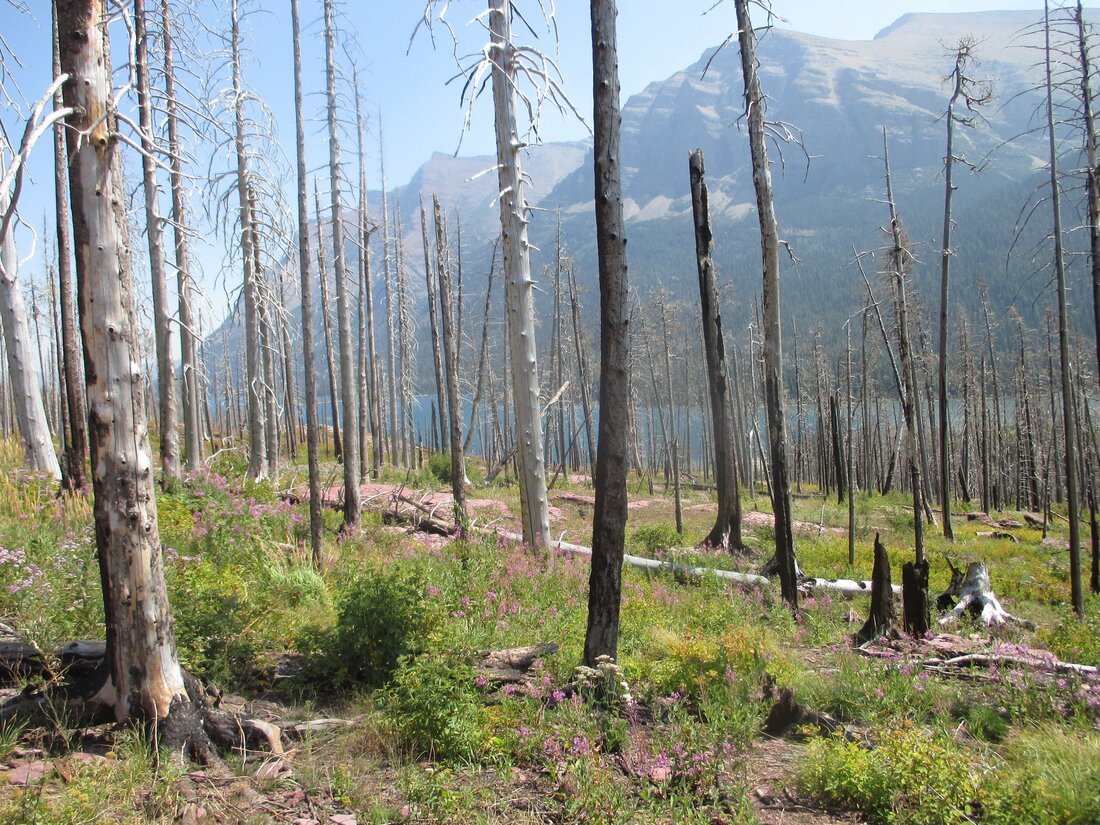 The next thing to see was St. Mary Falls in all its glory.  Some redneck doofus was jumping around swimming through the falls and endangering his life for the sake of disturbing everyone's attempts to take nice photos of the waterfalls, so I had to wait for him to get out of the way to snap this.  It's remarkable how both halves of the waterfall fall diagonally to the left.  Perhaps St. Mary Falls is actually two waterfalls?  Anyway, a short hike of low difficulty will bring you to see these magnificent falls. 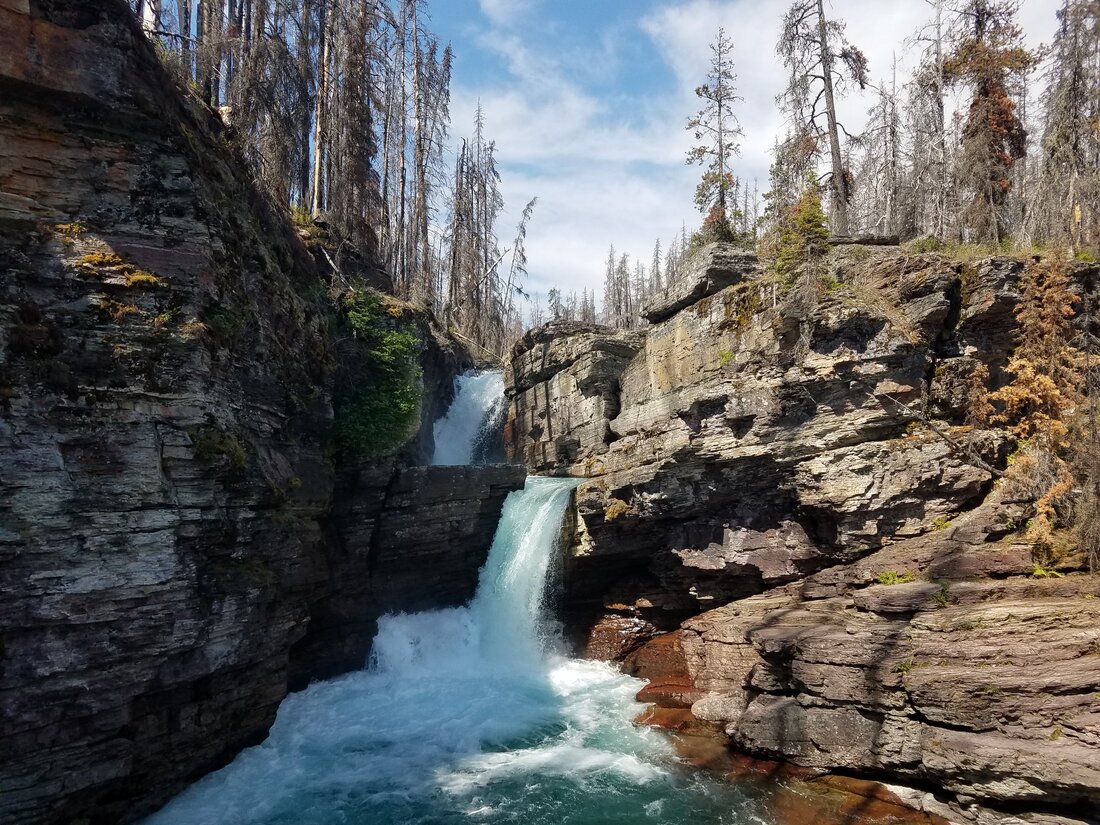 The hike from here onward to Virginia Falls follows loosely alongside a waterway.  This next shot is along the path between the two named waterfalls, looking down at a minor dell flowing downward toward the north: 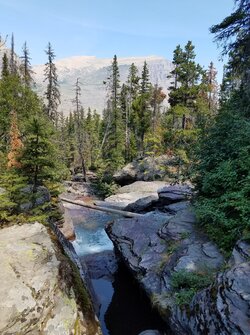 Virginia Falls, the ultimate goal of the hiking trail, is 1 3/4 miles from the trailhead.  It's a tall waterfall, isn't it?  Hikers will occasionally step into the pool at the base of the waterfall, which made it difficult to take a photo with all the other people out of the frame.  But I really like the sweet deal of getting to see two beautiful waterfalls in a hike that only takes two hours overall. 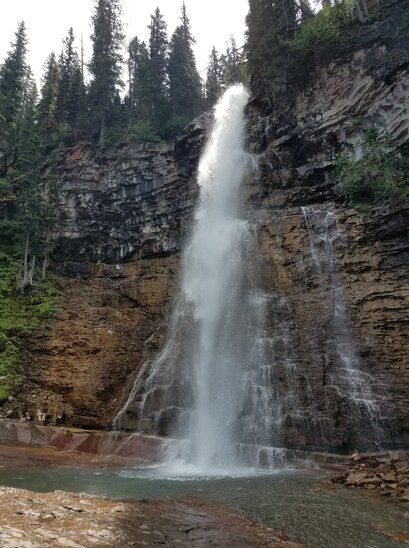 The Logan Pass Visitor Center, right in the middle of the Going-to-the-Sun Road, is a focal point in the center of the park. The Hidden Lake Trail starts right at the Visitor Center, and provides some easily-accessible breathtaking views.  I recall a boy in a wheelchair making his way down the trail, securing himself the right to take in some of this beautiful scenery.  The ultimate goal of the Hidden Lake Trail is to provide a scenic overlook that features a view of a lake surrounded by mountains. 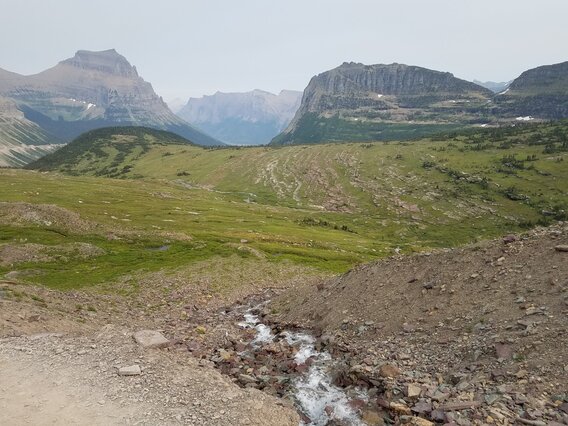 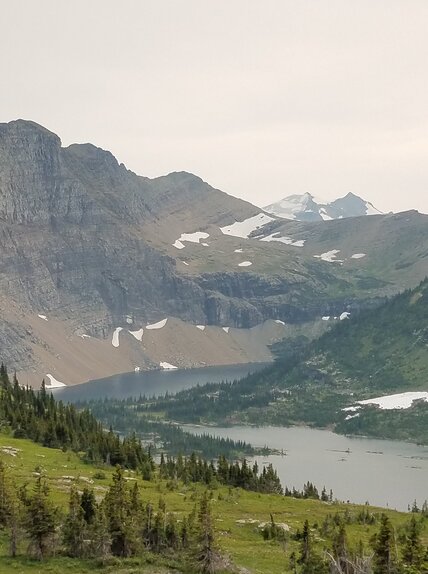 Along the Hidden Lake trail, we encountered a bevy of shaggy white mountain goats! 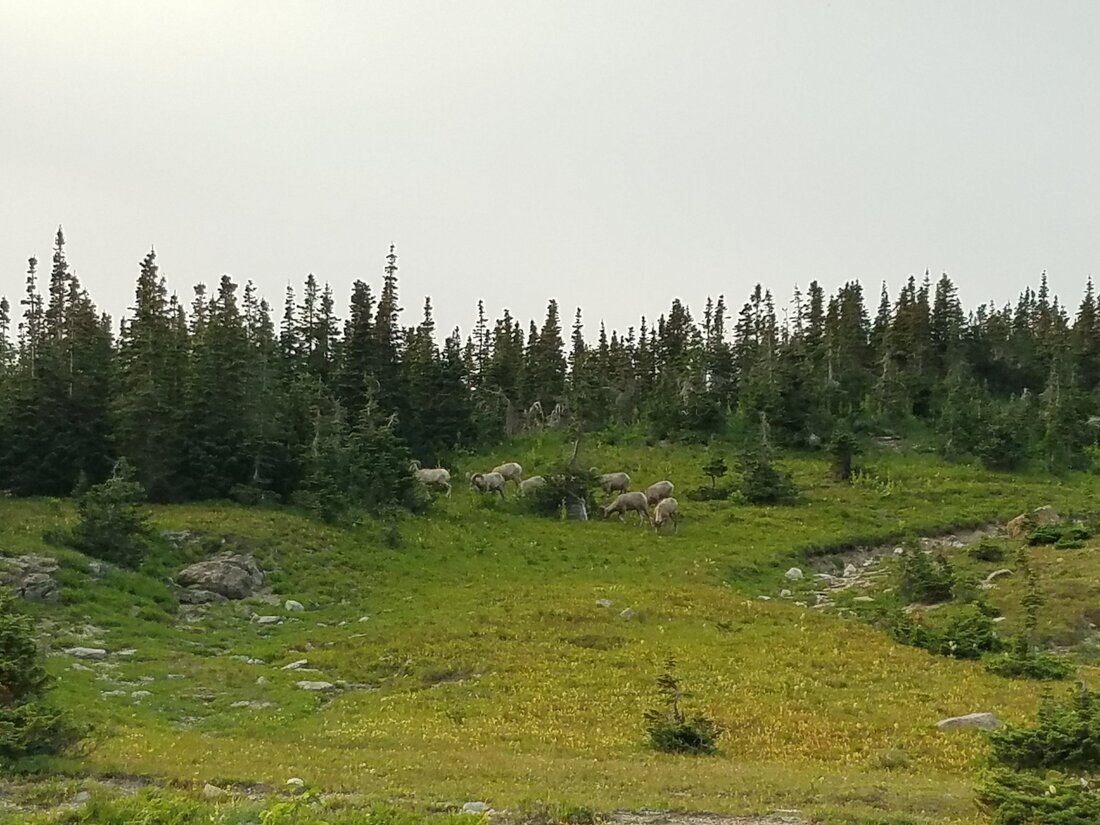 This mother goat and her baby were right on the trail.  We tried to stay at least thirty feet away from them, so they wouldn't feel threatened.  We did it to keep ourselves from feeling threatened as well...the mother ended up charging at some other hikers who paid no mind to allowing them their space.  We very nearly caught it on film (my wife stopped recording as soon as it happened!).  Watch out for animals, especially the ones who visibly are virtually guaranteed to be protective! 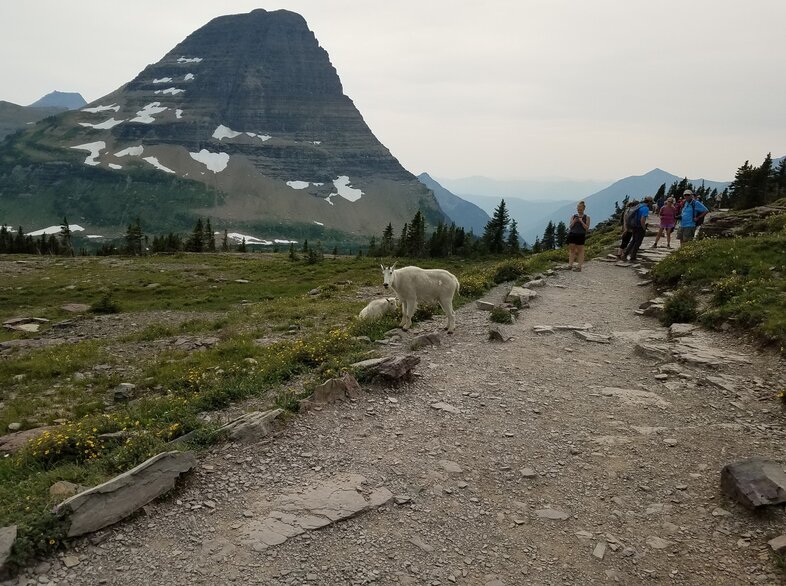 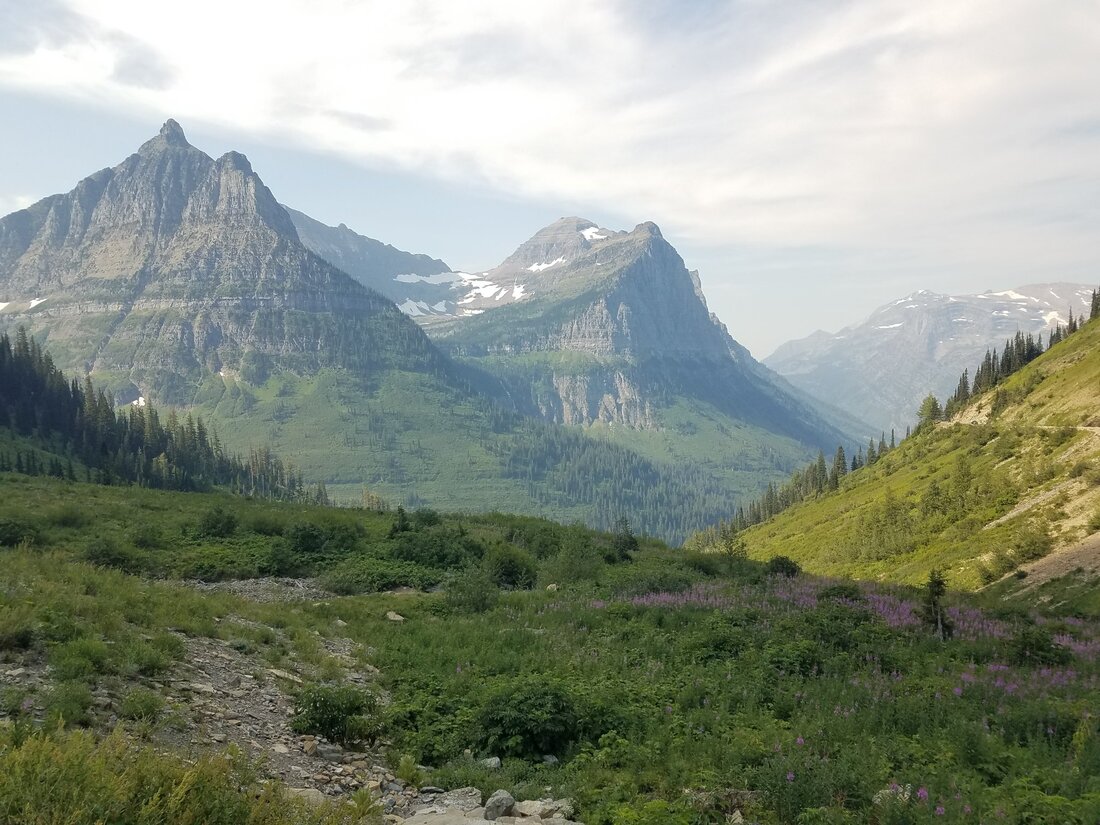 Here is a view from the overlook sitting at the far end of the Hidden Lake trail: 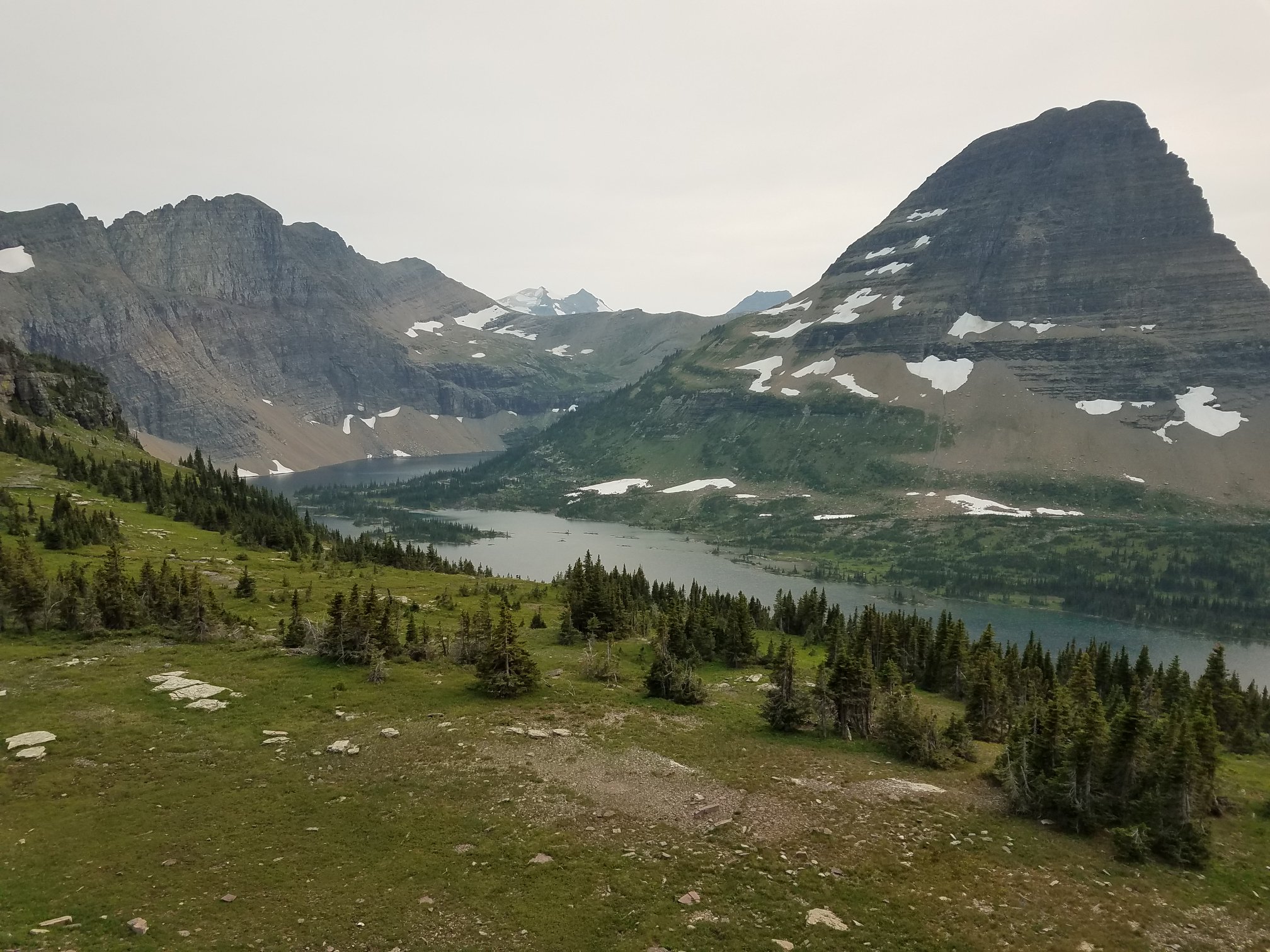 Here are a couple shots walking back to the car.  Parts of the trail are lined with these little waterfalls caused by bouts of snowmelt.  A marmot was sitting at a distance, but I still wanted to try and photograph it.
Part 3: Two Medicine Lake and Running Eagle Falls

A hike to Grinnell Glacier was supposed to dominate day two of our visit, but my wife had something stuck in her eye that wouldn't come out.  We spent the morning heading to a Walgreens to get some eye drops and eye wash to flush it out.  Apparently, visiting during a severe drought had its setbacks.  In fact, a fire broke out in Columbia Falls as we were staying there--it was blazing outside of a restaurant where we ate dinner.  We needed a secondary plan for our afternoon, and we settled on heading to Two Medicine Lake to try canoeing or kayaking.  Here are scenes from a canoe on Two Medicine Lake, in the eastern portion of the national park. 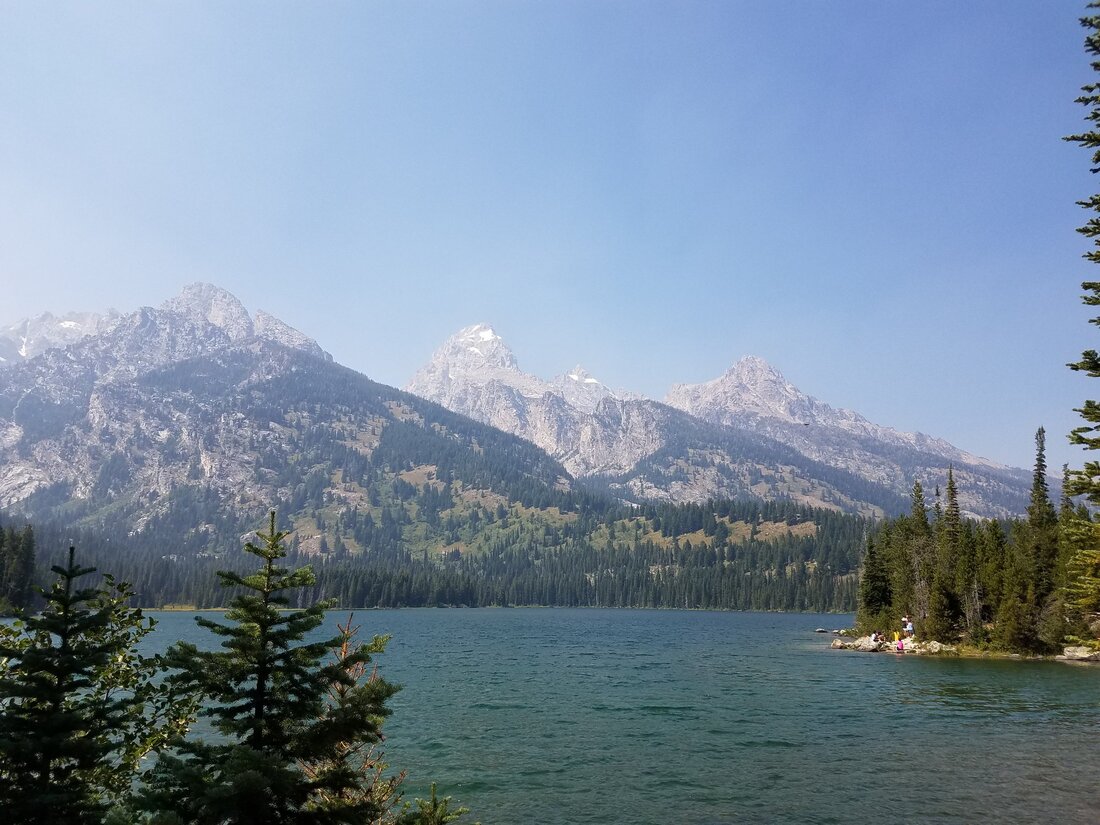 My wife wasn't sure about being in a boat on the water at first, but she ended up really enjoying it!  Canoes and kayaks are a chilled-out experience on lakes where you have free reign.  I recommend a steady lake like this for a first-timer's experience.  You can go at your own pace and work only as hard as you feel like working.  After all, who wants to work hard when you're on vacation?  The Two Medicine Ranger Station, on the shore of the lake, offers kayak and canoe rentals right on the spot.  They were out of kayaks, though, so we opted for a canoe instead. 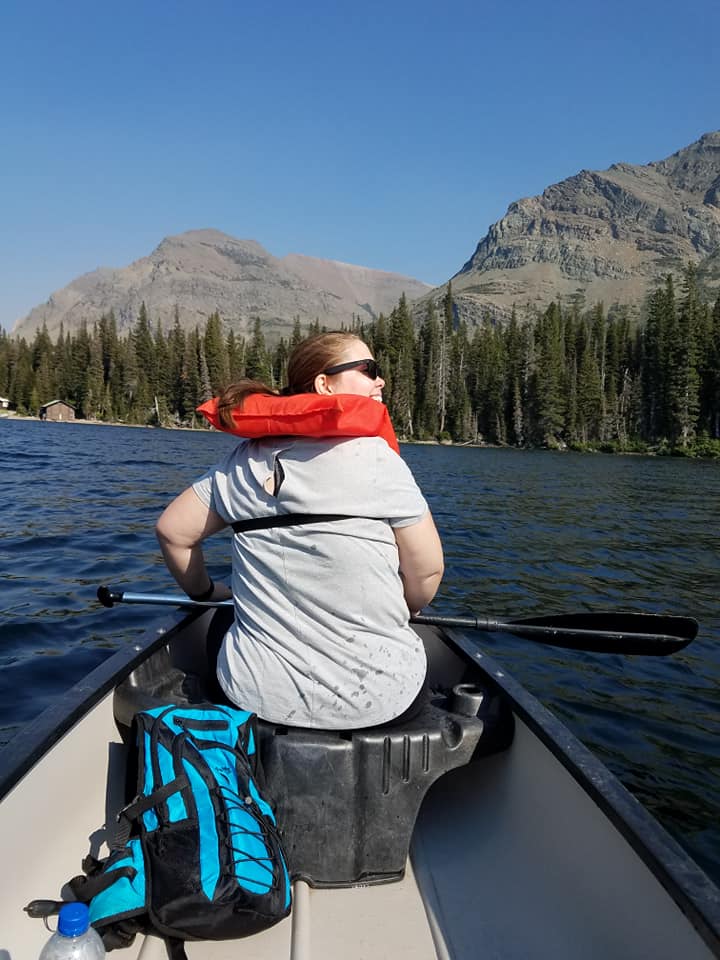 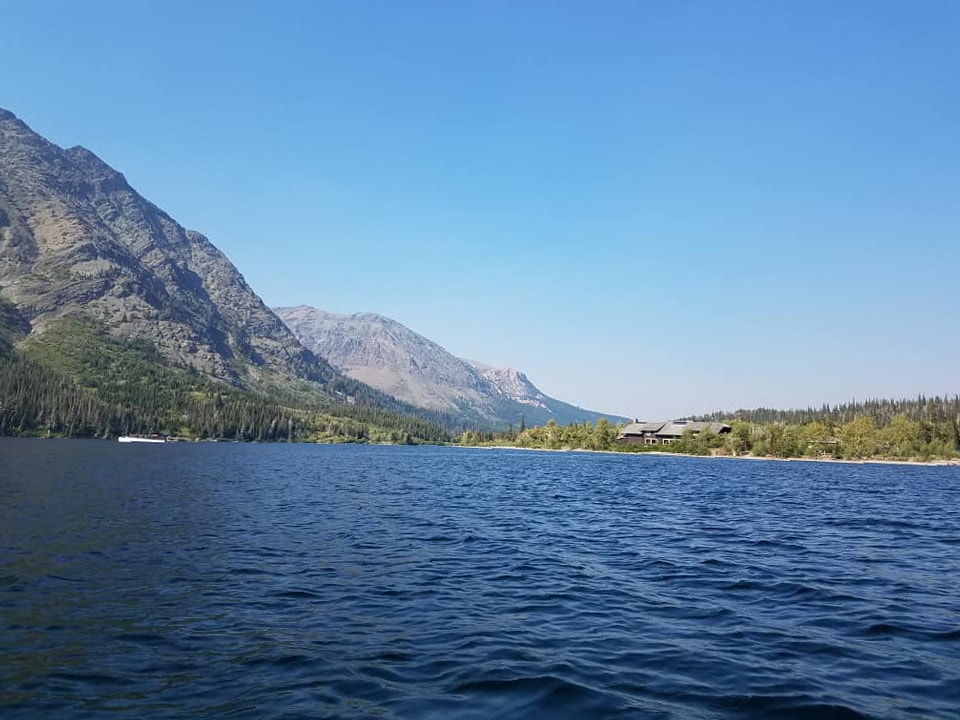 A very short trail near the Two Medicine Ranger Station led to a waterfall and these really colorful rocks.  I don't think I had ever seen a more colorful array of naturally-occurring rocks before.  It was worth a photo! 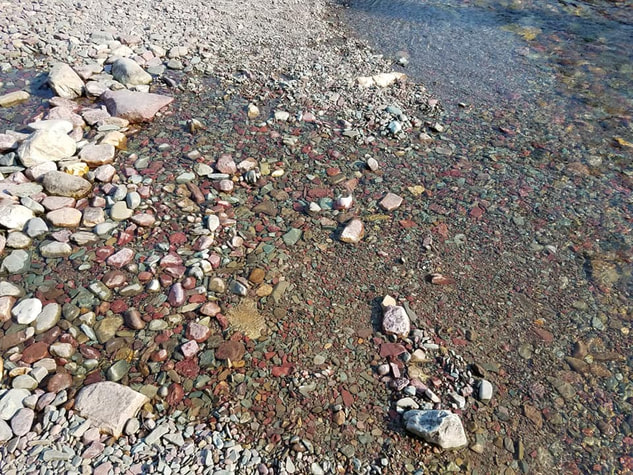