PAUL ACROSS AMERICA
US Route 78 runs from Memphis, Tennessee, to Charleston, South Carolina, in the American South.  US Route 78 looks to have its western endpoint at the concurrency of US Routes 64, 70, and 79, in Memphis, but it's hard to know for sure because Memphis and Tennessee are both notoriously bad at signing their routes.  Much of US Route 78's length between Memphis and Birmingham, Alabama, has been converted to Interstate 22 in the past decade.  About half of Interstate 22 brings US Route 78 through northern Mississippi, leading through towns like Holly Springs, New Albany, and Tupelo.  In Graysville, Alabama, just short of Birmingham, US Route 78 splits from Interstate 22 onto a surface road, leading into downtown Birmingham.  From Birmingham east to Atlanta, Georgia, US Route 78 closely parallels Interstate 20.  East of Atlanta, US Route 78 forms an alternative to Interstate 20 that deviates a bit north to service Athens, Georgia.  US Route 78 drifts back southeast to meet Interstate 20 in Augusta, Georgia, but then it continues doing its own thing independently of any Interstate so it can reach Charleston more directly than any path provided by freeways.  US Route 52 joins US Route 78 into Charleston, and both of these routes end at US Route 17 in the heart of Charleston, South Carolina. 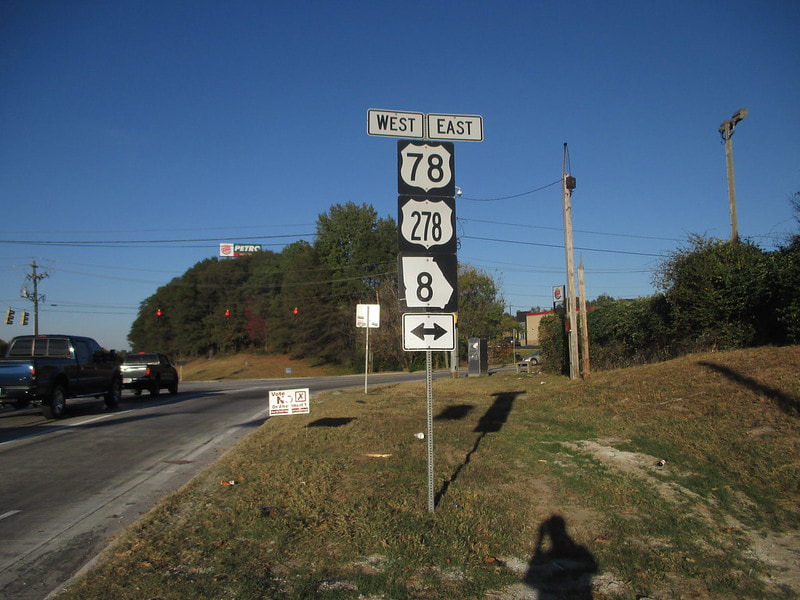 My photo for US Route 78 is a Georgia special.  The sign assembly shown faces south at traffic using the northbound offramp from Interstate 285 at exit 12 on the west side of Atlanta.  Georgia is notorious for square route markers, no matter how large the enclosed number, and skinny fonts used on those markers. Georgia is also notorious for having a state highway running concurrent with every inch of US highway in the state, so Georgia State Highway 8 occupies this alignment of US Route 78.  US Route 278 is also concurrent with US Route 78 at this point.  I was making the return trip from my second visit to the Gulf Coast when I took this photo, in November 2016.
Back to the nationwide main page.
Back to the home page.