Channel Islands National Park is a lightly visited national park renowned for snorkeling opportunities, marine life sightings, and unique plant and animal species.  The islands home to the national park are just off the coast of southern California, south of the east-west bit of coastline that extends west from Los Angeles.  From west to east, the four islands comprising the chain are San Miguel Island, Santa Rosa Island, Santa Cruz Island, and Anacapa Island.  Anacapa Island is a small island split into three parts by two narrow breaks.  The Channel Islands are referred to as the "Galapagos of the Northern Hemisphere," as the islands are home to a vast collection of species found nowhere else on Earth.  That collection of species includes the Island Fox, which you'll see in photos farther down this page.  The park's limited attendance is baffling to me, because it's accessed via Oxnard and Ventura, which are an hour's drive from Los Angeles, the second-largest city in the United States.  The concessioner operating boats bringing visitors to the islands, the Island Packers, essentially guarantees dolphin sightings during the majority of the year. When we visited in late October of 2021, the boat ride bringing us to and from Santa Cruz Island granted us the sight of literally hundreds of dolphins in a pod all within our peripheral vision.  (Photographing fast-moving dolphins proved very difficult, however.)  You get to see unique plant and animal species found nowhere else in the world, pass by dolphins, whales, and sea lions, and hike dramatic cliffsides on tall majestic islands that rise from the Pacific Ocean!  What's not to love?

Our visit was planned to consist of two day trips, with one day trip heading to each of two different islands.  The first day trip was successful, giving us the chance to hike around Santa Cruz Island.  The second day trip wasn't quite successful; while we were aboard the boat trying to land on East Anacapa Island, the captain couldn't dock the boat due to excessively volatile wave action.  In the best interest of keeping the tourists safe, the captain chose to refrain from letting us land on the island.  As consolation, he gave us a tour by boat of the perimeter of all of Anacapa Island, whereas our intended hiking would only show us the eastern third of it.  (Honestly, the tour of the entire island by boat was probably more fulfilling than being stuck on the small eastern third of the island for 5 hours.)  The boat tour showed us a lot of wildlife, including sightings of five different humpback whales!
​
Day 1: Santa Cruz Island

We first arrived on Santa Cruz Island by docking at Scorpion Ranch, the site of a former sheep ranch. 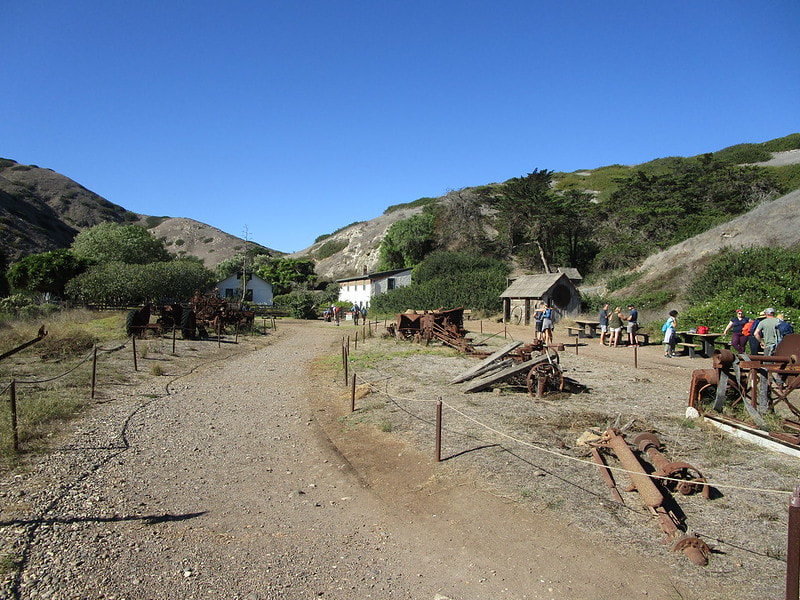 When you take a day trip to an uninhabited island via boat, you have two options: make it to the boat carrying you back to the mainland by the specified departure time, or get stranded in a pitch-black wilderness overnight.  Santa Cruz Island, our destination for the day, is home to a campground, so maybe some campers would welcome us into their tent overnight had we become stranded.  But thankfully, we didn't need to entertain the idea of being stranded on the island very much, as we recognized the great need to fit our hiking schedule into the allotted time frame.  Our boat, operated by Island Packers, deposited us at Scorpion Anchorage at 10:00 AM, and a park ranger addressed all of us disembarking from the vessel.  He notified us of the importance of sunscreen usage on the island, as the island has almost no trees and no shade.  He also notified us of the crafty and clever nature of the ravens on the island--these birds are evidently so intelligent that they know how to unzip the packs brought by humans onto the island!  He told us to guard our bags at all times.  Several toilets are provided right at the Anchorage, and since we all had just been riding the waters of the Pacific Ocean for one hour, using these toilets is virtually a required rite of passage onto the island.  Scorpion Anchorage is also outfitted with a visitor center, where I acquired a stamp for our national park passport. 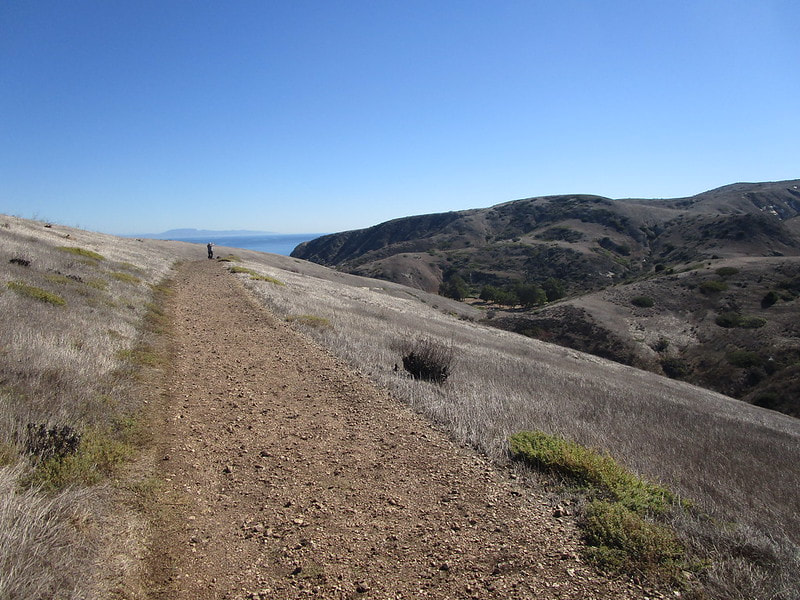 Then, there was nothing to do but hike the island!  Our hike took place at the eastern end of Santa Cruz Island, the largest of the islands in Channel Islands National Park.  We went west to Potato Harbor using the inland path through the campground.  We would make the return trip east hugging the northern edge of the island. 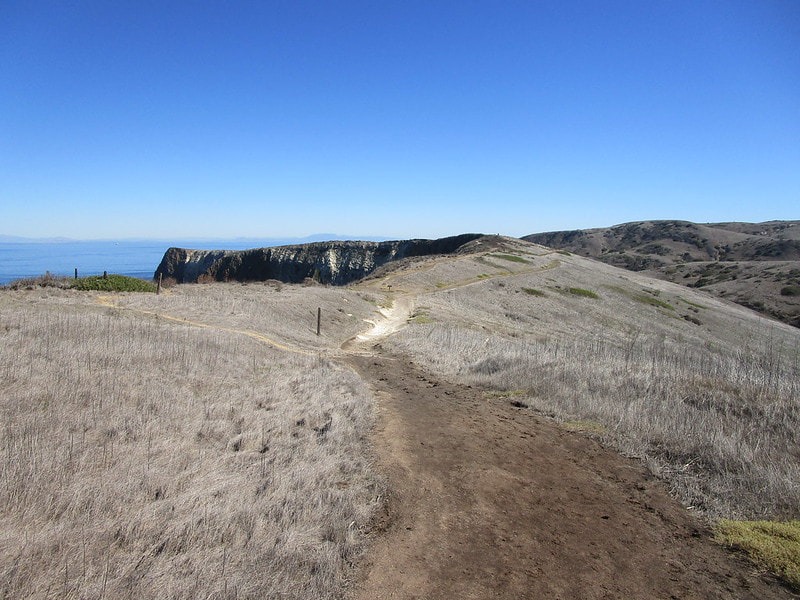 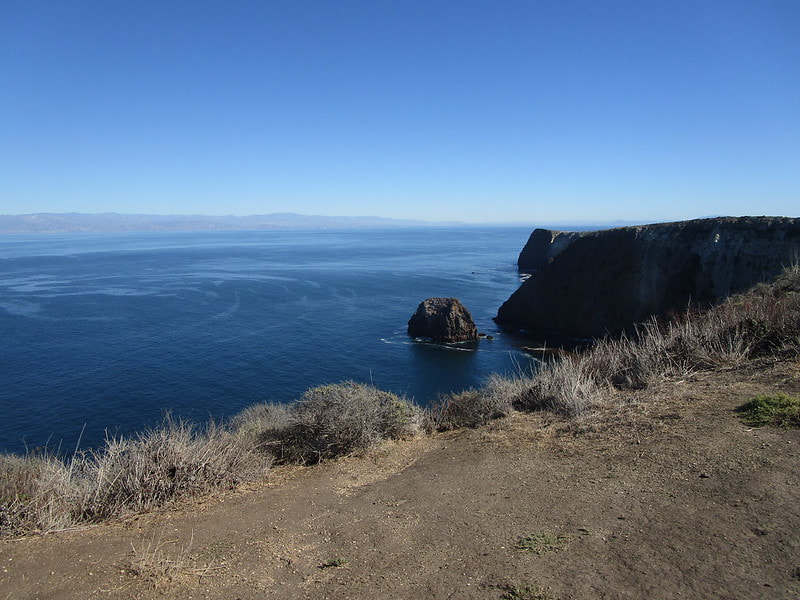 Not included in this image of Potato Harbor is the continuous distant echoing of sea lions clamoring with one another.  Based on what I was hearing, I estimated that the sea lions were all beached right at the back left corner of the harbor, next to that small upward pyramid-shaped island.  I can still hear their goofy noises echoing through my mind when I see this picture. 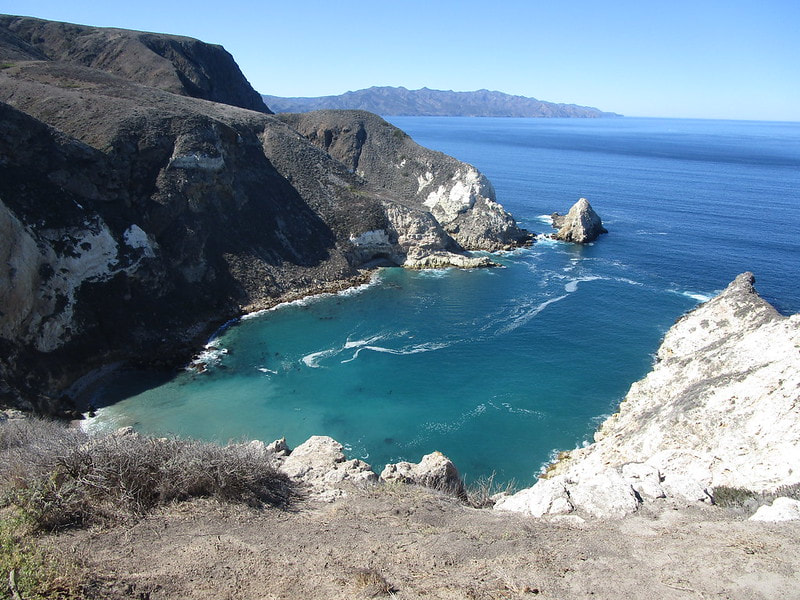 That was as far west as our hike would take us. At the Potato Harbor overlook, I found a nice rocky ledge that served as a sufficient makeshift bench, where I would sit down and eat the sandwiches we packed into the park.  It had gotten to be 11:30 in the morning at that point. 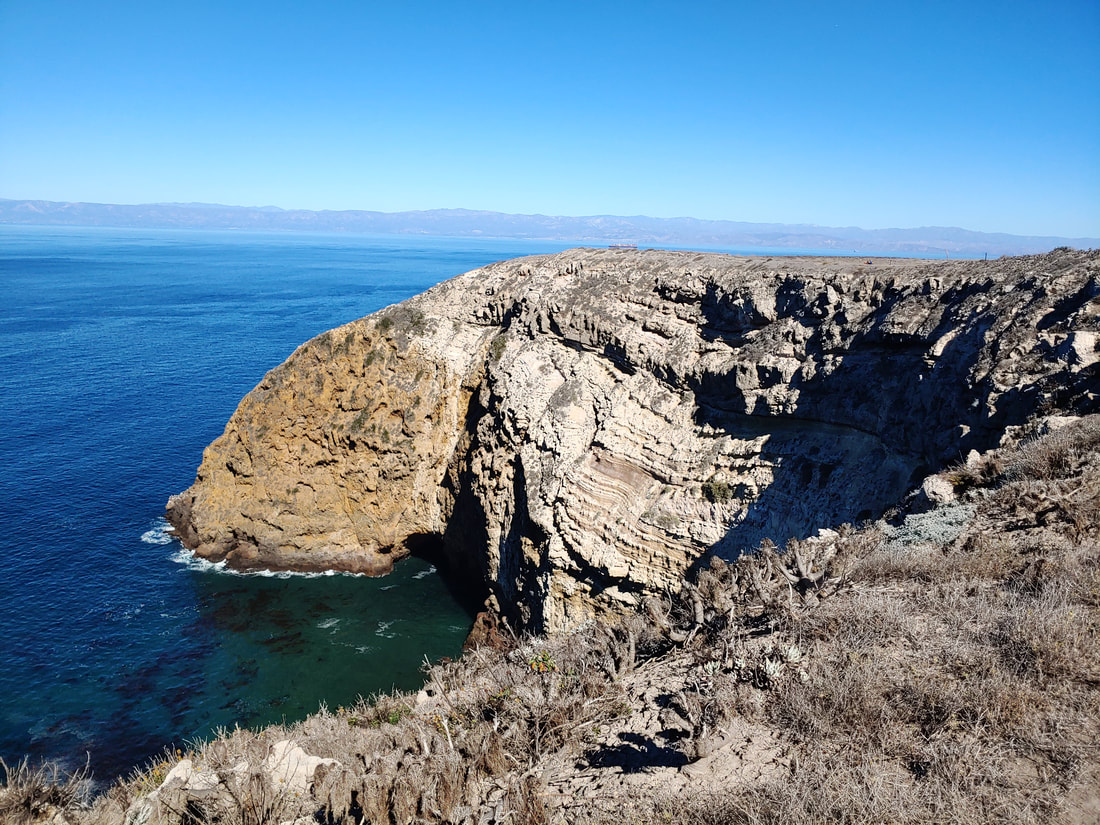 From Potato Harbor, we hiked east along the tall northern cliffs of the island.  Note the absolute lack of trees. 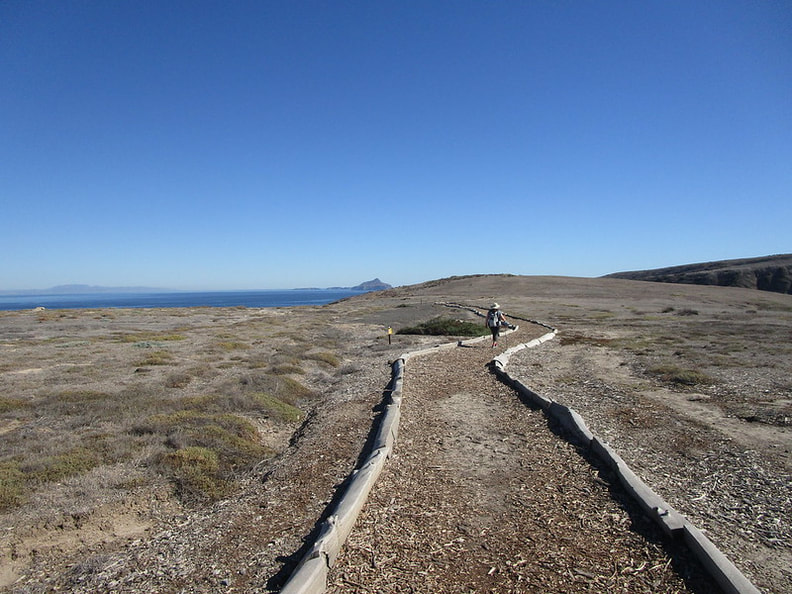 Hiking east, we got our first look at Cavern Point: 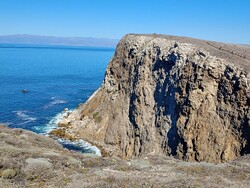 Just before walking up to Cavern Point, we came across this small seating area where two ravens were emitting their understated squawk. The ravens were tagged with the numbers "11" and "13", showing that naturalists are trying to keep track of them: 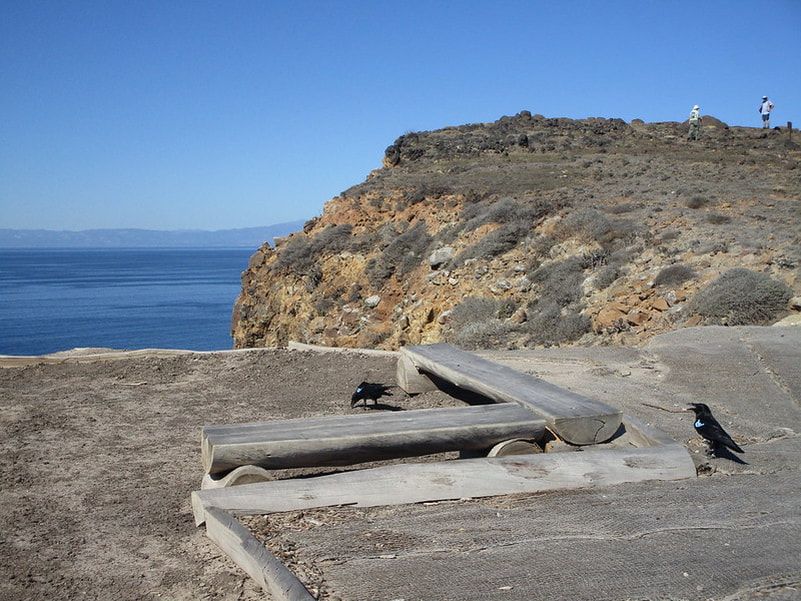 Here's a view looking west from Cavern Point.  The mainland is visible on the right side of the photo. 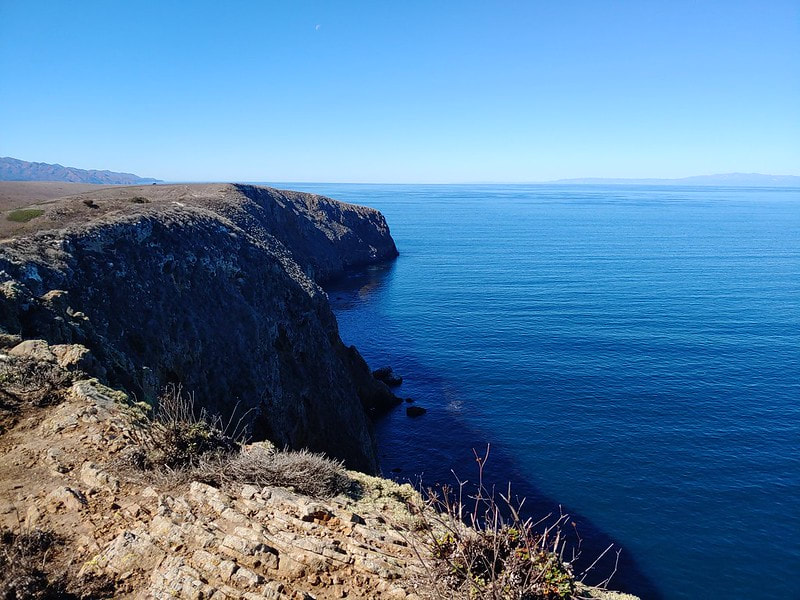 After this, we rounded the final bend back down the rock staircase to Scorpion Anchorage, which we could view from above just before arriving: 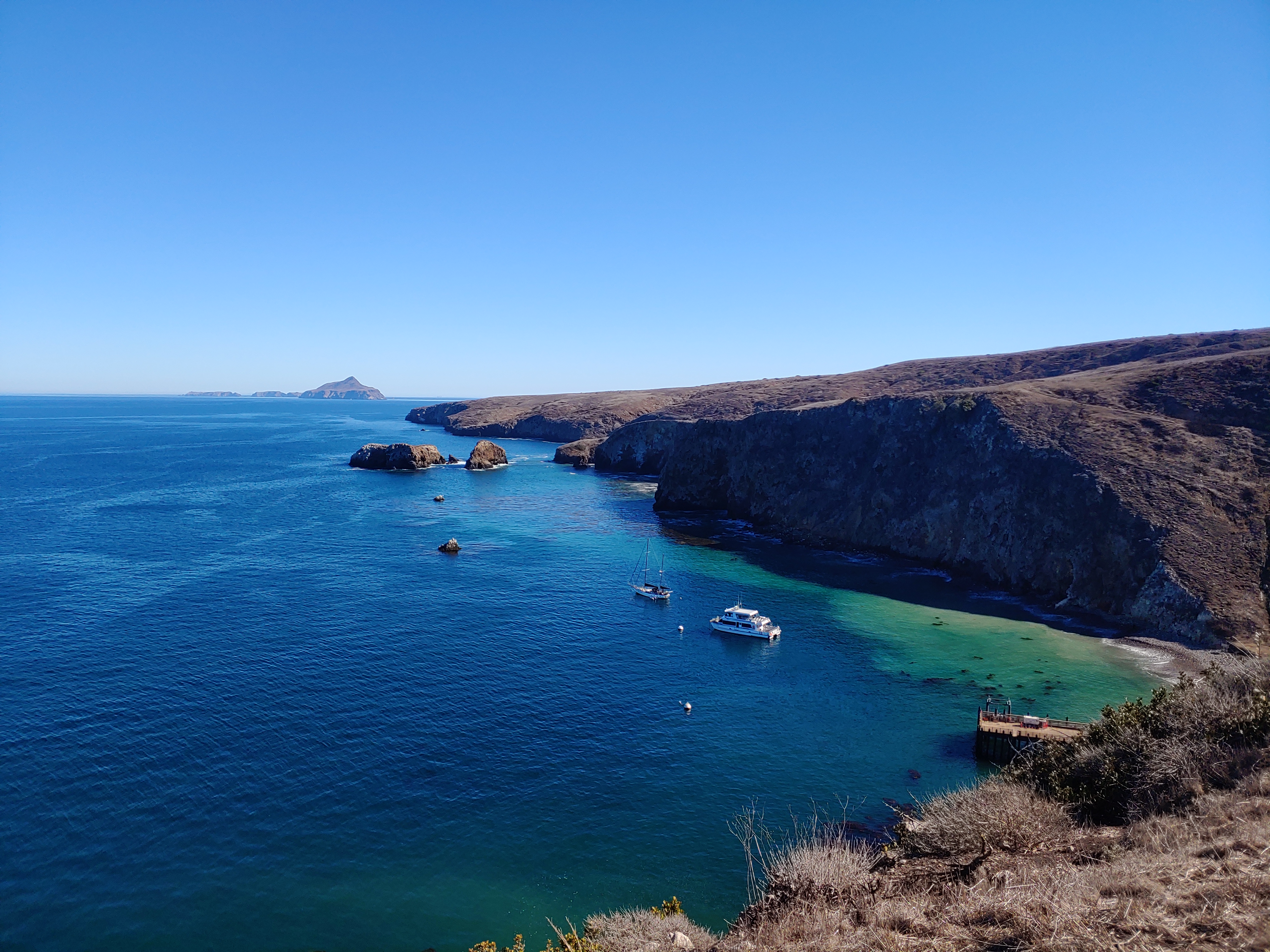 We safely got back to Scorpion Anchorage with an hour of fluff time...Better to have an hour to spare than to be stranded on a wild island overnight.  With an hour to spare before the boat departed for the mainland, my wife decided that maybe we should wander toward the campground for a bit to pass the time.  I'm very glad she suggested this, because it gave us a chance to see my favorite thing I saw on the whole island, the Island Fox! 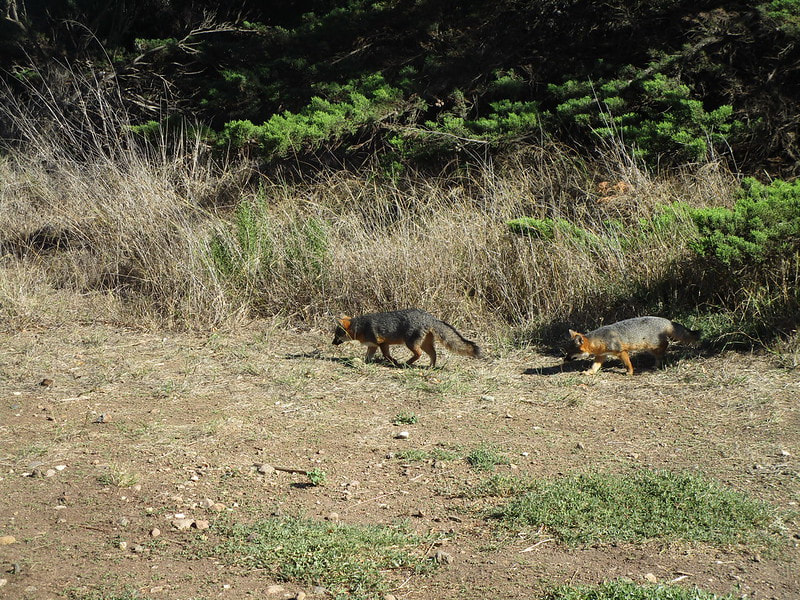 When disembarking from the boat to the island, a naturalist told us that the foxes can commonly be found near the campground. The area near the campground is exactly where we found the two pairs of Island Foxes that we saw. Look how cute they are!  The gift shop for Channel Islands National Park, located at Ventura Harbor, has custom-made little plushies of the island foxes.  Of course I bought one.  The Island Fox is not just a species located exclusively in Channel Islands National Park; the Island Fox species is found only on Santa Cruz Island. 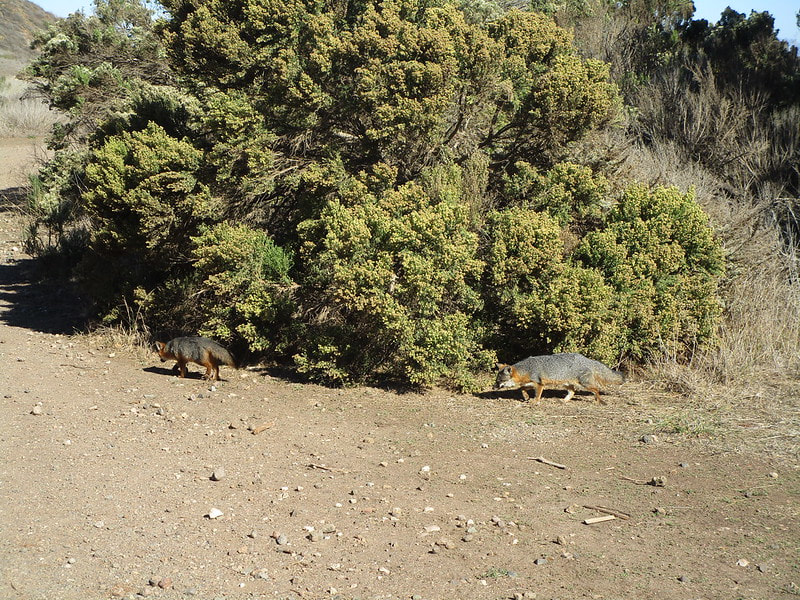 Elated that I got a chance to see the exclusive Island Fox, I got on the boat back to the mainland, with my wife.  Little did I know that my streak of wildlife sightings was far from over.  As our boat was making its overall eastward journey back to Oxnard Harbor, the captain suddenly steered the boat toward the left.  My reaction to this was confusion, but then the captain used the intercom to announce to all the passengers his reason for veering left.  Just northwest of us was a pod of dolphins.  It was a huge pod of dolphins.  I didn't think that I would ever look across a section of ocean and see the positions of probably over a hundred dolphins making their presences known, skimming the surface, but that's exactly what I saw!  As dolphins are very energetic, it was very difficult to capture them in photographs.  They were mostly very far from the boat, save for the few we got to briefly see swimming close to the boat, and they were always moving quickly. 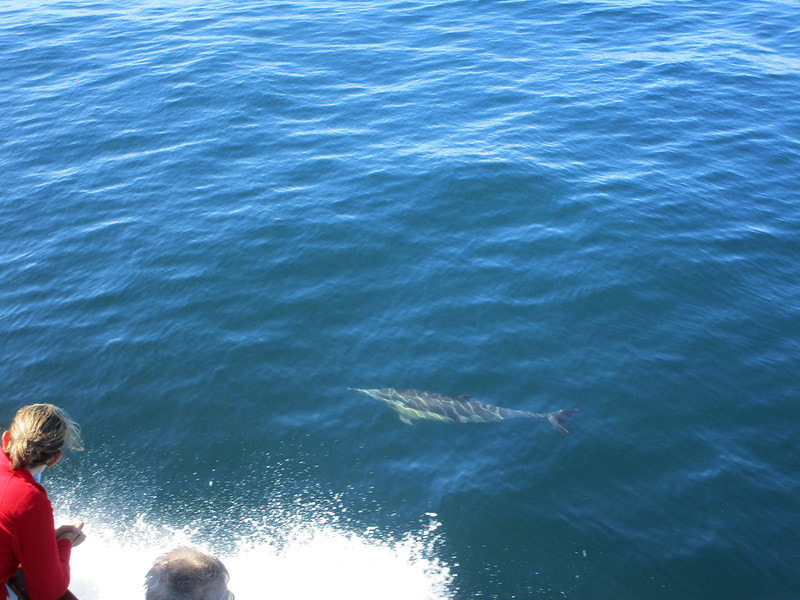 The photos below are in no way an adequate representation of the absolute wonder of seeing a great many dolphins playing among the waves, but I'll show you a couple of them anyway: 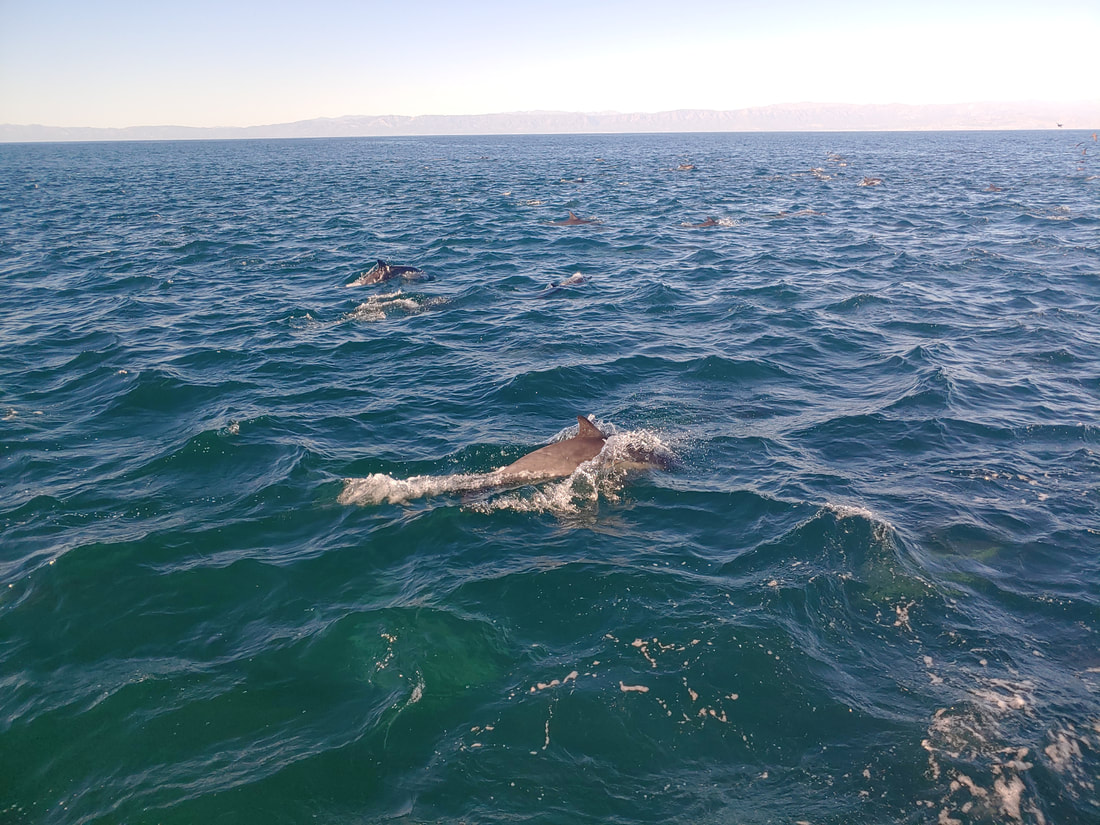 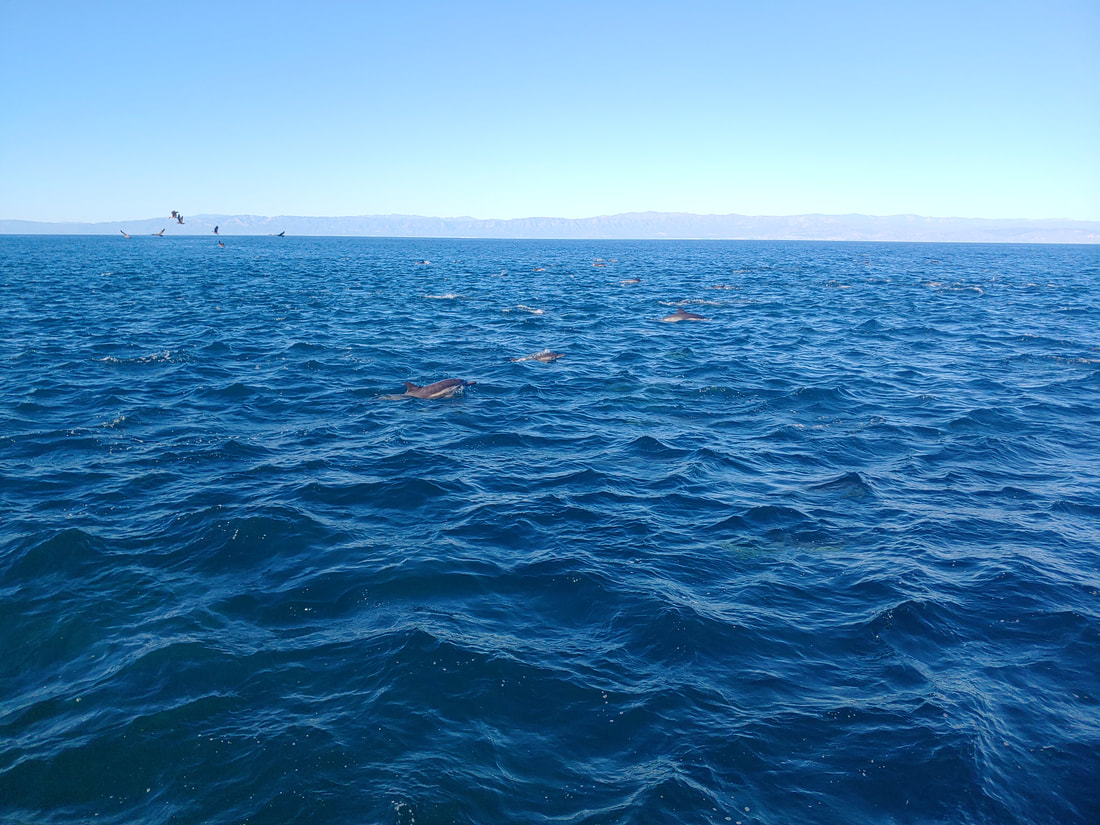 Whereas the first day's trip departed from Oxnard Harbor, this second day trip to Anacapa Island departed from Ventura Harbor, which is just to the north.  Our plans to hike East Anacapa had to be scrapped, because the choppy seas made it unsafe to land at the island's anchorage; however, not all was lost.  The boat tour the captain gave us as a consolation gave us the opportunity to see all three segments of Anacapa Island from the water, whereas the hiking tour only would have shown us the eastern third.  Hiking East Anacapa's trail network would have taken all of ninety minutes at the most, leaving us several more hours to kill before the returning boat would pick us up.  Ending up on this boat tour instead of the hiking tour perhaps turned out to be a blessing, actually.  Plus, regardless of any hiking plans, the boat ride itself granted us the chance to see FIVE DISTINCT HUMPBACK WHALES! 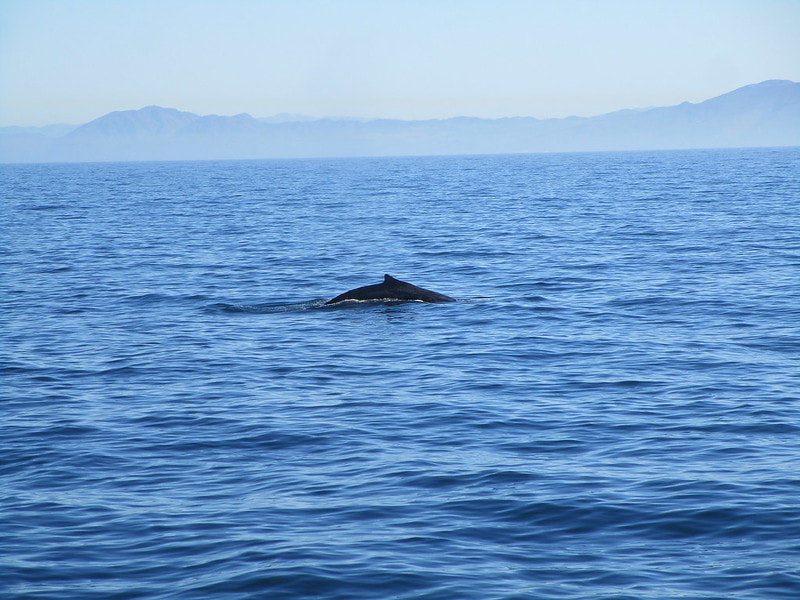 The occasional emergence of a humped back or whale tail were all the indications we got of the whales' presence.  These pictures were taken on my phone from a long distance, limiting the quality, but I'd like to share them to prove that I at least captured a tail sighting and a spout through the blowhole:
Here's a view looking at what we would need to climb in order to disembark from the vessel onto Anacapa Island.  To access this landing platform, a ladder needs to be established in order to reach it.  The vessel was bobbing up and down by several feet in the cove, making landing a dangerous proposition.  The captain tried for what felt like ten minutes to position the boat correctly, but made the difficult decision to deprive us of our island hike in the name of safety.  Safety is never a bad thing to prioritize when making decisions, so I have no regrets or resentment toward what happened. 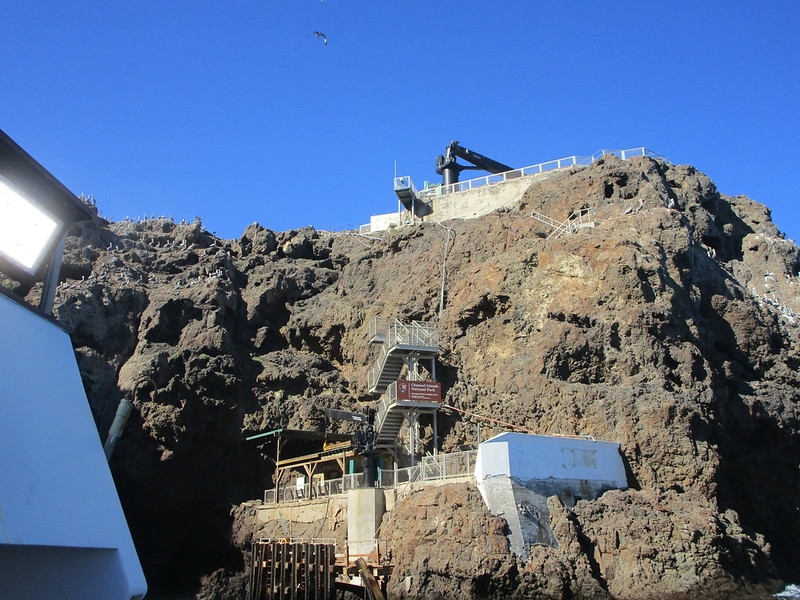 The captain opted instead to give everyone on board a guided tour of the perimeter of Anacapa Island.  On the eastern end of Anacapa is this arch-shaped rock smothered with pelicans. 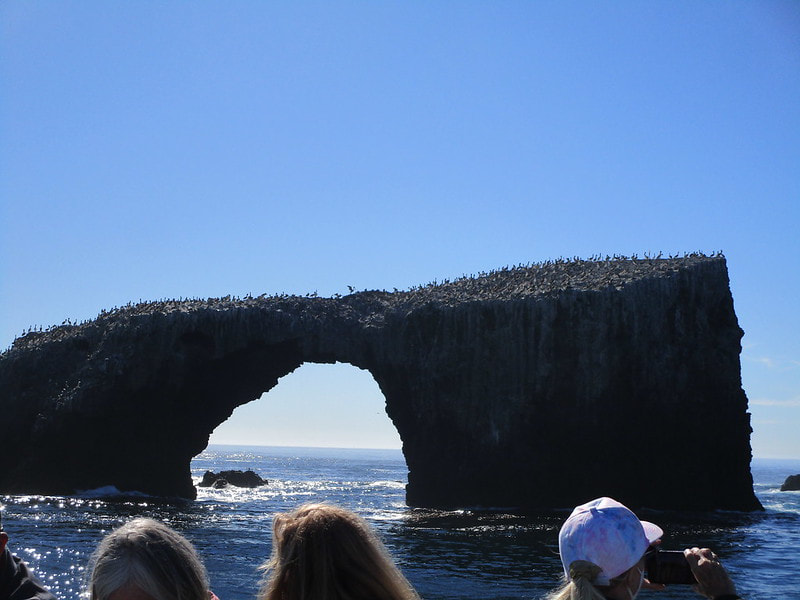 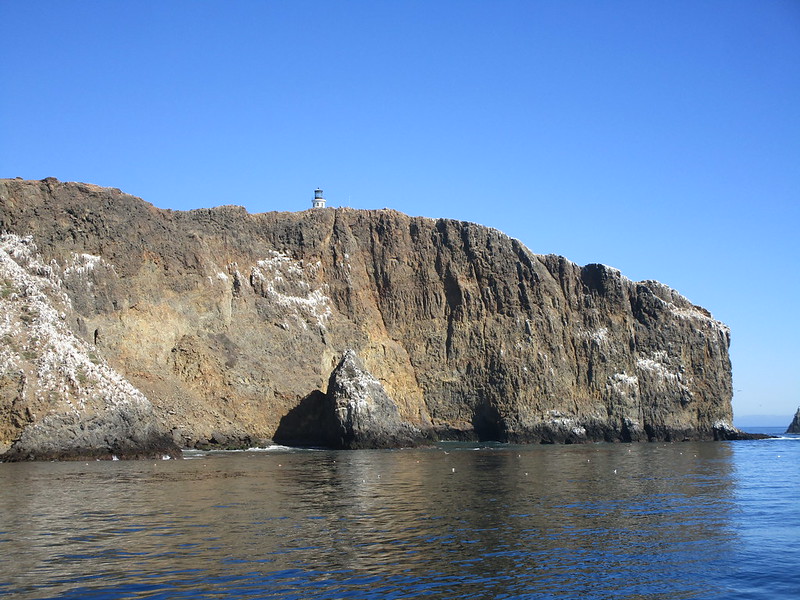 Various portions along the northern shore of Anacapa Island, especially Cathedral Cove, are famed snorkeling destinations, known as the places where people complete their first training session on their way to becoming certified. 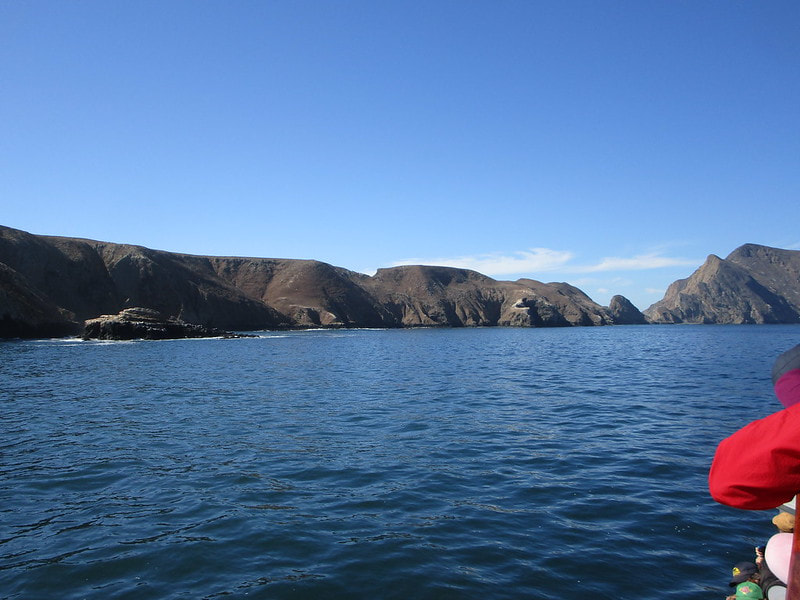 Keyhole Rock sits on the north side of Anacapa Island's middle segment: 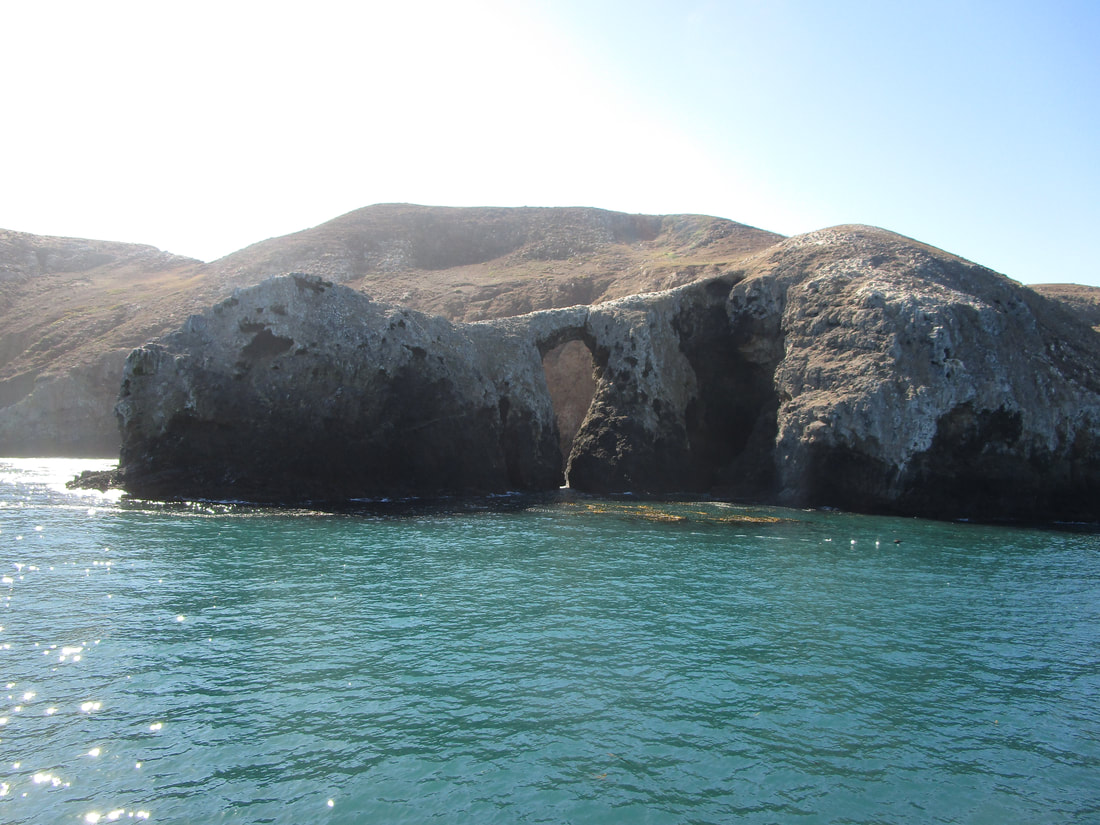 Frenchy's Cove divides the western segment from the middle segment: 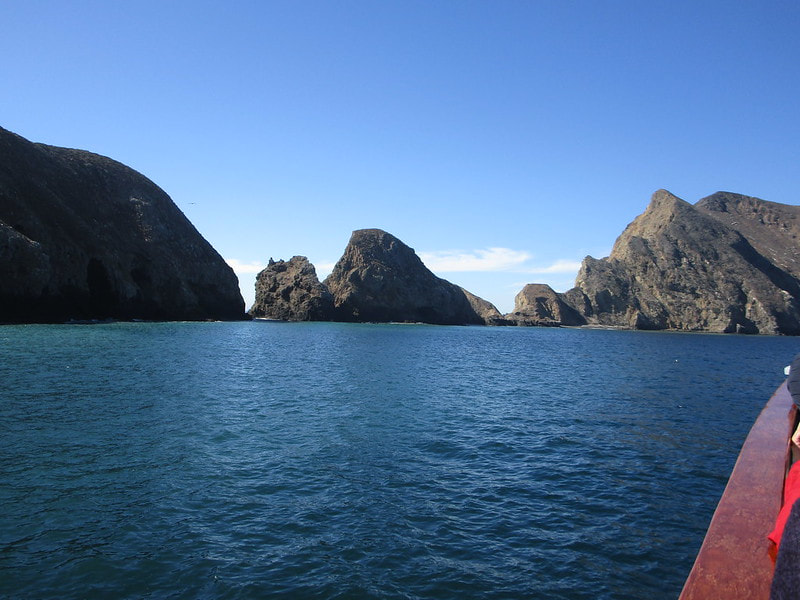 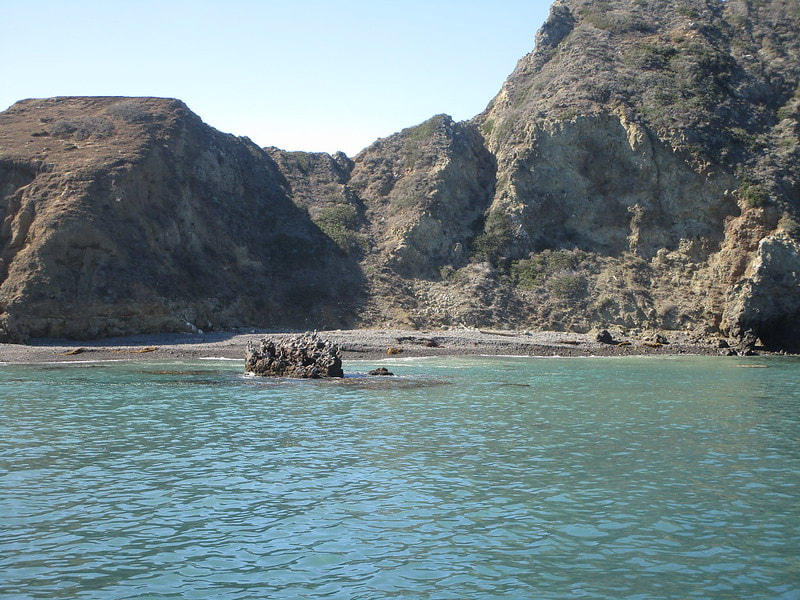