PAUL ACROSS AMERICA
US Route 23 runs from the northern tip of Michigan's Lower Peninsula to Jacksonville, Florida. It passes through Ann Arbor, Michigan; Toledo, Ohio; Columbus, Ohio; Appalachia, the Great Smoky Mountains, and Atlanta, Georgia, along the way.  US Route 23 begins in the north as a split from Interstate 75 in Mackinaw City, Michigan.  From there, it hugs the shore of Lake Huron until Standish, Michigan, where it joins Interstate 75 until Flint.  At Flint, US Route 23 once again splits from Interstate 75, which detours east to Detroit, but US Route 23 forms a more direct southward freeway through Ann Arbor to the Toledo area.  US Route 23 wraps around the west and south sides of Toledo using Interstate 475, then continues as a surface road for a bit.  US Route 23 forms the majority of a freeway from Findlay to Columbus in Ohio, then it passes through Columbus itself.  US Route 23 continues straight south from Columbus to Portsmouth, where it exits Ohio onto a routing that hugs the eastern edge of Kentucky.  US Route 23 is in the thick of Appalachia now, and it continues through the southwest corner of Virginia and the northeast corner of Tennessee, where it becomes the start of Interstate 26.  At Asheville, North Carolina, US Route 23 splits from Interstate 26 to wind southwest through the mountains of North Carolina into Georgia.  In Georgia, US Route 23 runs from the northeast corner of the state over to Atlanta, where it bounces off toward the southeast corner of the state.  The southernmost extent of US Route 23 joins US Route 17 east along a pair of one-way streets in downtown Jacksonville, Florida.  US Route 23 ends facing east at US Route 1 and US Route 90, both of which follow a north-south pair of one-way streets. 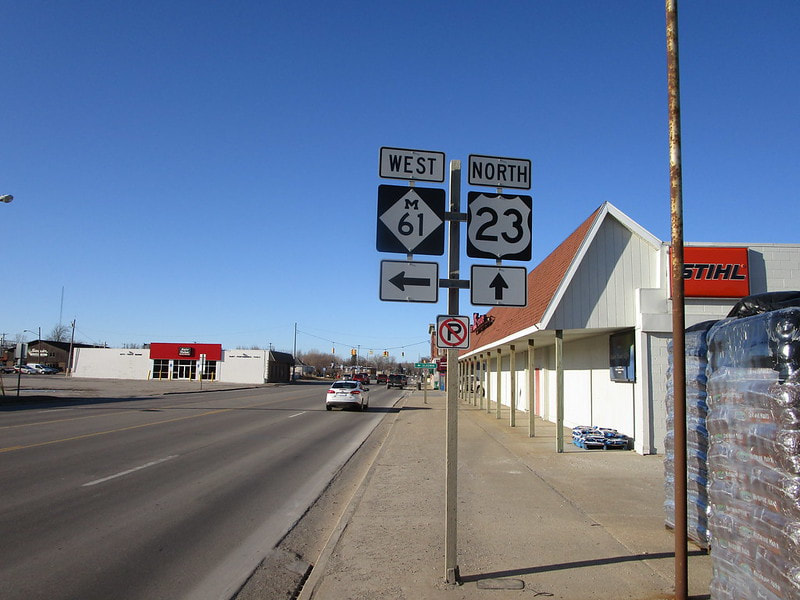 My photo for US Route 23 comes from Standish, Michigan, where the route meets the eastern end of Michigan Highway 61.  This is very close to the southern end of the portion of US Route 23 following a surface highway along Lake Huron, north of Michigan's "thumb". I took this photo facing north during a trip routesnapping Michigan on the state level, in March 2019 (the same trip as my US Route 223 photo).
Back to the nationwide main page.
Back to the home page.