Iowa Route 2 is one of Iowa's longest state highways, running across the southern part of Iowa.  The highway actually spans the width of Iowa's southernmost (complete) row of counties.  The western end of Iowa Route 2 crosses the Missouri River into Nebraska City, Nebraska, where it becomes Nebraska Route 2.  The eastern end doesn't quite make it to the Mississippi River, but it did so in the past, formerly reaching Fort Madison's bridge over the river to Illinois Route 9.  Nowadays, Iowa Route 2 is cut off at 20th Street and Avenue L in Fort Madison, Iowa; this intersection is the point where Business US Route 61 turns from 20th Street's northern leg to Avenue L's western leg.  A mile-long piece of Iowa Route 2 was deleted in Fort Madison when locals' disdain for truck traffic through town won out over political interest in maintaining the continuous east-west thoroughfare. Plus, wrapping around the north side of town on US Route 61 and dropping south to the bridge doesn't create too horribly cumbersome of a detour.  Nearly every county seat in Iowa's southernmost complete row of counties is connected by Iowa Route 2. 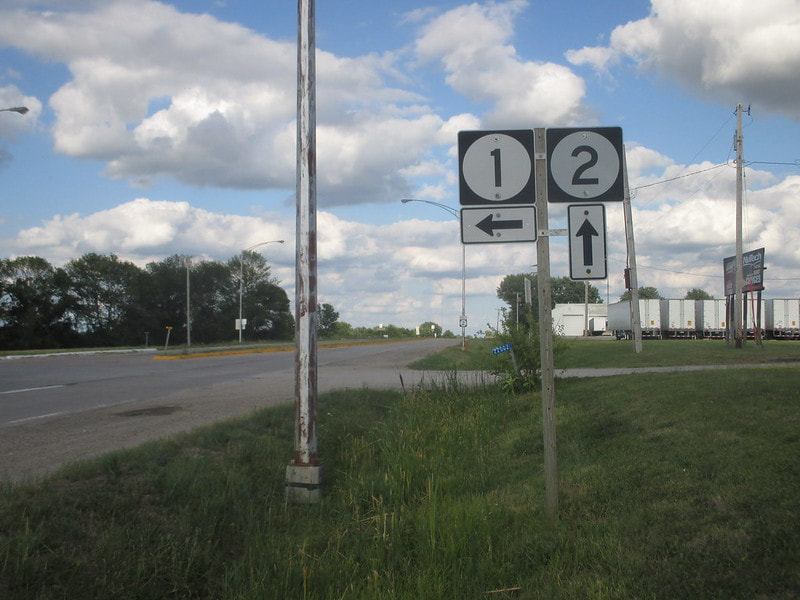