PAUL ACROSS AMERICA
US Route 441 runs from eastern Tennessee through the southwest corner of North Carolina, across all of Georgia and most of Florida.  The northern end is at Rocky Top, Tennessee, at US Route 25 and Interstate 75.  From there, US Route 441 crosses through Knoxville, cuts east to the Great Smoky Mountains, then heads south through North Carolina's southwestern corner into Georgia.  In Georgia, US Route 441 heads south along an alignment that's a bit east of Interstate 75 and the exact central vertical axis of Georgia.  In Florida, US Route 441 follows the Interstate 75 corridor until Gainesville; after that, it zigzags south and east across inland Florida.  Florida's Turnpike can be considered a faster and more direct alternate to US Route 441 from central Florida to the Miami area.  ​The southern end is in Miami, at the east-west portion of US Route 41. 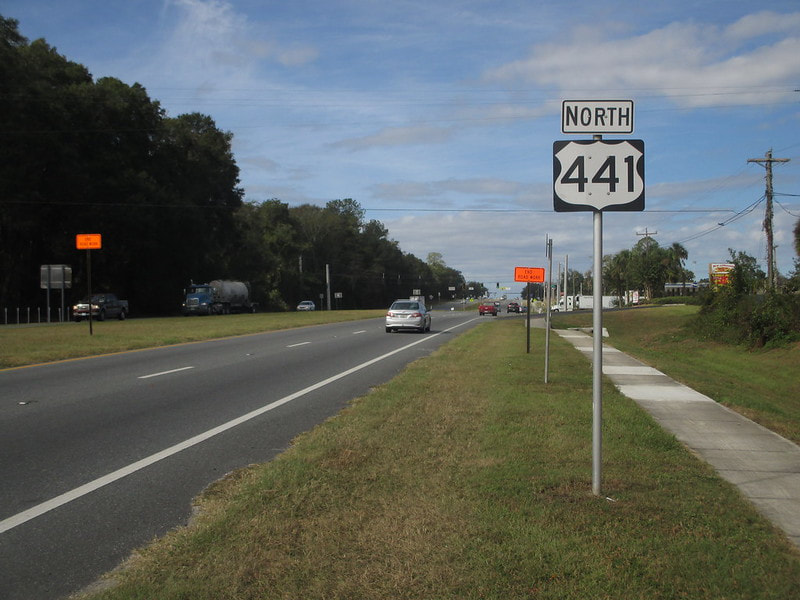 My photo for US Route 441 is a trailblazer seen at an interchange with Interstate 75 in Alachua, Florida (exit 399).  The sign assembly in the photo faces east toward the interchange. This was on the way home from my detour to Florida, taken at the end of my second Gulf Coast trip in November 2016.
Back to the nationwide main page.
Back to the home page.