PAUL ACROSS AMERICA
Interstate 95 is overall the busiest highway on the Interstate Highway System, serving as the predominant connection between the various notable locales along the eastern seaboard.  Interstate 95 runs from Maine to Miami, Florida, serving a plethora of important cities along the way; those cities include Boston, New York, Philadelphia, Baltimore, Washington, Richmond, Savannah, and Jacksonville. The northern end is a Canadian border crossing near Houlton, Maine, in the middle of Maine's eastern land border with New Brunswick.  Interstate 95 runs southwest through Bangor, Augusta, and Portland, to run along New Hampshire's small bit of Atlantic coastline.  After New Hampshire, Interstate 95 enters Massachusetts to skirt around Boston proper and head southwest into Rhode Island (for direct access through Boston, use Interstate 93 instead). Interstate 95 passes southwest through Providence and Rhode Island to meet the northern shores of Long Island Sound, which the highway continues to follow across southern Connecticut.  Next is a jaunt through New York City's northern reaches, crossing into New Jersey via the George Washington Bridge.  Interstate 95 continues southwest across New Jersey, jumping west onto a bridge over the Delaware River south of Trenton, so it can run through Philadelphia.  After that, it goes southwest through Baltimore, around Washington on the Interstate 495 beltway, and south into Virginia.  It goes through Richmond and continues south into the Carolinas.  No major cities sit right along Interstate 95 in North Carolina or South Carolina, but it does serve places like Rocky Mount, Fayetteville, and Florence.  Interstate 95 crosses out of South Carolina near Savannah, Georgia, and in Georgia, it hugs the whole of the state's Atlantic coastline.  The highway stays near the Atlantic coast in Florida, where Interstate 95 passes through Jacksonville to end in Miami.  The southern end of the highway spills onto US Route 1 just south of downtown Miami, Florida. 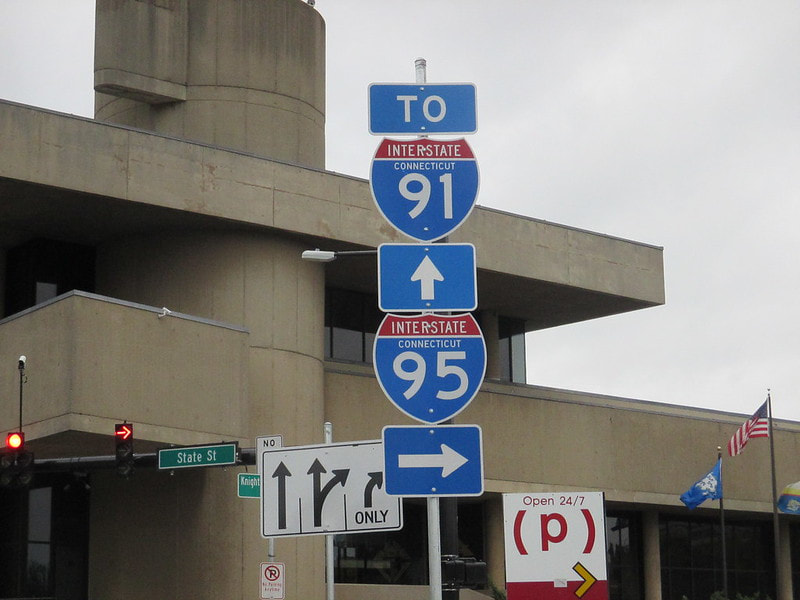 My photo of an Interstate 95 marker comes from New Haven, Connecticut.  New Haven is where Interstate 91 has its southern terminus, at an interchange with Interstate 95 that sits about a mile east of where I took this photo. The sign assembly depicted sits at the corner of State Street and George Street.  To get to Interstate 95, you have to turn right onto State Street south, apparently, as this signage faces west. I guess the sign wants you to find a way to access Interstate 91 that doesn't involve accessing Interstate 95 first, though. This photo was taken during part of the trip to the Northeast in October 2015.
Back to the nationwide main page.
​Back to the home page.